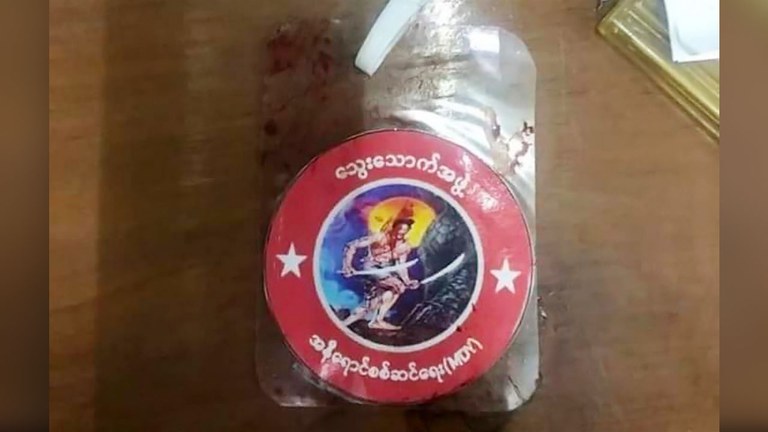 A newly formed pro-junta militia is terrorizing members of the deposed opposition party in Mandalay, residents of Myanmar’s second largest city said, claiming responsibility for eight brutal killings over the past week by placing a signature badge on the bodies of its victims.

All eight of the victims, who were members of the deposed National League for Democracy (NLD) or supporters of the party, were found brutally murdered with badges or cards on their bodies displaying the insignia of a group calling itself the Mandalay branch of the Thway Thauk, or “Blood Comrades,” militia.

A woman close to the Mandalay NLD, who spoke to RFA on condition of anonymity citing fear of reprisal, said the killings had created a sense of panic among party members in the city.

“The situation’s getting worse these days. There’s much more reason to be afraid,” she said.

“Some people won’t even dare stay in their own homes because [Thway Thauk] could come in with guns and take them away. They’d leave the body the next morning. Some [victims] were party members and some weren’t — just party supporters. But everyone is scared.”

She said death threats were also recently found at the homes of some NLD members and supporters.

A Mandalay resident, who also declined to be named, said he believes the attacks are meant to send a message to those protesting the military’s Feb. 1, 2021, coup.

“It’s revenge because soldiers, the police and their families have [since] been attacked [by the armed opposition], so they’re doing the same thing,” he said.

“This group is in civilian clothes, but they must be from the military. In the past, they would at least arrest people under vague laws before killing them. Now, they are openly committing murder.”

Another member of the Mandalay NLD told RFA that several party supporters who have received death threats have fled their homes, fearing that they may become the Thway Thauk’s next victims.

On April 21, the group announced via the Telegram social media platform that it had launched “Operation Red” to “destroy” members of the NLD party and its supporters, as well as anti-junta paramilitaries with the People’s Defense Force (PDF).

Three days later, the body of an NLD village chairman from Mandalay’s Maha Aungmyay township was found along a road by residents of nearby Aungmyay Tharzan township, who told RFA’s Myanmar Service that a Thway Thauk badge had been conspicuously placed on the victim.

The same day, Khin Maung Thein — the owner of the Sein Win Win Tea Shop in Mandalay’s Chan Aye Tharzan township — his wife, Daw Kha Kha, and his brother, U Tin, were reported missing in an apparent abduction.

On Monday morning, residents found Khin Maung Thein’s stabbed and bullet-ridden body in front of the district NLD office in Mandalay along with his severely injured wife, sources close to the NLD told RFA. His brother’s body was discovered later that day near a low-income housing unit on Mandalay’s Strand Road.

The bodies of both men had Thway Thauk badges affixed to them, the sources said. Daw Kha Kha is currently receiving treatment at an area hospital, they said.

Thway Thauk issued a statement on Monday claiming responsibility for the killings and warning of more to come. It said the operation had expanded to include “PDF supporters, members of the fake news media, people living abroad and inciting murder on social media, people who are not part of the armed opposition but are calling for the death of so-called ‘Dalans’ [military informers] … and their family members.”

In the statement, Thway Thauk claimed that it is “not affiliated with the police” or the pro-junta Pyu Saw Htee militia that has sworn loyalty to the military and targeted civilians in attacks in Myanmar’s remote border regions.

On Monday evening, two more men were found shot to death in Mandalay’s Patheingyi township, according to sources, who said the pair had yet to be identified. On Tuesday, residents of Maha Aungmyay township found the body of an unidentified man who had been stabbed in the neck and the body of another man was discovered floating in Mandalay’s Palace Moat.

Sources told RFA that all five of the bodies discovered since Monday exhibited gunshot and stab wounds and had cards reading “Thway Thauk Group – Operation Red MDY” attached to them.

Ko Moe, the brother of Maha Aungmyay township NLD lawmaker Zaw Zaw Aung, became the eighth victim in six days when his body was discovered Wednesday morning near Mandalay’s Thingaza Creek on 26th Street. He had been abducted by an unidentified group two days earlier, according to his family.

When asked about the killings on Wednesday, junta deputy information minister, Maj. Gen. Zaw Min Tun, said that “only one militia group has been formed and no other,” in an apparent reference to the pro-junta Pyu Saw Htee.

In a statement issued Wednesday, the shadow National Unity Government (NUG) said that “action will be taken against those committing terror acts against supporters of the NUG and their families, including the Pyu Saw Htee, in accordance with the law.”

Speaking to RFA, Myanmar-based political analyst Than Soe Naing echoed Mandalay residents who said they believe the Thway Thauk was formed by pro-junta elements to retaliate against the opposition after “hundreds of their village and ward administrators were assassinated,” mostly by members of the PDF.

“I don’t think the junta itself would directly form such groups,” he said. “It may have been formed by junta’s supporters or the Pyu Saw Htee. And I’m sure the junta forces would encourage them or support them.”