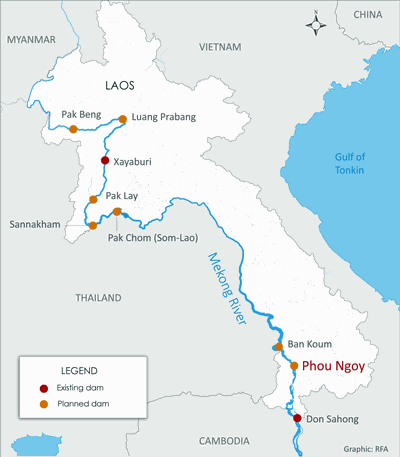 Lao officials will soon submit plans for the Phou Ngoy Dam and hydropower plant to the Mekong River Commission for review, but villagers whose livelihoods would be hurt by the construction worry they will be left out of the process.

“We can’t tell you what day or when exactly we’re going to do that,” said an official at the Ministry of Energy and Mines, who declined to be named to speak freely. “We think we’ll do it at the end of this year. Right now, we’re preparing the paperwork.”

The 728-megawatt Phou Ngoy Dam in southern Laos’ Champassak province will be the seventh of nine existing or planned large-scale hydropower projects on the Mekong River mainstream. Thailand’s Charoen Energy and Water Asia Co. Ltd. is the lead developer of the U.S. $2.4 billion hydropower dam project, whose power is anticipated will be sold to Thailand.

The hydropower dam would be built by two South Korean construction companies: Korea Western Power Co., Ltd. and Doosan Heavy Industries & Construction Co., Ltd. It is slated to be completed in 2029. A power purchase agreement has not yet been signed.

Laos’ government believes that it came greatly boost the country’s economy by becoming the battery of Southeast Asia by selling power generated by dams along the Mekong to its neighbors. But villagers whose lives have been disrupted by the plans say they haven’t been fairly compensated for being forced to move to make way for the progress.

The Mekong River Commission (MRC) is an intergovernmental organization that works with the governments of Cambodia, Laos, Thailand and Vietnam to jointly manage the Mekong.

The Phou Ngoy Dam will be located about 18 kilometers north of Pakse, the capital of Champassak province, and 50 kilometers from confluence of the Mekong River and Mun River, a tributary of the Mekong that flows through northern Thailand.

During the MRC’s consultation process, states and other stakeholders will discuss and review the benefits and risks of proposed water-use projects that may have potential significant cross-border impacts on water flow, water quality and a host of other environmental and socioeconomic conditions.

Surasri Kidtimonton, secretary-general of Thailand’s Office of National Water Resources, told RFA that the consultation depends on all MRC members.

“As for Thailand, we’re right now looking at a lot of documents about the Phou Ngoy Dam project,” he said.

“We’re doing our best to protect our interest,” he told the National News Bureau of Thailand.

‘The losers are the local people’

A representative of the Love Chiang Khong Group, a Thai NGO, expressed concern that project investors and Lao authorities will exclude communities that will be affected by the dam from the ongoing review.

“The Lao government keeps pushing many projects forward, and the investors keep looking for more benefits. The losers are the local people,” the source, who requested anonymity so as to speak freely, said.

The investors and the Lao government have not paid any attention to past studies on the project’s impact and did not allow locals to participate in the decision-making process, he said.

An official at the Lao Ministry of the Information, Culture and Tourism said he was worried in particular about the dam’s impact on Vat Phou, a ruined Khmer Hindu temple complex at the base of a mountain about six kilometers (3.7 miles) from the Mekong River in Champassak province, which is a UNESCO World Heritage Site.

Though the Phou Ngoy Dam is more than 30 kilometers from the city of Pakse, capital of Champassak province, it could have an impact on the Phou Phaphin area close to Vat Phou, he said.

“If the Lao government and the Phou Ngoy Dam developer really want to build this dam, they’ll have to do the Heritage Impact Assessment, similar to the one for the Luang Prabang Dam Project that has been submitted to UNESCO,” he said.

Plans for the Phou Ngoy Dam and hydropower plant have also sparked concern among residents of Khonken village in Champassak province, who fear they may get a raw deal from Lao authorities and the project developer when it comes to compensation for lost land and forced resettlement in other communities.

The project will affect 88 villages, including 57 villages above the dam, and 31 villages below the dam.

About 800 residents in more than 140 households in Khonken village are expected to be the most heavily affected by the project. Most of the villagers are farmers who grow rice and vegetables and raise livestock, while others run small businesses like restaurants and guesthouses to accommodate growing numbers of Thai tourists to the area.

One resident told RFA in late December 2021 that local Lao authorities and the dam developer had conducted a survey asking villagers about their property, shops and fruit trees. Since then, however, they have not heard anything more about the impending relocation.

“We don’t want to be relocated,” he said. “We don’t know where to move to. We’ve been here for years, and we believe that this is our permanent home.”

Another villager said he wants the Lao government to reconsider building the dam.

“Yes, the government builds dams for business, but this dam will destroy the natural beauty and our property.”

Meanwhile, two investors in another hydropower project on the mainstream Mekong signed a tariff memorandum of understanding for the Pak Beng Dam, Laos’ Vientiane Times reported on Wednesday.

The China-backed Pak Beng Dam will be built in the Pak Beng district of Oudomxay province in northern Laos. RFA reported on April 13 that China Datang Overseas Investment had begun moving machinery to prepare the site and to set up workers’ camps in anticipation of a power purchase agreement with EGAT.