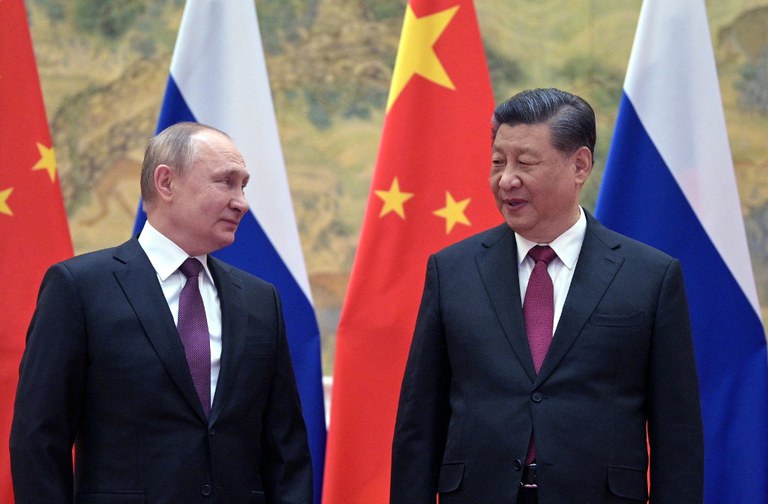 An international alliance of lawmakers has called on more countries to blacklist Chinese companies accused of providing military-industrial support for Russia’s invasion of Ukraine.

The cross-party Inter-Parliamentary Alliance on China (IPAC), whose members hail from 25 parliaments in North America, Europe and Australia, have called on their governments to replicate sanctions made by the U.S. Department of Commerce on Hong Kong World Jetta Logistics, Sinno Electronics, King Pai Technology, Winninc Electronic and Connec Electronic.

In the first five months of 2022, Chinese chip shipments to Russia more than doubled from a year earlier to U.S.$50 million, while exports of components like printed circuits also recorded double-digit percentage growth.

China also exported 400 times more alumina — an important raw material for weapons production and the aerospace industry — to Russia compared with the same period in 2021.

“The signatories call for an export control and scrutiny mechanism to target [Chinese] entities providing support to Russia’s military efforts in Ukraine,” the IPAC said in a July 15 statement on its website.

“Technologies produced on our shores cannot be allowed to further aid Russia’s senseless war in Ukraine,” they said in a joint letter to their foreign ministries.

“Russia’s invasion of Ukraine comes amidst a deepened ‘no limits’ friendship between Moscow and Beijing,” IPAC co-chair Bütikofer said.

“The Chinese government is working around the clock to push the Kremlin’s lies and disinformation on Ukraine across the globe, while Chinese companies continue to supply the Russian military with crucial technologies. Companies which service Putin’s senseless war in Ukraine must be named, shamed and face the consequences.”

The Wall Street Journal quoted the Center for Advanced Defense (C4ADS), a Washington-based security threat research organization, as saying that between 2014 and January 2022, it had tracked down 281 undisclosed shipments of goods that could be used for military purposes made by a subsidiary of China Poly Group, to the Russian authorities.

China Poly Group is controlled by the Chinese central government and its subsidiaries include a major Chinese arms maker and exporter of small arms, missile technology and anti-drone laser technology.

Russian customs records show that antenna parts are used exclusively for radar and are used in Russia’s S-400 surface-to-air missile system, which, according to Russian media reports, has been used in Ukraine.

However, the Center for Advanced Defense Research said it hadn’t detected further China Poly shipments to Russian defense companies since the war began.

The Commerce Department announced the targeted companies on June 29, saying they had supplied items to Russian “entities of concern” before the Feb. 24 invasion, adding that they “continue to contract to supply Russian entity listed and sanctioned parties.”

The agency also added another 31 entities to the blacklist from countries that include Russia, UAE, Lithuania, Pakistan, Singapore, the United Kingdom, Uzbekistan and Vietnam.

“Today’s action sends a powerful message to entities and individuals across the globe that if they seek to support Russia, the United States will cut them off as well,” Under Secretary of Commerce for Industry and Security Alan Estevez said in a statement quoted by Reuters.

“China and Russia carry out normal trade cooperation on the basis of mutual respect and mutual benefit. This should not be interfered with or restricted by any third party,” Zhao told reporters in Beijing in response to the announcement.