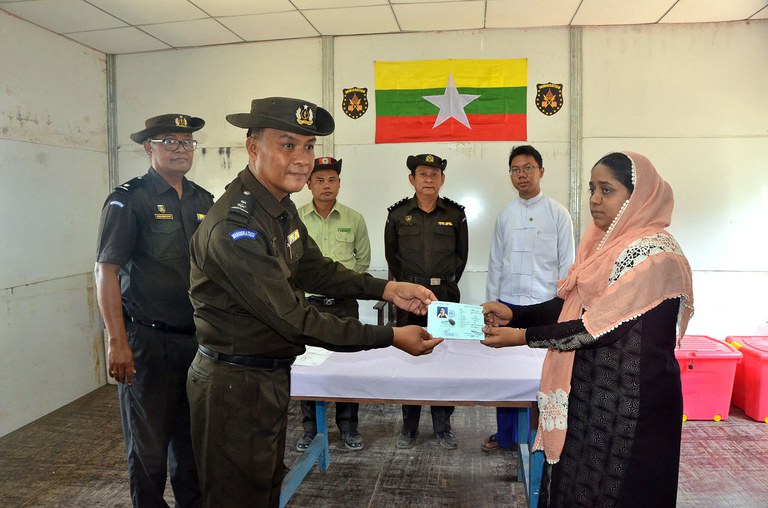 Myanmar’s junta is using identity documents to carry out a genocide of the ethnic Rohingya community, much like the perpetrators of the Holocaust and Rwandan genocide, according to a new report, which calls on the U.N. Security Council to refer the situation to the International Criminal Court (ICC).

The 63-page report entitled “Genocide by Attrition: The Role of Identity Documents in the Holocaust and the Genocides of Rwanda and Myanmar” and published Tuesday by the Southeast Asian rights group Fortify Rights, details how the junta is forcing Rohingya to obtain National Verification Cards (NVCs) that its authors say effectively strip them of access to full citizenship rights and protections.

It also draws on case studies from the Holocaust and Rwandan genocides to demonstrate how authoritarian regimes use such documents to “systematically identify, persecute, and kill targeted populations on a widespread and massive scale.”

“Perpetrators have long used identification documents in the commission of genocide,” said Ken MacLean, co-author of the report, senior advisor to Fortify Rights, and Clark University Professor at the Strassler Center for Holocaust and Genocide Studies, in a statement accompanying the release of the report.

“Evidence from the Holocaust and Rwandan genocides show striking similarities with the ongoing erasure of the Rohingya identity in Myanmar by the junta.”

The report found that identification cards such as those used during the Holocaust and Rwandan genocides contributed to “genocide by attrition,” which it defined as “the gradual destruction of a protected group by reducing their strength through sustained, indirect methods of destruction.”

Such policies have long been in use in Myanmar and continue to play a role in the ongoing genocide of the Rohingyas, the report said, citing interviews with more than 20 Rohingya-genocide survivors, leaked junta documents, and a media analysis of junta-backed news outlets since the military’s Feb. 1, 2021 coup.

It said that Rohingya in Western Myanmar’s Rakhine state described how the junta forces them to carry NVCs to prevent them from identifying as “Rohingya,” restrict their movement, and curtail their ability to earn a living, “creating conditions of life designed to be destructive.” Instead, they are made to identify as “Bengali” immigrants from Bangladesh in what the report said is a bid by authorities to exclude them from citizenship and ethnicity within Myanmar.

The report cited the United Nations Office on Genocide Prevention’s findings that increased politicization of identity and discriminatory measures targeting protected groups are indicators in creating “an environment conducive to the commission of atrocity crimes,” noting that similar legal and administrative tools were used to facilitate the destruction of the Jewish and Tutsi populations, and are now being used against the Rohingya.

“The ongoing denial of Rohingya ethnicity and citizenship are indicators of genocide. The [shadow] National Unity Government has committed to ensuring Rohingya citizenship and inclusion. The junta, however, is still using coercive measures to force Rohingya to identify as foreigners, erasing records of their existence.”

Fortify Rights said that while the connection between identification documents and international crimes is well-recognized, some U.N. officials, embassies, and others in Myanmar have failed to condemn the use of NVCs in targeting Rohingya. In some cases, the group said, they have even endorsed the documents as a solution to the group’s “statelessness.”

The report’s findings demonstrate links between the NVC process and acts of genocide and should be a focus of investigations and legal proceedings, Fortify Rights said.

The violations documented in Genocide by Attrition demonstrate links between the NVC process and genocidal acts and should be a focus of ongoing investigations and legal proceedings, said Fortify Rights.

It called on U.N. member states to cut Myanmar’s junta off from access to arms, finances, and political legitimacy, and urged the U.N. Security Council to refer the situation in the country to the International Criminal Court (ICC).

“U.N. member states must wake up and act now to deny the junta the resources it craves and to hold it accountable for all of its crimes including genocide.”

In 2016, a military crackdown forced some 90,000 Rohingya to flee Rakhine state and cross into neighboring Bangladesh, while a larger one in 2017 in response to insurgent attacks, killed thousands of members of the ethnic minority and led to an exodus of more than 740,000 across the border.

Human rights groups have produced a trove of credible reports based on commercial satellite imagery and extensive interviews with Rohingya about the operations in Rakhine state in 2017, including arbitrary killings, torture, and mass rape.

Gambia has accused Myanmar’s military leadership of violating the 1948 Genocide Convention in Rohingya areas in a case it brought to the Hague-based International Court of Justice. The court is holding hearings to determine whether it has jurisdiction to judge if atrocities committed there constituted a genocide.