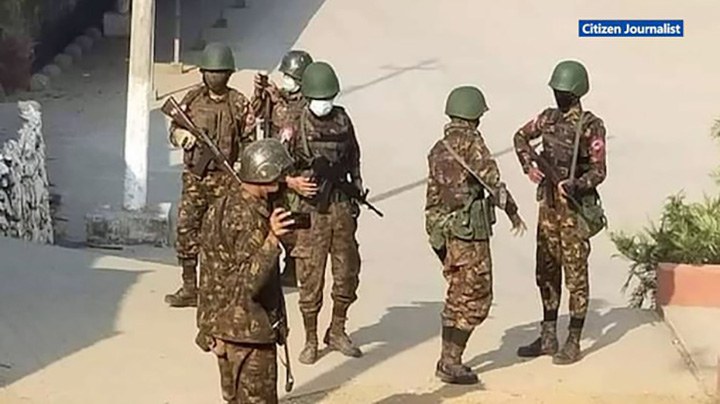 More incidents of violence against civilians by government forces were reported in Myanmar than anywhere else in the world during the first six months of 2022, according to a U.S.-based group that compiles data on conflict in developing nations.

The Armed Conflicts Location and Event Data Project (ACLED), a partner organization of the United Nations, said in a report over the weekend that it had recorded 668 incidents of violence against civilians by state authorities in Myanmar from January to June this year. It ranked Myanmar atop a list of nations that included Afghanistan, Yemen, Kazakhstan, the Democratic Republic of Congo, China, Ethiopia and Iran.

The majority of the violence “involved direct attacks with small weapons on individuals who are unarmed and not participating in demonstrations” against the military’s Feb. 1, 2021, coup, the group said.

ACLED documented more than 11,000 reported fatalities in Myanmar over the same period, mostly as the result of battles between the military and anti-junta armed groups. Explosions and remote violence, as well as violence against civilians, were also leading causes of fatalities, it said.

The group also counted more than 6,000 political protests in Myanmar during the first six months of the year.

“With much of the country in active revolt against the takeover, the military has failed to consolidate control, resorting instead to extreme violence,” ACLED said. “Armed struggle against the junta has continued while anti-coup demonstrations persist.”

ACLED said that violence against civilians by state forces took place in all 14 states and regions in Myanmar in the first half of 2022.

“Civilians are shot at checkpoints, tortured in prisons, and killed following battles in villages,” it said.

“Children have also been targeted, as have family members of anti-coup activists. In several cases, the military has desecrated the bodies of those killed, cutting off body parts and setting corpses on fire.”

ACLED warned that political violence and protest trends seen at the start of 2022 “are likely to carry on into the second half of the year.”

“As the military incurs further losses and fails to gain control of significant parts of the country, it will continue to target civilians with extreme acts of violence. Resistance to the coup — both armed and unarmed — shows no signs of stopping,” it said.

“There will be deaths as long as they hide among civilians,” he said, referring to members of the anti-junta People’s Defense Force (PDF) paramilitary group, which the regime has labeled a terrorist organization.

“No matter how many instructions are issued by the higher authorities, soldiers return fire at the place where bullets come from. As a result, those people caught in-between get hurt. This is unavoidable.”

But political observer Than Soe Naing chalked the high civilian death toll up to the junta’s use of asymmetric warfare in the conflict.

“The PDF forces came from the civilians. A lot of people are dying and getting injured because the military offensives make use of air strikes and naval attacks [in addition to ground forces],” he said.

“The only way to reduce these casualties is for the PDF to surrender or totally annihilate the junta forces.”

Kyaw Zaw, spokesman for the office of shadow National Unity Government (NUG) President Duwa Lashi La, told RFA the junta is committing some of the worst war crimes on earth and “will surely pay the price.”

“Those who gave the orders are also responsible,” he said. “You can’t run away from your crimes.”

Kyaw Zaw pointed to a Sept. 16 helicopter attack on Let Yet Kone village, in Sagaing region’s Depayin township, that killed 19 people, including six children, as an example of how “there is no army as brutal as Myanmar’s.”

In the meantime, he said the NUG is working to provide the people of Myanmar with as much protection as possible.

But Kyaw Win, director of the Burma Human Rights Network, called on the NUG to do more to make the international community aware of the violence facing Myanmar’s civilian population.

“NUG needs to work more closely with the international community. It needs to be more effective. It needs to bring additional resources into the country,” he said. “Right now, [the junta] is already bullying and killing as many people as it wants.”

According to the Burma Human Rights Network, the military is killing more than 100 civilians a month in Myanmar, and Kyaw Win said that “thousands” have died in the 19 months since the coup.

Thailand’s Assistance Association for Political Prisoners (Burma), said authorities in Myanmar have killed at least 2,311 civilians and arrested nearly 15,600 others since the coup — mostly during peaceful anti-junta protests.

NUG President Duwa Lashi La put the death toll at more than 3,000 in a speech marking the anniversary of the armed resistance earlier this month.