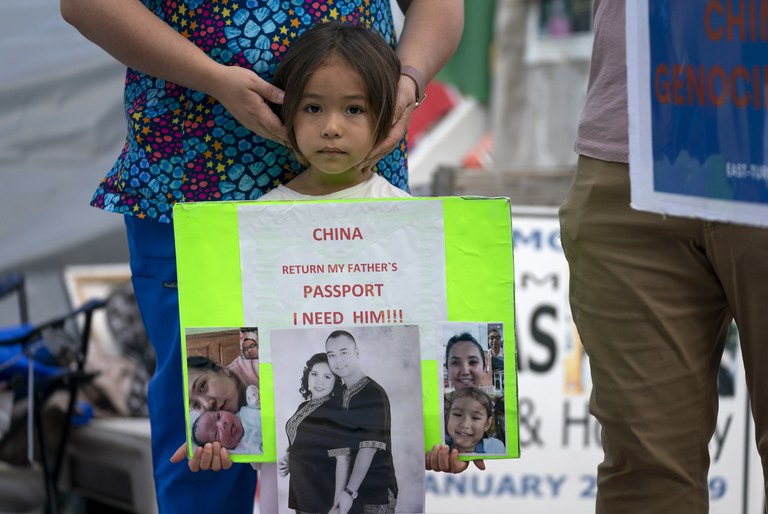 China has vowed to “fight” any United Nations action on human rights abuses against Uyghurs in Xinjiang cited in a damning report by the U.N. human rights chief, while Uyghurs are pressing the world body to move forward with investigations and other concrete follow-up measures.

The report issued on Aug. 30 by U.N. High Commissioner of Human Rights Michelle Bachelet concluded that China’s arbitrary detention and repression of Uyghurs and other Turkic minorities in Xinjiang “may constitute international crimes, in particular crimes against humanity.”

Uyghurs and their supporters want the U.S. and other Western countries to follow up with a U.N. Human Rights Council resolution condemning the alleged violations, an investigation, and a special envoy on Xinjiang.

China, which rejected the Bachelet report as “based on the disinformation and lies fabricated by anti-China forces,” sent a large delegation to the rights council in Geneva this week to condemn the report and present its rebuttal.

“The assessment is based on a presumption of guilt, includes mostly disinformation and lies,” Xu Guixiang, head of the Xinjiang government’s information office, told reporters in Geneva Thursday.

“If some forces in the international community – or even anti-China forces – make so-called ‘Xinjiang-related motions’ or so-called ‘resolutions’, we won’t be afraid,” Xu said. “We will take countermeasures resolutely and fight.”

Bachelet’s report puts a U.N. imprimatur on many findings in investigative reports issued by rights groups, researchers, foreign media and think tanks in the five years since Chinese authorities began detaining up to 1.8 million Uyghurs and other Turkic minorities in internment camps in Xinjiang,

The predominantly Muslim groups have also been subjected to torture, forced sterilizations and forced labor, as well as the eradication of their linguistic, cultural and religious traditions, in what the United States and several Western parliaments have called genocide and crimes against humanity.

Beijing has angrily rejected all charges, insisting it is running vocational training facilities in the region to counter extremism. The Chinese delegation in Geneva this week included large numbers of officials who challenged the reports and a group of Uyghurs who claimed to support Chinese policies.

“The Chinese mission held a side event at the U.N. yesterday featuring five Uyghurs to promote its propaganda that Uyghurs are free and happy in China,” said Zumretay Arkin, program and advocacy manager at the World Uyghur Congress

“Some diplomats from Cuba, Venezuela and Zimbabwe came to support China while some Western diplomats came to hear what China had to say,” said Arkin, who is campaigning for the U.S.-led democracies to introduce a resolution condemning China’s genocide against Uyghurs.

‘Put our words into action’

Group of 7 Foreign Ministers met on the sidelines of the U.N. General Assembly and welcomed the report, pledging to “address these issues with partners, civil society and the international community.”

The G7 ministers “remained deeply concerned by the serious human rights violations in Xinjiang and took note of the overall assessment of the report that some of these violations may constitute ‘international crimes’ in particular crimes against humanity,’” said a statement by German Foreign Minister Annalena Baerbock, chair of the meeting.

In Washington this week, the Uyghur American Association has been staging a hunger strike in front of the White House by leaders of the advocacy group and by three internment camp survivors to demand U.S.-led steps to translate the U.N. report into concrete action.

Chris Smith, co-chair of the Bipartisan Congressional Uyghur Caucus, who visited the hunger strikers outside the White House on Wednesday, introduced a bill calling on the Biden Administration to direct the U.S. mission team in Geneva to sponsor a resolution that would establish a UN commission to investigate the issues raised in the Bachelet report.

“The UN’s recent report demonstrates that Communist China is guilty of serious human rights violations that at a minimum constitute crimes against humanity in the eyes of the world community,” said Smith,

“We must speak out forcefully on these atrocities and put our words into action at the United Nations,” she added.

Kellie Currie, former U.S. Ambassador-at-Large for Global Women’s Issues, called on Biden to “not only introduce a resolution in the Human Rights Council, but you personally need to make sure that it passes by doing everything you can, reaching out to other countries, using political capital and influence that you have with other countries that are on the Human Rights Council to make sure that it passes.”

Reporting and translation by Alim Seytoff. Written by Paul Eckert.