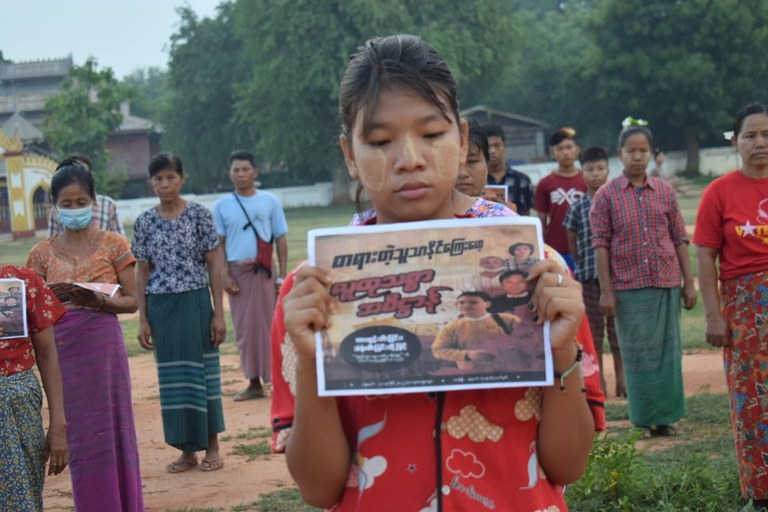 Burmese citizens, angered by the execution of four democracy activists last week and worn down by 18 months of military rule, staged rallies across Myanmar, from major cities to regions that have seen the heaviest clashes between troops and People’s Defense Forces (PDFs).

The Sunday rallies were held in the major cities of Yangon and Mandalay along with the regions of Sagaing and Thanintharyi.

Protesters made vows to fight for democracy, banged pots and sounded car horns as well as promoting their cause on social media.

Residents said since the public pledge of allegiance ceremonies had been announced in advance, security was tighter than usual in the big cities. They also spotted security guards and plainclothes officers.

People were searched and there were some arrests. About 30 Mandalay residents who posted comments on Facebook urging people to participate were arrested by military council forces, according to a member of Mandalay’s Sanga (Buddhist monk) Union.

“There were people who were arrested after writing posts urging people to take part in activities a day in advance. They were arrested due to military informants like Han Nyein Oo,” he said.

“They prepared ambushes in the night and stuck posters on electricity poles urging people not to participate,” the monk told RFA. He said the protests were still a success because many people still took part.

Telegram channels supporting the military council have been campaigning for the arrest and prosecution of those involved in the campaign.

Fighting until the junta is defeated

RFA has not been able to independently confirm the exact number of people arrested for participating in, or inciting people to make, the pledge of allegiance. Nang Linn, a member of the University Students’ Force, told RFA the public pledge was made as a commitment to participate in the anti-dictatorship revolution until the end by people who have suffered since the military took power on Feb.1, 2021.

“The main thing is that we will transform the stubbornness, anger, and bitterness that we are experiencing during this anti-regime revolution into a revolutionary spirit and then we will all march together and fight until we reach the revolution’s goal. Therefore, the public pledge was made by the power of the people,” he said.

Nann Linn said the democracy movement shows the power and defiant attitude of people across Myanmar, while respecting the martyred leaders of the movement.

A woman in Pazondaung township spoke to RFA on condition of anonymity for security reasons. She said she recited the pledge of allegiance and banged pots at home because security on the streets was too tight.

“I saw on Facebook that people planned to recite the vow and bang pots and pans, and cars would sound their horns. I banged a bowl, “she said. “Not every house in my ward banged pots. Some banged iron buckets and others crashed Jam Jam Jam [cymbals]. Cars honked their horns but people didn’t didn’t protest for long,” the woman told RFA.

People in the war-torn areas of Monywa, Yinmabin and Kani township in Sagaing Region and parts of Thanintharyi region also made the pledge of allegiance, holding banners saying “Only the Righteous one wins”.

Protesters across the country said they will continue marching until the goals of the anti-dictatorship revolution have been reached.