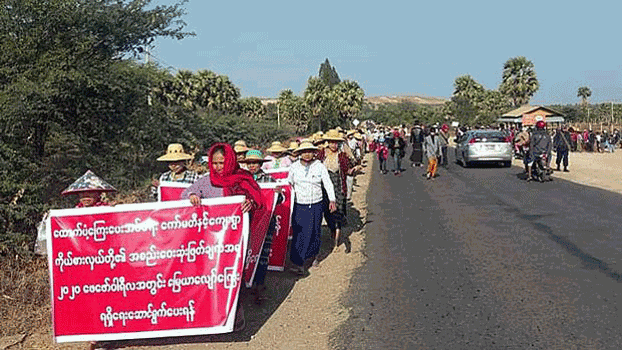 Sagaing has seen some of the fiercest armed resistance to junta rule since the military seized power from the country’s elected government in a February 2021 coup. As fighting between the military and the PDFs has intensified there in recent months, junta forces have conducted an arson campaign targeting rural villages, killing civilians and burning hundreds of homes, leaving thousands displaced.

The junta stepped up raids of villages near the mine site after 16 local People Defense Force (PDF) militias opposed to the military regime issued a statement on April 21 calling for a halt to the controversial Letpadaung copper project, locals said.

A Moe Gyo Pyin resident who lost his home said he had watched from a distance as the soldiers set fire to the village.

“I could see my village being burned from a distance,” he said. “We were all men, not cowards, but we couldn’t do anything except just watch with clenched fists and grit our teeth, looking at each other with tears in our eyes. There was nothing we could do about it.”

The exact number of houses that were burned down is unknown, but about two-thirds of the raided villages are gone, said another resident, adding that the troops left a monastery near the village untouched.

“We heard they’d be coming yesterday morning and left two guys as sentries,” said the resident who did not want to be named for security reasons. “They shelled the village from afar before the raid. Some houses in the village were burned down in the morning and later, the whole village was set on fire in the afternoon. The two men we left behind as sentries were arrested and killed.”

Soldiers cut off the arms of one of the guards — members of a local PDF — and stabbed the other in the abdomen, he said.

After the soldiers left Moe Gyo Pyin during the night, residents returned to the village and found the bodies of the two dead PDF members and cremated them on Wednesday, the villager said.

Military troops detained about 60 people inside the monastery the same day after they entered the old village of Se-de, about two miles from Moe Gyoe Pyin, a resident there said. Others in the village fled.

“We ran from the village straightaway and did not even dare to look back,” the resident said. “Some people carried some of their belongings as much as they could, but others did not. We were so afraid of them. Those who could not run got arrested.”

RFA could not reach junta spokesman, Maj. Gen. Zaw Min Tun, for comment. He said on May 29 that governments have a responsibility to protect foreign investments in Myanmar.

In retaliation for the military’s use of force against the villages, local PDFs said they fired 100 mortars at a power distribution site and the acid tanks inside the mine project site on Tuesday, though the extent of the damage is unknown.

Zwe Htet, a member of Salingyi Revolutionary Army, a local militia group, pledged to attack the Chinese copper mine project daily if the regime’s forces continued burning down area villages.

“Long-range shooting is our main strategy now,” he said. “We used 60 mm, 80 mm and 120 mm shells. The main attack was on the acid tank and the power plant. I saw some fires inside.”

“The main purpose of the revolution is to overthrow the military regime,” he said. “They are now setting fire to villages in Letpadaung. Soon, the military situation will be tense.”

Those who lost homes are moving to places near the monastery and other nearby villages, though Letpadaung area residents said their phone lines and internet service were still down.