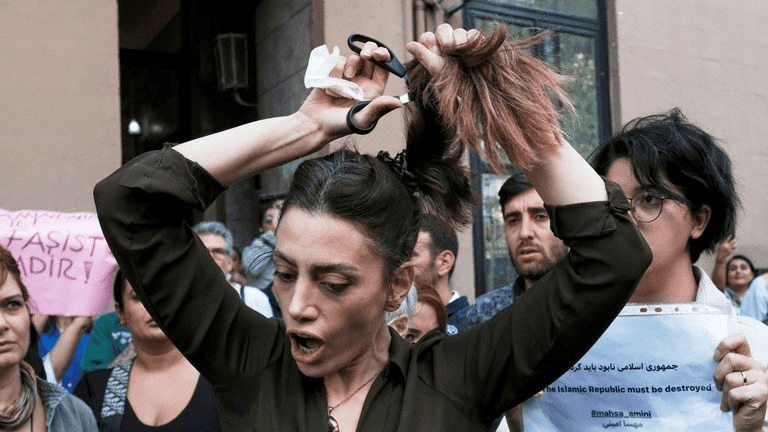 The death of Mahsa Amini on September 16 sparked the largest protests in years in Iran, which have since erupted.

The nation’s morality police had detained the 22-year-old for not donning her hijab properly and wearing skinny jeans, which are charged with enforcing stringent standards about dress and behavior.

Amini’s family claims that she was beaten and had many blows to the head. Police and the administration have refuted the allegations, saying she died of an “underlying condition.”

Iranians of different ages, ethnicities, and gender identities have participated in the protests, although young people have been the majority among those who have turned to the streets.

“women started this wave of protest, But, everyone else joined.  Women and men are shoulder-to-shoulder. All of Iran is united.For the first time in the history of Iran since the Islamic Revolution, there is this unique unity between the ethnicities. Everyone is chanting the same slogan. Their demand is the same.”

Ramyar Hassani, spokeswoman for the Hengaw Organization for Human Rights,

People used all the means to protest

According to Hassani, nearly all “peaceful, non-violent” protest tactics have been used in Iran.

Women have burned their hijabs during enormous street protests that have taken place in all of Iran’s main cities and numerous small towns, frequently while dancing at the same time. Others have even had their hair chopped off.

Schools, universities, and the country’s crucial oil industry have all reported strikes, and businesses have frequently closed their doors.

On November 21, the Iranian football team declined to play its national anthem during the World Cup in Qatar, and supporters have screamed anti-regime chants outside of stadiums.

In Iran, violent skirmishes have occasionally broken out, and protesters have set security force headquarters on fire.

The attempts to crackdown

Hassani claims that security forces have been suppressing protesters “quite severely” since the beginning, particularly in regions where there are ethnic minorities, such as Kurdistan and Balochistan.

People have been shot for blowing their horns in support of demonstrators, and a large number of journalists (including those who broke the news of Amini’s death), attorneys, celebrities, athletes, and members of civil society have been imprisoned.

According to the US-based Iran Human Rights Activists News Agency, at least 458 people have died and several hundred have been injured as of December. This number includes 63 children. There have been more than 18,000 detentions.

But given how much gets unreported, these numbers could perhaps be far higher.

According to the Iranian authorities, more than 60 members of the security forces have been killed.

To disperse protesters in Kurdish areas, troops, heavy weapons, and military vehicles have been sent there. Here, Hassani alleges that murders were committed without regard for the victim, and he adds that detainees were housed in warehouses as jails overflowed.

Although there is no proof, the administration has accused other nations like Israel and the US, which it refers to as the “Great Satan,” of inciting unrest.

In November, Iran’s top court demanded that the “main elements of the riots” receive severe penalties, urging people to “avoid showing unnecessary sympathy” at this time.

France and Germany strongly condemned the execution of the first protester by the Iranian authorities in December for alleged “corruption on earth,” or efsad-fil-arz. We anticipate more executions.

The deep-rooted cause of the protests

The Islamic policies of the government, particularly those pertaining to dress code, have stoked deep-seated resentment in Iran. There were protests even when the hijab (headscarf) became required in 1983; discontent has persisted ever since.

According to Roulla, an Iranian political activist and researcher who requested anonymity for security reasons, frustrations have gotten worse since hardliner Ebrahim Raisi took office in 2021 and stepped up regulation of women’s attire.

Protests, however, also focus on the shortcomings of reform.

Iranian human rights attorney Shadi Shar claims that for many years, Iranians greatly bet on the notion that things would improve as promised by reformist politicians.

“But nothing took place… The Islamic Republic itself needs to fall, is the message that is now loud and plain.“

Hassani claims that while ordinary Iranians see no future, “young people on the streets watch the sons and daughters of those in power having a comfortable existence as their parents rob the people’s riches.”

International sanctions were imposed on Iran after then-US President Donald Trump withdrew from the Iran nuclear deal in 2018, which was designed to prevent Tehran from developing a nuclear weapon. Iran’s currency fell precipitously as a result, with ordinary Iranians bearing the brunt of these economic blows.

Why these protests are different

The protests of today, which are larger and more widespread than those of 2019, stand out because practically all facets of society have come together to support them.

As opposed to the “middle-class issues” of vote manipulation that dominated unrest in 2009, according to Roulla, lower segments of society protested fuel price increases in 2019.

He says Amini was an “average girl,” which is the “basic explanation” of why there is more harmony now.

She wasn’t an activist, nor was she from a large city. It’s a lot simpler to empathize with that because she was murdered after being kidnapped from her family.

The Iran Revolution is in full swing. Ij-Reportika will cover all its facets even though the Iran regime has ordered several gags on the publication of the truth.