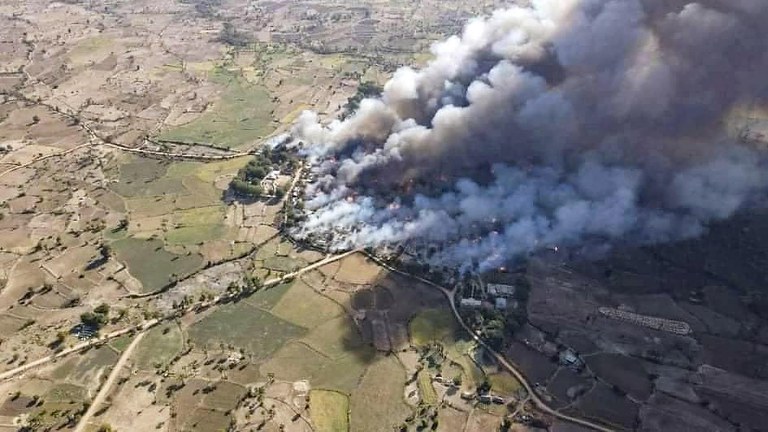 Junta troops torched more than 500 homes in five villages over the past three days in Myanmar’s Sagaing region, residents said Thursday, where nearly three-fourths of townships have been cut off from internet access since early March amid ongoing military raids.

The arson attacks occurred between April 25 and April 27 in the Sagaing townships of Mingin, Khin Oo, and Shwebo, residents told RFA’s Myanmar Service, speaking on condition of anonymity out of fear of reprisal.

Soldiers destroyed around 200 and 70 homes in Mingin’s Thanbauk and Zinkale villages, respectively, on April 25, some 220 homes in Khin Oo’s Thanboh village the following day, and an unconfirmed number of homes in Shwebo’s Malar and Makhauk villages on the evening of April 27, they said. The number of homes set alight in Shwebo township was not immediately clear because residents remain in hiding.

One resident of Khin Oo said that the fires in Thanboh broke out early in the morning April 26 after two columns of troops entered the village.

“The fires were burning almost the whole day and died down only at about 5 p.m.,” he said.

Aung San Myint, a 35-year-old villager who was arrested during the raid on Thanbo village and forced to work as a guide, was later shot dead by the soldiers who held him captive, he said.

Residents said Thanboh village is home to around 300 houses and is adjacent to Magyee Tone village, where many members of the pro-junta Pyu Saw Htee militia live. They said that while the military and Pyu Saw Htee often enter the area, Tuesday marked the first time homes there had been set on fire.

A resident of nearby Kyauk Myaung sub-township, who declined to be named for security reasons, said the attacks likely took place after informants reported to the army that members of the anti-junta People’s Defense Force (PDF) paramilitaries are active in the area.

Other sources said that the military unit responsible for the arson attacks was accompanied by Pyu Saw Htee fighters and identified it as the Kalemyo township-based Infantry Battalion No. 87, with an estimated force of around 150 troops.

However, in a statement on April 4, he told RFA that soldiers were not responsible for arson attacks in Sagaing.

“Some PDFs and [armed ethnic] groups attacked villages where [pro-junta] militias have been formed,” he said at the time.

“They set the villages on fire when they leave and blame the military or Pyu Saw Htee. … When villages are destroyed by fire, it is the [junta] who must rebuild them. So, we have no reason to burn the villages.”

Since early March, internet access has been cut off in 27 of the 37 townships under the administration of Sagaing — including the embattled townships of Debayin, Kani, Pale, Khin Oo and Shwebo, where much of the fighting between the military and the PDF has taken place in the region.

A member of the Monywa University Students’ Union, who declined to be named, called the shutdown a violation of residents’ right of access to information.

“People in these areas have no way of learning about what is happening in other parts of Myanmar, about the political situation outside Sagaing region, or how the fight against the military is going on in various townships,” he said.

“They only have information from those around them, as if they are cut off from the outside world.”

Residents have been reduced to sharing information between themselves via weekly text messages, he said.

Data for Myanmar, a research group that monitors how conflict affects communities, recently said that as of April 16, junta troops have torched more than 9,000 homes across the country since the military seized power in a Feb. 1, 2021, coup. More than 60% of the homes — the most of any of Myanmar’s 15 states, regions and territories — were located in Sagaing, the group said.