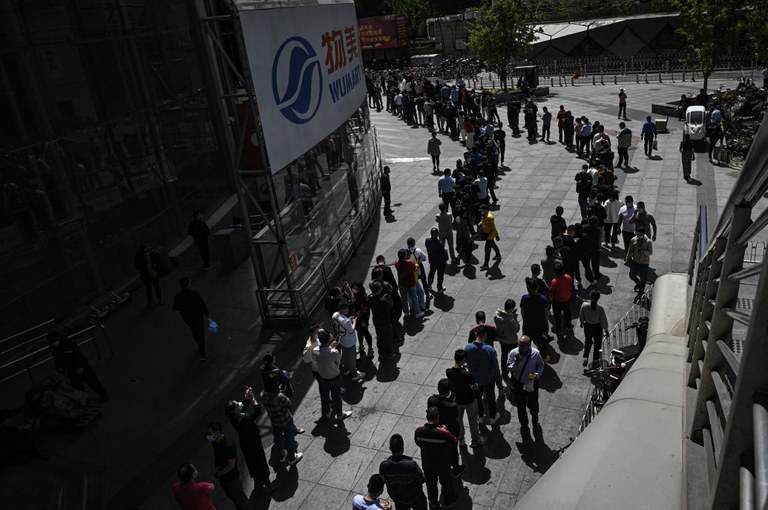 The ruling Chinese Communist Party (CCP) on Friday promised a slew of measures to help the country’s COVID-battered economy.

The CCP’s Politburo met on Friday to discuss economic growth, which is targeted to reach 5.5 percent this year, an unlikely target in the absence of further stimulus given the supply-chain havoc caused by the pandemic and risks linked to the war in Ukraine.

“The COVID-19 pandemic and the Ukraine crisis have led to increased risks and challenges, increasing the complexity, severity and uncertainty of our country’s economic development, and posing new challenges to stable growth, employment, and prices,” the meeting, chaired by CCP leader Xi Jinping, said in a communique summarized by state news agency Xinhua.

Beijing’s dynamic clearance, zero-COVID policy would continue, but measures would be taken to “keep the economy operating within a reasonable range,” the summary said.

Measures will include a boost to infrastructure construction and other stimuli to boost domestic demand and jobs, as well as tax rebates, tax and fee cuts and “monetary policy tools,” it said.

Measures should “stabilize and expand employment” and “maintain overall social stability,” as well as a national strategy to restore the country’s domestic supply chains and logistics industry, which has been left fragmented by COVID-19 restrictions in major cities and ports, particularly Shanghai.

Care should be taken to prevent rare and unexpected “black swan” incidents, as well as more predictable “gray rhino” developments from gathering momentum and getting out of hand, the report said, using buzzwords associated with Xi’s personal brand of political ideology.

Reuters quoted a person with knowledge of the matter as saying that the government would be meeting with internet platforms next month.

Nomura’s chief China economist Ting Lu said he predicts an economic growth rate of just 1.8 percent in the second quarter of this year, with annual GDP growth of 3.9 percent for the whole of this year.

The move comes after a U.S.$8 billion selloff of Chinese government bonds by foreign investors in March, with foreign capital outflows of U.S.$17.5 billion in the same month.

Foreign investment in Chinese funds fell by 70 percent in the first quarter of 2022, compared with the previous quarter, while the yuan hit a six-month low against the dollar and China’s foreign exchange reserves fell by U.S.$25.8 billion between the end of February and the end of March.

Online comments were skeptical that the Politburo could do much to affect the mass outflow of foreign capital.

“The higher-ups shout their slogans, while the in-betweens have no policy to implement them, and the lower ranks are just cashing in,” according to one comment seen by RFA on Friday.

Others said little would change economically while the CCP’s zero-COVID policy was still in place.

The meeting came after the Wall Street Journal quoted a number of people as saying that Xi is insisting that China’s economic growth must exceed that of the U.S. this year. The U.S. posted a 5.7 percent GDP growth rate in 2021.

“[Zero-COVID] must have caused a significant downward revision [in GDP growth forecasts], a very serious downward revision,” Zhu told RFA. “The real estate sector is stuck, and they’ll have to rely on money supply [to boost] domestic demand.”

“China’s economy is based on value-added manufacturing, but global prices for raw materials are on the rise around the world, squeezing profits in that sector, so that will also hurt GDP,” Zhu said.

In a commentary for RFA, commentator Wang Dan said recent moves by the CCP to regulate entire sectors of the economy by limiting private-sector involvement had affected the labor market, where 11 million new entrants are expected this year.

Wang said Xi will likely solve these structural problems by ordering up the results he wants to see.

“Why do I say he can still manage it? Because companies in China … do as he tells them,” he said. “This has to do with Xi Jinping’s status and his bid for [a third term] at the 20th party congress.”

He said the likelihood is that Xi regards his COVID-19 policy as a crucial part of attempts to demonstrate the superiority of China’s political system to the rest of the world.

“But if he elevates his disease control and prevention policy to be a part of that attempt, he will be forcing himself to ride a tiger,” Wang warned.

Zhu said stock markets in China, even pre-pandemic, had been dealt a huge blow by Xi’s insistence on the “common prosperity” model, which saw a nationwide ban on the highly lucrative private education and tutoring sector.

“During the past five years, mainland China and Hong Kong have been the only places where stockmarkets are falling, which is not a good sign,” Zhu said. “Xi Jinping is trying to introduce some bullish sentiment with certain remarks, but it’s just a brief respite.”

“It’s not so easy to correct mainland Chinese markets when they are this weak,” he said, adding that GDP figures are already likely artificially inflated, or shares would be performing better.

The meeting came as authorities in Beijing shut down more businesses and placed more residential compounds under lockdown on Friday, while extending contact-tracing.

Meanwhile, video clips of people banging pots and pans from Shanghai apartments in protest at the ongoing lockdown have been circulating on social media.