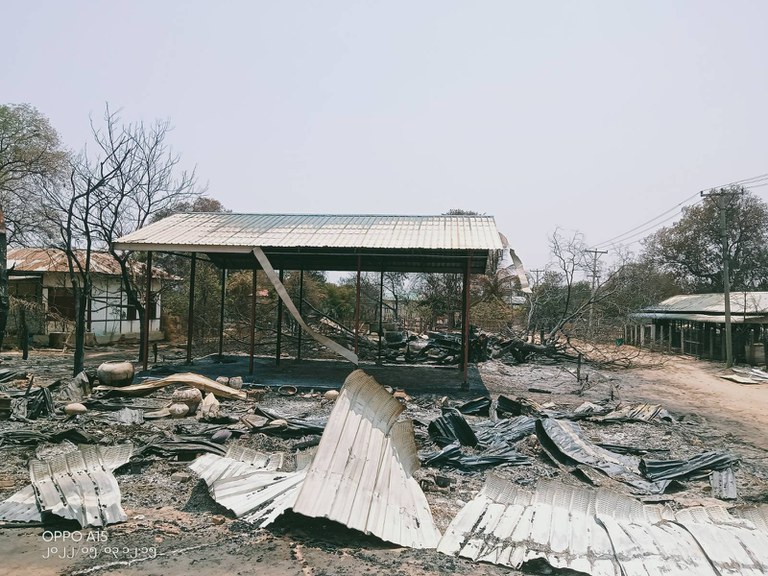 A joint force of military troops and pro-junta militiamen killed 20 civilians earlier this week in Myanmar’s war-torn Sagaing region, according to sources, who said soldiers forced some of the victims to serve as human shields and executed several others as they lay face down in the dirt.

The victims, who included men in their 70s and one young woman, were all killed on May 2 and included three people from Seikhun village and six from Nyaungbin Thar village; both in Shwebo township, nine from Butalin township’s Otpo village, one from Khin-Oo township’s Innpat village, and one from Ayardaw township’s Malae Thar village, sources told RFA’s Myanmar Service.

A resident of Otpo village, who spoke on condition of anonymity citing fear of reprisal, said the victims were all civilians who had been hiding from the soldiers in an unoccupied Buddhist convent.

“We heard the army was coming from Butalin … and the villagers fled in fear. Many went to the convent to take shelter and that’s when they met the soldiers head-on,” the resident said.

“The detainees were told to lie on their bellies on the ground and were shot in the head. A child was ordered to go away from the site before they killed the victims.”

The convent’s nuns, who might have served as a deterrent to the troops, had earlier fled the area after receiving reports of the advancing column, the source said.

Troops also set fire to several vehicles in and around Otpo village, he said.

On the same day, three villagers were killed, and six others were injured when troops engaged in a firefight with anti-junta People’s Defense Force (PDF) paramilitaries near Seikhun and Zeebyugone villages and shelled the area, other sources told RFA.

A resident of Seikhun, who also declined to be named, said the troops had come to the village from the seat of Shwebo township, around 7 miles to the north, “to clear the area.”

“The soldiers entered the village, where there are monasteries. The people hiding in the monastery compounds were used as human shields,” he said.

“But before entering the village, they opened fire with heavy weapons from all sides. Three people died and six others were injured because of the shelling.”

Of the three dead, one 25-year-old man was “burned to death” by the troops, while the other two “died of gunshot wounds,” the source said.

A resident of Nyaungbin Thar said six villagers were shot dead on May 2 after the military raided the tract for the second time in a week.

“They burned Kyar village earlier, stopped for a while in Panyan village, and then returned to Nyaungbin Thar. The local paramilitaries detonated a few landmines and held them off, so the troops withdrew and began shelling the area. Two villagers were wounded,” they said.

“After that, the soldiers moved towards Khin-Oo, where they killed five villagers. One man was killed inside a house where he was captured. The troops brought along Pyu Saw Htee from [nearby] Khun Daung Gyi village.”

In addition to the killings in Shwebo and Butalin townships on May 2, sources said that at least one man died when troops set fire to more than 300 houses in Khin-Oo’s Innpat village and a blind man perished in another arson attack on Ayardaw’s Malae Thar village that day.

Graphic photos obtained by RFA of the aftermath of the incidents showed several victims lying crumpled on the ground in their own viscera. In some cases, the subjects of the images were unrecognizable because of the trauma inflicted on their bodies.

Previously, the deputy minister has rejected reports of troops killing civilians as “baseless accusations,” and blamed such incidents on the PDF, which the junta has labeled a terrorist group.

The military cut off internet access to most townships in Sagaing region beginning in March this year when it launched a scorched earth campaign in the area. RFA has received frequent reports of arrests, looting, rape, torture, arson, and murder in the region.

Aung Kyaw, a former Member of Parliament for the deposed National League for Democracy (NLD) in Butalin township, said the military is targeting innocent civilians because it is unable to defeat the PDF.

“The PDF groups have planted landmines in the area and when [the army] suffers casualties, they kill anyone they encounter as an act of revenge,” he said.

“The military has become a band of terrorists, violating every law. They are completely inhuman.”

Aung Kyaw said there are now daily protests in Sagaing against military persecution.

According to Data for Myanmar, which monitors troop arson attacks, a total of 11,417 homes have been destroyed by fire across the country since the military seized power in a Feb. 1, 2021 coup. Sagaing saw the most arson attacks of any other state or region in Myanmar, with more than 7,500 homes burned.

The Thailand-based Assistance Association for Political Prisoners said security forces have killed 1,822 civilians since the coup and arrested some 10,535 others, mostly during peaceful anti-junta protests.