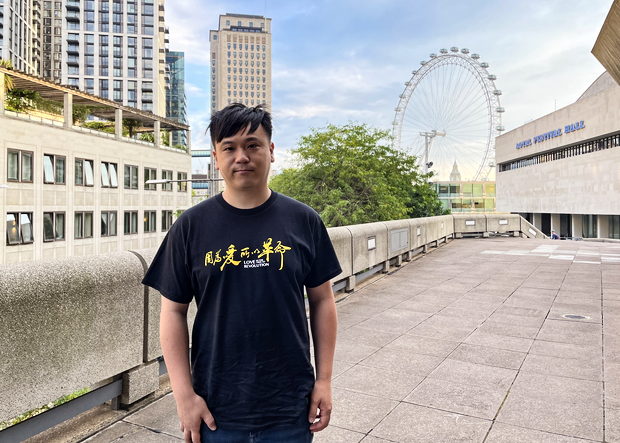 Three years after millions took to the streets of Hong Kong in protest at the city’s diminishing freedoms and to call for fully democratic elections, a new documentary is showing audiences around the world just what motivated them to risk arrest, injury or worse at the hands of riot police.

Beijing has long claimed that the movement was instigated by “hostile foreign forces” who wanted to challenge and undermine the ruling Chinese Communist Party (CCP) by fomenting dissent in Hong Kong.

But for documentary film-maker Ngan Chi Sing, the complex political and psychological forces that drove people to face down an increasingly repressive regime can be expressed as a single thing: love. And he’s not just talking about romance, although that did play a part.

“There is also the love of one’s own land, love for this city, and the love of the older generations for our young people, for those Hongkongers who sacrificed [their well-being and freedom] for people they had never met and didn’t know,” Ngan told RFA in a recent interview.

“I often say that this was the truest and most precious thing about that time, for me, anyway,” said Ngan, who goes by the English name Twinkle.

Ngan started out with the intention of recording the protests, turning up at the front line, day in, day out, shooting intense footage of pitched street battles and chanting crowds, and interviewing young Hongkongers insistent that the government listen to their five demands: revoke plans to allow extradition to mainland China; allow fully democratic elections; release all protesters and political prisoners; chase down those responsible for police violence and stop calling protesters “rioters.”

Then leader Carrie Lam eventually withdrew plans to amend the law to allow the extradition of alleged criminal suspects to face trial in mainland China, but not before the city had erupted in a summer of protest that saw crowds of one and two million people march through the streets, the occupation of the Legislative Council, and the defacement of the Chinese flag and emblems outside Beijing’s Central Liaison Office.

But the city’s government — under intense political pressure from Beijing — has since gone full tilt in the opposition direction when it comes to the other four demands.

Instead of an amnesty or an end to the government’s use of “rioters,” to describe the protesters, there is now an ongoing crackdown on peaceful political opposition and public dissent.

Why take the risk?

More than 10,000 people have been arrested on protest-related charges, while the authorities are prosecuting 2,800 more under a draconian national security law imposed on the city by the ruling Chinese Communist Party (CCP) from July 1, 2020.

Given the risks, why did so many turn out to defend themselves from behind makeshift barricades of traffic barriers, umbrellas and trash cans? It’s one of the first questions Ngan puts to a masked protester on the front line in 2019.

“I am a Hong Konger born and bred, and Hong Kong is now under occupation,” comes the hoarse reply.

Ngan started shooting the film during the last June 4 candlelight vigil for the victims of the 1989 Tiananmen massacre, initially without any aim other than recording these events for posterity.

He said he still recalls vividly that many participants that night in Victoria Park held their candle in one hand, and a leaflet calling for a public rally against plans to allow extradition to mainland China in the other.

But he didn’t always feel a sense of journalistic separation from what he was filming.

“The front-line protesters pulled me into the umbrella barricade formation … sheltering me and washing my eyes so I could carry on filming that day,” Ngan he said. “This had a dramatic impact on me.”

“I had previously been looking at these young people through my lens, like a journalist, to film the dangers they faced, and to see whether they were afraid,” he said. “But in that moment they rescued me, I became one of them.”

Ngan said he had very little experience of film-making or journalism before the protest movement, but after the incident in Sheung Wan, he decided to make a film from his footage.

He shot footage and interviewed people for more than a year, until February 2020.

In November 2021, fearing his materials would be confiscated by police, he brought everything to the U.K., where he is currently applying for political asylum.

One of the things that struck him was the relative lack of experience of nearly everybody involved in the protests. As the movement’s “hands and feet” were increasingly being arrested and taken off to detention centers to await trial, new protesters took their place at the front line who were often younger and less experienced than their predecessors in the movement.

Nonetheless, the movement embraced everyone, and it was this aspect that drove Ngan’s storytelling when cutting the film.

“I am an amateur myself, and no one has heard of me,” Ngan said. “The people behind the scenes and the people I interviewed were amateurs too.”

“So many people paid a price and are now silently living with consequences they should never have had to bear,” he said. “The political prosecutions are still happening.”

Now in London, Ngan feels that he can give them the recognition that is their due.

“These amateurs will never be in the spotlight, so I want to bring out their voices and their stories,” he said.

“Love in the Time of Revolution” has screened at a documentary festival in Switzerland, a Hong Kong Film Festival in Sydney, and will premiere in the U.K. on Aug. 20.