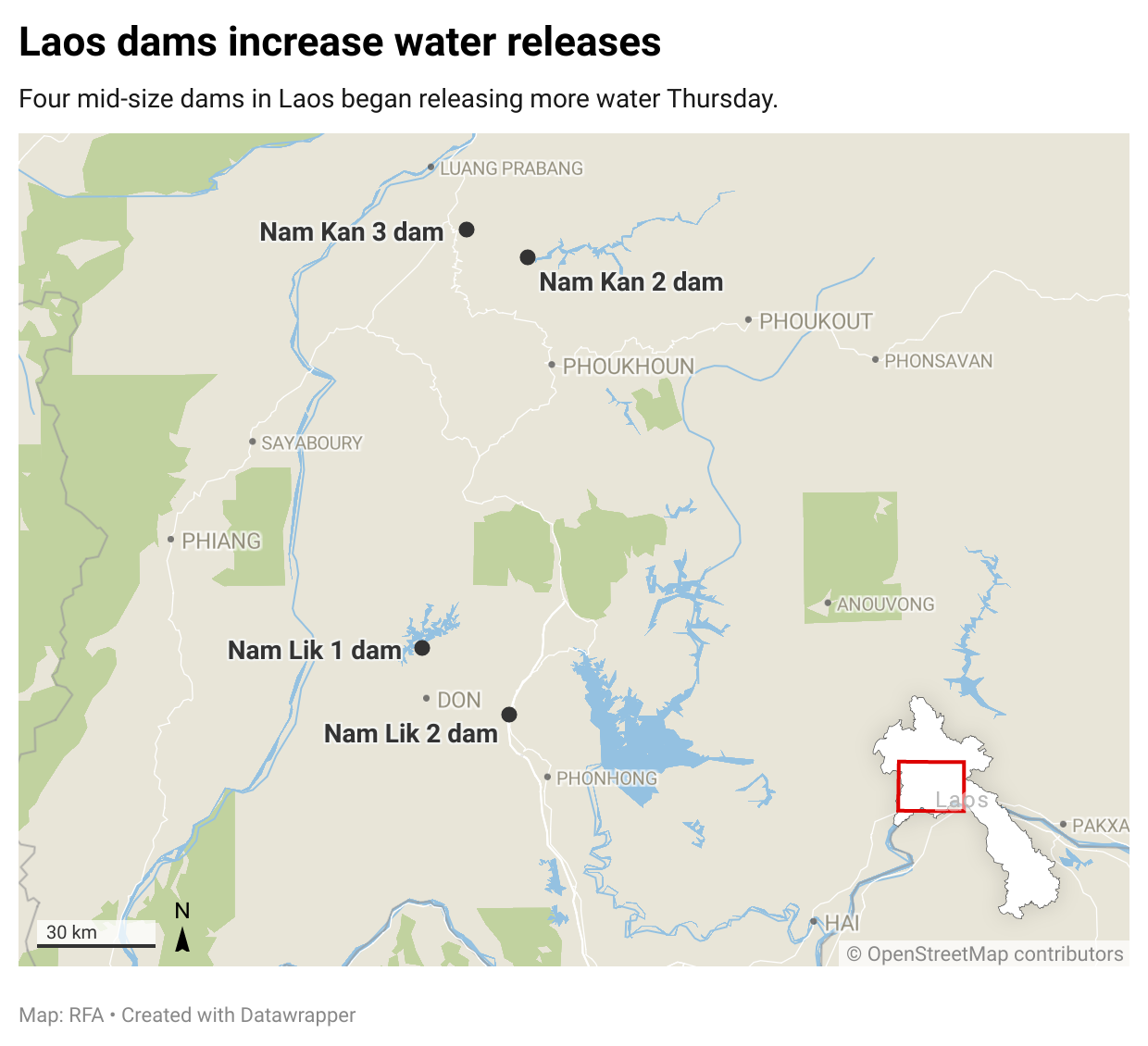 Villagers in northern Laos are once more scrambling for dry land after water releases from nine upstream dams to relieve pressure after a week of heavy rain caused flooding in some areas.

The Meteorology and Hydrology Department of the Lao Ministry of Natural Resources and Environment predicts even more rain is in store for the region as a tropical depression is expected to cover northern Laos from Aug. 19-28.

Residents told RFA’s Lao Service that their homes, places of work and farms are now flooded. Many said they had to escape to higher ground.

“Our farm was on low ground, and our floating restaurant on the Khan River is damaged,” a resident of Samakhixay, Xeing Ngeun district, Luang Prabang province, who like other sources in this report requested anonymity for safety reasons, told RFA Friday.

“We’re now trying to save our livestock by moving them to higher ground. We hope that the Nam Khan dams are able to control the water soon. We don’t worry much about water from the rain, but we do worry a lot about the dams because we’re afraid they could break,” said the source.

Laos has aggressively built dozens of dams on the Mekong River and its tributaries in its controversial economic strategy to become the “Battery of Southeast Asia” by selling the generated electricity to neighboring countries.

But villagers living near the dams say the projects have upended their lives. Many residents have had to move, often facing protracted disputes over compensation and being relocated to less fertile lands, while those left behind sometimes have to scramble for higher ground if the dams release water without prior notice.

A resident of Feuang district, Vientiane province, told RFA on Friday that the two Nam Lik dams had begun releasing more water the day before.

“The Lik River has gone up about 50 centimeters [about 20 inches]. Up to now, our floating raft guesthouses have not been affected yet,” the Feuang district resident said.

Because the Mekong has many tributaries, a dam that releases water in one spot may force others downstream to do the same, as was the case with the Xayaburi Dam, according to an official of the  Agriculture and Forestry Department of Xayaburi Province.

Multiple sources told RFA that authorities issued safety warnings prohibiting floating guesthouses from receiving tourists, in some cases saying that the water level could increase as much as four meters. Others were concerned that the flooding could sweep away fishing boats and flood roads, isolating residents in the process. Many locals said they were packing their valuables before heading to higher ground.

“The Ministry of Energy and Mines, the authorities of Feuang district and of our village should make sure that the warning reaches all the residents because this time of the year is the rice planting season, and many villagers stay at their farms for several months to plant rice,” a resident of Hat Don Kang Yai Village in Feuang district said.

“The authorities should also give notice several days in advance, so that the business owners have enough time to prepare,” the source said.

Government officials told RFA it is standard practice for the dams to release water in heavy rains, and that dam operators warn the authorities in advance.

“The Xayaburi Power Company wrote to us on Saturday that our department should inform all districts below the Xayaburi Dam,” an official of the Energy and Mines Department of Xayaburi province told RFA.

“We’re gathering information about the impact and the damage caused by the flood and water discharges,” an official of the Ministry of Energy and Mines told RFA. “The water is coming from all directions, from Luang Prabang province and other northern provinces.”

Xayaburi province issued a warning on August 13 to all provincial districts about releases from the Xayaburi and Nam Ou dams.