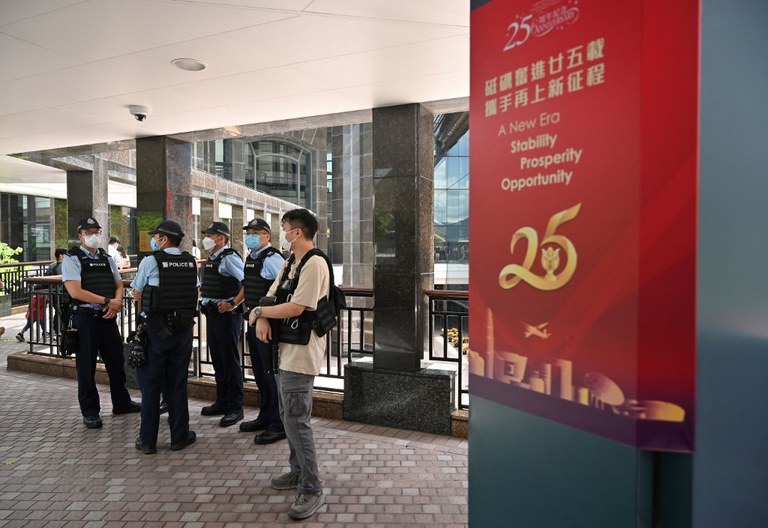 Authorities in Hong Kong Thursday suspended flight bans on specific routes and boosted COVID-19 testing requirements for newly arrived passengers, in an apparent bid to send a message that it remains an international city despite U.S. sanctions on its leader John Lee.

Since being sworn in by ruling Chinese Communist Party (CCP) leader Xi Jinping on July 1, Lee has called on people to tell the rest of the world about Hong Kong’s “stories and achievements,” echoing Xi’s call for state media to “tell good stories about China.”

But critics pointed to a lack of space in mandatory government quarantine facilities and a plummeting international reputation on human rights and freedoms, both of which will likely hamper Lee’s efforts to rebrand Hong Kong.

“Further enhanced and more frequent [PCR] testing for inbound persons is more effective in halting the importation of cases,” the government said in a statement. “[We have] has therefore decided to suspend … the route-specific flight suspension mechanism until further notice.”

Earlier, Lee had urged members of the city’s Legislative Council (LegCo) and media to “tell others about Hong Kong’s stories and achievements.”

“This will create a sense of identity, including an international identity, and everyone will feel proud to be from Hong Kong,” Lee said, adding: “We have to work together to build this awareness.”

A EuroCham survey found in March 2022 that 25 percent of companies that responded to its poll had said they will “fully relocate” out of the city during the next 12 months, citing highly restrictive COVID-19 measures.

More than 50 percent said they were having trouble attracting talent from overseas, the survey said.

But Hong Kong’s international image is also being marred by the fact that Lee and many of his senior officials are subject to U.S. sanctions as individuals deemed responsible by Washington for implementing a draconian national security law, that ushered in a citywide crackdown on political opposition and peaceful dissent in the wake of the 2019 protest movement.

Hong Kong current affairs commentator Chung Kim-wah said Lee will find it hard to leave Hong Kong, as any company — including banks and credit card companies — with a presence in the U.S. is now proscribed from doing business with him.

“He has been sanctioned, so it’s hard for him to leave Hong Kong,” Chung told RFA. “He can only use cash, so how can he tell a good story about Hong Kong?”

“It doesn’t matter how well he tells it; there are so many places he can’t actually get to … [including] important trading partners of Hong Kong, places where he might go to attract investors,” he said.

Nearly all of Lee’s predecessors since the job was created with the 1997 handover, including shipping magnate Tung Chee-hwa, former financial chief Donald Tsang and pro-Beijing stalwart Leung Chun-ying, made sure that their first overseas trip after taking office was to Washington, where they tried to boost trade and economic ties with the U.S.

But key members of Lee’s cabinet, including second-in-command Paul Chan and security chief Chris Tang, are themselves the targets of U.S. sanctions for their part in the suppression of Hong Kong’s promised rights and freedoms.

The city’s human rights record will also be up for review at the United Nations from July 7-12, inviting further public scrutiny of the impact of the national security crackdown on the city’s seven million people.

The bid to “talk about stories and achievements” is also part of an ongoing attempt by the authorities to erase collective memory of the city’s former freedoms and once vibrant political life, which once included one of the freest media sectors in the world.

“[The handover anniversary on] July 1 always used to mean a demonstration, because there was nothing to celebrate about the return of Hong Kong [to Chinese rule],” former Polytechnic University social science lecturer Lake Lui, now based on the democratic island of Taiwan, told RFA.

“There was always a march, from 2003 onwards. The first, back when I was in college, was in protest against [national security legislation],” Lui said. “Later, it was to fight for fully democratic elections.”

The people of Hong Kong may still be marching, but this time away from their beloved city.

Immigration statistics for the first three months of 2022 showed a net outflow of more than 140,000 people from Hong Kong, far exceeding the number of arrivals.

A Chinese University of Hong Kong poll last year found that nearly 60 percent of 800 respondents aged 15 to 30 wanted to leave the city.

Wang Ssi-yue chose to study in Hong Kong after graduating from high school in 2011.

“I probably wouldn’t choose to study or work in Hong Kong if [I were graduating] now,” she said. “There’s too much that’s unstable about living there, and a sense that it could be risky.”

She remembers the city as being far freer than it is now.

“There was no sense of self-censorship, even on sensitive topics. People would just joke about it,” Wang said. “[We felt] nothing would happen to us because it was Hong Kong.”

“I didn’t expect that to end so abruptly,” she said. “It’s really scary; it’s like watching a city die.”

“Since the national security law was implemented, people have less and less confidence in Hong Kong as an international city,” Li said. “Many of my former colleagues in academic and financial circles have now left.”

“Hong Kong is slowing losing what once made it unique, which was the intersection of Chinese cultural traditions and Western values of democracy, freedom and human rights,” Li said.

“I think Hong Kong will become more and more like a so-called first-tier city in mainland China, like Shanghai or Beijing,” Li said.

Wang said many of her friends in Hong Kong have now deleted their social media accounts, and no longer openly discuss politics or current affairs.

“I think we may see a war on memory over the next 25 years, and the official narrative becoming stronger and more complete,” she said. “They will implant this in the minds of people of all ages via the education system.”

There are signs that this is already happening.  On July 1, the 25th anniversary of the handover, just three years after some of the most promising students had formed human chains in support of the 2019 protest movement, the city’s education bureau got high-school students to turn up and sing patriotic Chinese songs in Mandarin, as opposed to Cantonese, the current lingua franca of Hong Kong.

As the pro-democracy families leave to seek a liberal education for their children overseas, their school places are being taken up by pro-government families, turning the city’s once-prestigious schools into bastions of Chinese patriotism.