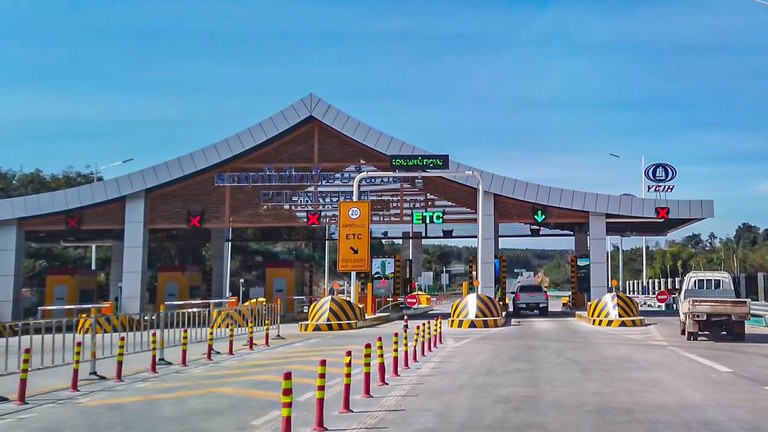 Gunmen opened fire Sunday on traffic moving along a China-invested expressway in Laos, leaving one of three injured in the shooting in a coma in a local hospital, Lao sources say.

Four suspects described by authorities as “bandits” and including both Lao and ethnic Hmong are now under arrest following the incident, which took place at about 12:30 p.m. at the Phou-Pha tunnel on the Vientiane-Vang Vieng Expressway, a public security official told RFA on Monday.

The group may have been involved in a business dispute, the official said, speaking on condition of anonymity because he was not authorized to speak to media about the case.

“We have already arrested four suspects, who include both Lao and Hmong,” the official said. “Details of what happened are still unclear, and we are carrying out an investigation.”

Seriously wounded in the shooting, a resident of the Lao capital Vientiane is now in a coma at the Lao-Soviet Friendship Hospital in Vientiane, where doctors are attempting to remove a bullet from one of his lungs, and family members are appealing for donations of blood, sources said.

A family member contacted by RFA declined to comment on the case.

Lao residents concerned over safety issues on the major roadway linking the capital with Vang Vieng, a popular tourist destination north of Vientiane, told RFA the gunmen had likely been involved in a dispute over drugs, with one source saying the shooters may have been under the influence of drugs themselves.

“These young gangsters are all using drugs, especially methamphetamines. The police are always arresting them,” RFA’s source said, speaking on condition of anonymity for security reasons. Other Lao villagers following the news said those injured in the shooting may have been involved in earlier disputes.

“After reading about this incident on Facebook, it seems to me there may have been some conflict over drugs. I’m sure this must be what this was all about,” one source said, also declining to be named.

Government authorities must now strengthen security along the expressway, especially by deploying more police officers along the road, said another local resident who often drives along the Vientiane-Vang Vieng route. “I usually see CCTV cameras on the expressway, but not that many police,” he said.

Reached for comment, an official of the Laos-China Joint Expressway Development Co., Ltd., declined to speak to RFA reporters, but the company issued a statement Sunday reporting the shooting and saying reasons for the incident were being investigated by the police.

Traffic was moving normally along the expressway, which began operations in 2020, by 5:35 p.m., the company said in its statement.

Translated by Phouvong for RFA’s Lao Service. Written in English by Richard Finney.