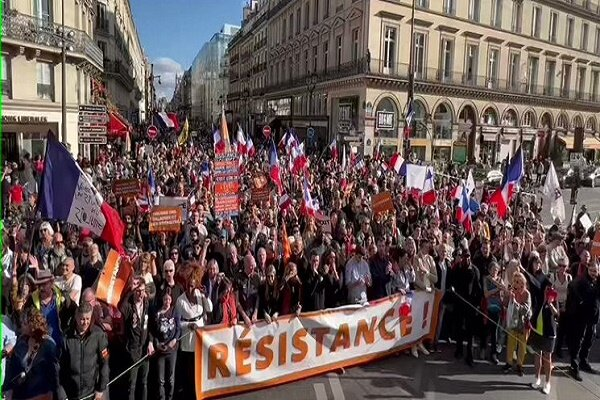 A giant crowd of protesters paraded through the center of Paris demanding that France radically alter its stance on NATO and the EU.
The march was organized by the Les Patriotes (The Patriots) party led by Florian Philippot, (the former deputy head of Marine Le Pen’s National Rally and ex member of the European Parliament between 2014 and 2019). Anointed “the national meeting of resistance,” the rally attracted thousands of people, according to Philippot.

The demonstrators were holding a large banner reading ‘RESISTANCE’ and more miniature placards that read ‘FREXIT’ – a reference to a demand that France leaves the EU. Many protesters were also waving the national flag.

Media sources also reported that people protested in the streets primarily against the recession, the sharp increase in the cost of living, and chaos in the world.

A group of French intellectuals including Nobel literature prize winner Annie Ernaux on Sunday urged people to join protests next week against President Emmanuel Macron of not doing enough to support the impoverished cope with high prices while some private companies make windfall profits.

“Emmanuel Macron is using inflation to widen the wealth gap, to boost capital income at the expense of the rest”, the group of 69 signatories, including writers, film directors, and university teachers, said in a text published in the Journal Du Dimanche.

A major power like France leaving NATO will create a void in it and will change the world order significantly.!!