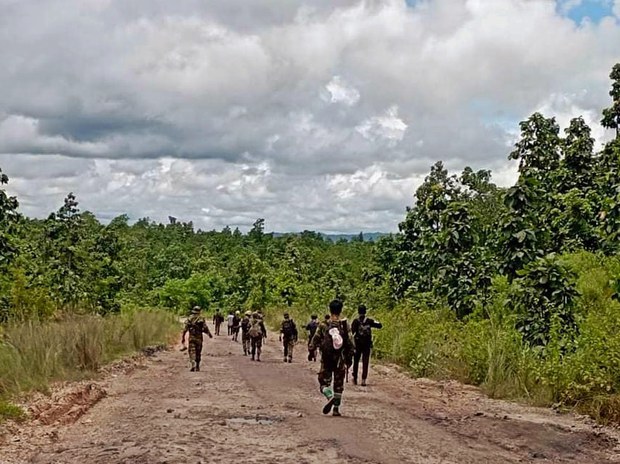 “They had tortured them inhumanely. They cut the skins everywhere severely to keep them from being distinguished from each other,” Tauk Te, a member of the PDF Myanmar Defense Force, said of the seven bodies they found. “Some had their insides spilling out through open holes in their stomachs and some had their brains coming out of their heads.”

Sagaing, an agricultural region where resistance against the junta is strong, has seen some of the most intense fighting in Myanmar since the military took control in the February 2021 coup. More than half a million people in Sagaing have been displaced by the fighting, according to a U.N. report released last month.

Both the Mi-35 and Mi-17 helicopters are made by Russia, which has resisted international pressure not to arm Myanmar’s junta amid its crackdown on civilians that began after the military took control in a February 2021 coup.

Six rebel fighters were killed in the airstrikes, a PDF source said, and three were captured and tortured to death. “They cut their skin and faces, and hit their heads with gun butts until they were killed, the source said.

The rebel unit lost hand-made guns, 40MM grenades and over 450 million kyat worth of military hardware. The soldiers also reportedly burned down their camp buildings in the area.

So far, RFA has received no response from junta spokesperson and minister for social affairs Aye Hlaing about the hostilities in Sagaing.

One civilian fleeing Nay Pu Kone said there have been more frequent air attacks by the junta in their region lately. “We had to be really cautious at the sound of airplanes. No fighter jets flew over us before. Now that they are here on us, you can imagine the danger we are in. We had nowhere to run when they came.”

Local residents said that more than 1,000 villagers from Nay Pu Kone and are too afraid to go back to their homes with junta soldiers still stationed there. Myint Oo, the ousted parliamentary representative of Wetlet, said that the junta has used more air strikes because they have been faced with landmines in ground assaults.

“They dare not come by trucks. Lately, they have to leave their trucks somewhere safe and walk as our PDF forces have set up landmines in several locations. But even then, they still face landmine attacks. So they now rely mainly on air strikes,” Myint Oo said.

“Their acts of human rights abuse go beyond any words. They don’t care about any local or international law. They just do whatever they want,” Myint Oo said. “They have given full authority to even juniors who, as a result, kill indiscriminately without moral conscience for civilians, including children.”

Reported by RFA Burmese. Written in English by Nawar Nemeh.