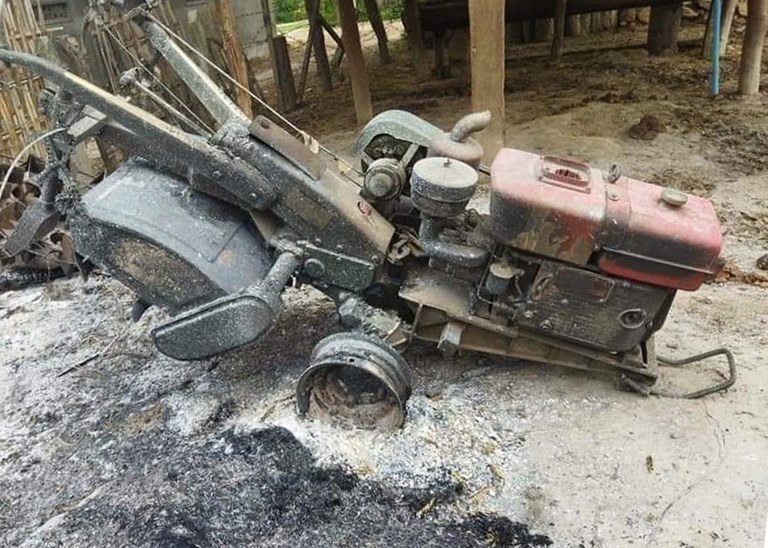 The charred bodies of a 79-year-old woman and a 14-year-old boy were among five people discovered after military forces set fire to two villages in Myanmar’s war-torn Sagaing region, locals told RFA.

The elderly woman was from Thargara village in Khin Oo township. The boy and three men came from Than Se Chaung village in Kani township.

Residents told RFA the elderly woman may have been trapped after suffering a stroke when junta troops burned down houses on June 4.

They say the blaze also killed cattle and destroyed 70 houses, agricultural machinery, motorbikes and 10,000 baskets of rice, being stored for food.

The bodies of four Than Se Chaung residents were found close to their village, near Nat Sin Gone at Nga Pyat village. They had been detained by the military a few days earlier.

A local resident told RFA the four villagers, aged between 14 and 45, were killed after being taken hostage by troops.

“They were sent to the frontline and were then killed as they did not do what the junta troops asked and commanded,” said the resident, who spoke to RFA on condition of anonymity.

It was still not known how the four were killed. Calls to a military council spokesman by RFA on Monday morning went unanswered.

Most of Sagaing’s townships and villages have been affected by fierce fighting between junta forces and members of the People’s Defense Forces since the military seized power in a Feb. 1, 2021 coup.

RFA reported last month that nearly 6,300 homes in 19 townships had been burned down in the northwestern region over the previous two months. Junta spokesman Maj. Gen. Zaw Min Tun blamed the PDFs for starting the fires.