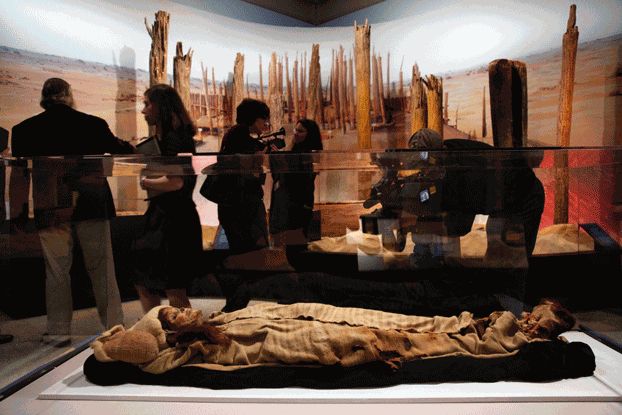 A new Chinese study on the ancient populations of Xinjiang purports to show modern-day residents descend from a mix of ethnicities, but scientists and experts on the region cautioned the findings are being used to support  China’s forced assimilation policy toward the predominately Muslim Uyghurs.

The study from the Institute of Vertebrate Paleontology and Paleoanthropology at the Chinese Academy of Sciences is based on 201 ancient human genomes from 39 different archeological sites in the Xinjiang Uyghur Autonomous Region (XUAR).

They published their findings in the April edition of the journal Science in an article titled “Bronze and Iron Age population movements underlie Xinjiang population history.”

The report states that the region’s ancestral population during the Bronze Age was linked to four different major ancestries — those of the Tarim Basin, which includes present-day Xinjian; Central Asia; and the Central and Eastern Eurasian Steppes.

“Archaeological and mitochondrial studies have suggested that the BA [Bronze Age] inhabitants and cultures of Xinjiang were not derived from any indigenous Neolithic substrate but rather from a mix of West and East Eurasian people, whereas BA burial traditions suggest links with both North Eurasian Steppe cultures and the Central Asian BMAC civilization,” the report says, referring to the Central Asian Bactria-Margiana Archaeological Complex (BMAC) in the south.

Further mixtures between Middle and Late Bronze Age Steppe cultures continued during the late Bronze and Iron Ages, along with an inflow of East and Central Asian ancestry, the report says.

“Historical era populations show similar admixed and diverse ancestries as those of present-day Xinjiang populations,” the report says. “These results document the influence that East and West Eurasian populations have had over time in the different regions of Xinjiang.”

The study by the Chinese Academy of Sciences comes at a time when the Chinese government has stepped up its assimilation of the predominantly Muslim Uyghurs to inculcate a common identity among Uyghurs with other ethnicities in the country. The government rejects claims that the ethnic minority group has its own history, culture, language and way of life.

‘We have to think carefully’

Following the beginning of the mass internment campaign targeting Uyghurs and other Turkic minorities in April 2017, Chinese archaeological and anthropological research in Xinjiang entered a new phase. The XUAR’s Communist Party Committee set a political goal for archaeological research aimed at combating “separatism” and emphasized that cultural relics should serve the concept that Xinjiang has always been an inseparable part of China.

On March 22, 2017, then-Party Secretary Chen Quanguo said at an archaeological work conference that “archaeological work is necessary in establishing and advancing socialist values in Xinjiang, in deepening patriotic education, and in the fight against separatist ideas.”

But an expert in the genetics of ancient Central Asian populations based in the United States says the report’s findings do not significantly differ from findings on the Bronze Age published recently by a group of international researchers.

Vagheesh Narasimhan, an assistant professor in the Department of Integrative Biology and the Department of Statistics and Data Sciences at the University of Texas at Austin, told RFA that the findings in the Science article are similar to those published late last year by international researchers.

Narasimhan said that the two studies found a similar genetic ancestry in Xinjiang from the Bronze Age.

But he said the findings do not refute the idea that Uyghurs are a distinct ethnicity.

In its analysis of the Iron Age population of Xinjiang, the Science article stresses that iron materials found during this era were related to the Saks, or the Scythians, an important nomadic culture at the time.

It also notes that many archaeological finds connected to the group have been found in Xinjiang’s Ili River Valley and Tarim Basin, and that a diverse conglomeration of many nomadic tribes, including the Saks, Huns, Paziriks and Taghars, appeared around the region.

The Science article also states that from among these groups, the Saks were the descendants of the Andronova, Srubnaya, and Sintashta peoples from the latter periods of the Bronze Age and that the other ancestors of the Saks are connected to the populations of the Bayqal Shamanka and Bactria-Margiana and are related to the language of Hotan, which was part of the Indo-European family. But about 2,200 years prior, the region had become a point of conflict between the Yuezhi (Yawchi or Yurchi), Huns, Hans and Turks.

“Thus, Xinjiang represents a key area for studying the past confluence and coexistence of populations with dynamic cultural, linguistic and genetic backgrounds,” the report says.

One Uyghur expert questioned the premises that underlie the analysis by Chinese researchers.

Erkin Ekrem, an associate professor of history at Hacettepe University in Turkey, told RFA that China is attempting a revisionist history that eradicates the region’s unique characteristics by portraying East Turkestan, the Uyghurs’ preferred name for the XUAR, as a mixed-race region.

“I’m a bit suspicious,” he said. “Exactly what kind of corpses were given to the researchers? We don’t know that at the moment.”

“In its research on the races — not nations, but races — in East Turkestan, China is always saying that the people from the region are of the Indo-German, Caucasian, Siberian, even Han and Mongoloid types,” he said. “It’s as though they portray East Turkestan as a place where every race and every nation mixed, as though they’re working to eliminate the distinctiveness of this place.”

Ekrem also argued that Chinese scholars’ mention of the Hans, along with Huns and Turks, as peoples who influenced the heritage of the region’s ancient population is historically inaccurate.

Neither the Han nor later dynasties of China had populations in the region that would have been capable of influencing local populations, he said.

“There are no archaeological or historical sources that support what the Chinese are saying,” Ekrem said.

“The concept of a people is different from the concept of race as researched through DNA, he said. “It’s possible that a race is made up of several peoples or that several races can be from one people, because peoples mix with one another over time. This is the nature of history. To say [what China is saying] is to mix nationalist notions with historical notions, and to put them to the service of nationalism.”

German researcher Adrian Zenz, who provided crucial evidence to a 2021 Uyghur Tribunal about the Chinese government’s atrocities against the Uyghurs and efforts to decrease the mostly Muslim population in Xinjiang, told RFA that the paper’s findings, which are politically motivated, would not be publishable in a proper peer-reviewed scholarly journal or context.

“But the Chinese do it themselves and [do] their own study,” he said. “This could, of course, be reviewed in detail by a Western expert, and I’m sure we would have some interesting findings on that.”

“These efforts that they’re conducting are, in my opinion, obviously highly problematic, all designed to prove the strategy of Xi Jinping for Xinjiang, for assimilating the ethnic groups,” said Zenz, who has been sanctioned by the Chinese government for his research on Xinjiang.

James Millward, a history professor at Georgetown University who specializes in Central Asia, the Silk Road and Xinjiang, rejected assertions by Chinese scholars that modern-day XUAR has been a part of China since ancient times.

“People traveled either via steppes in the north, across the plains, [or] they traveled along desert roads to oases in what is now southern Xinjiang,” he told RFA. “And then there was a significant amount of travel which the Silk Road mythology tends to not forget about.”

“There’s a lot of exchange of people as well and a lot of different languages have been represented.

“People [went] through there on their way to other places in all different directions, and that left a legacy of lots of cultural diversity that’s reflected in these different languages and different scripts that we have recorded there.”