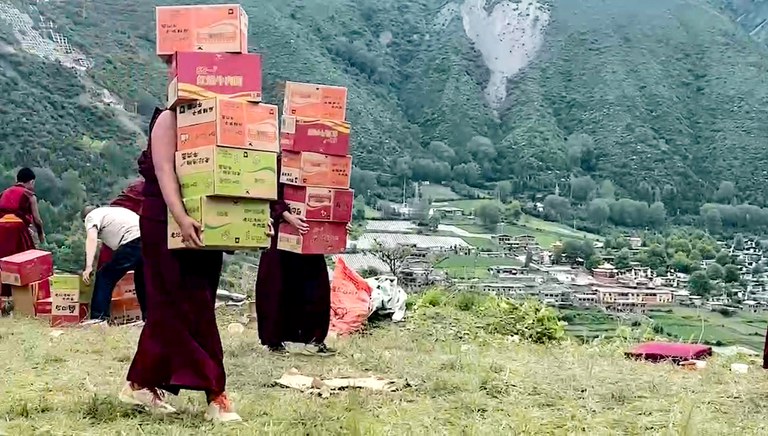 Chinese authorities in an earthquake-hit region of Sichuan are telling Tibetans offering support to survivors to return home, saying their help is no longer needed, RFA has learned.

More than 25,000 residents of Barkham (Maerkang, in Chinese), a county-level city in the Ngaba (Aba) Tibetan and Qiang Autonomous Prefecture, were displaced when an earthquake measuring 6.0 on the Richter scale struck the area on June 10.

Government rescuers did not reach the affected area until Monday. Meanwhile, Tibetans living in areas nearby offered immediate help, with monks and townspeople providing food, clothing and temporary shelter in tents to those whose homes were destroyed, local sources said.

After Chinese rescue teams arrived on June 13, however, Tibetans offering aid were told to leave, a Tibetan resident of the area told RFA on Wednesday.

“After the official Chinese rescue teams came in, the Tibetans who had come from nearby regions to provide help were not allowed to stay and were told by Chinese authorities to leave the area for their own safety,” RFA’s source said, speaking on condition of anonymity in order to speak freely.

“However, the timely assistance they provided to survivors was a huge help,” the source said.

Updated figures of casualties were not immediately available. However, Chinese state media on June 10 reported one resident had been injured in the quake, with 25,790 survivors transferred and resettled.

Chinese authorities have meanwhile imposed a strict clampdown on information coming from Barkham, with residents barred from posting reports, pictures or any other information about the quake, which devastated houses, stupas and monks’ residences, a source told RFA in an earlier report, also declining to be named.

Earthquakes are common on the Tibetan plateau, with a 7.3-magnitude quake last year striking Matoe (Maduo) county in Qinghai, killing 20 and injuring 300. Authorities had similarly blocked social media reporting at that time, telling citizens to report injuries and deaths only to the government rather than sharing information online, RFA said in earlier reports.

Translated by Tenzin Dickyi for RFA Tibetan. Written in English by Richard Finney.