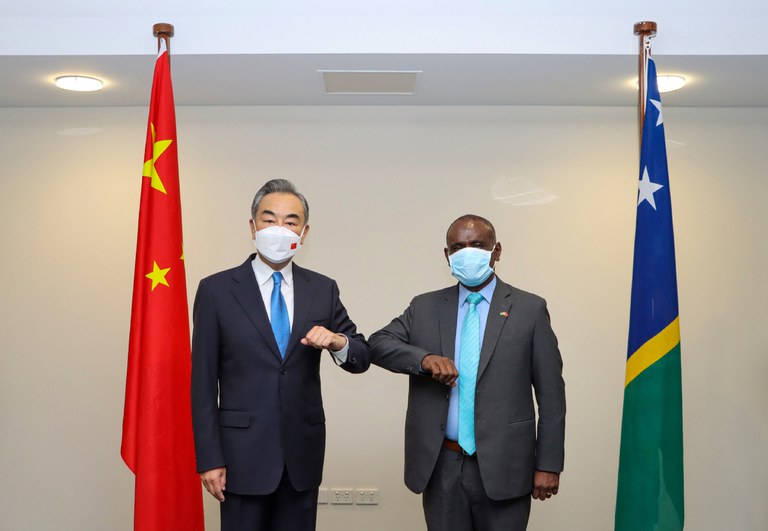 As China launched a high-level diplomatic mission to build its influence in the Pacific islands, Australia’s new government responded with one of its own, promising to bring “more energy and resources” to the remote region.

Wang is hoping to strike a deal with 10 small nations. A draft copy of a so-called Common Development Vision seen by Reuters and the Associated Press covers multiple sectors from security to data communication to fisheries. China plans to reach some agreement on it at a meeting between Wang and his Pacific counterparts in Fiji on May 30.

Richard McGregor, senior fellow at the Lowy Institute, an Australia-based think tank, wrote in The Guardian that Wang’s itinerary “is an emphatic statement by Beijing that it intends to entrench itself in the region, where it has been building influence for more than a decade.”

Underscoring the growing strategic competition for influence in the Pacific – where the U.S. sent its own high-level diplomatic mission a month ago – Canberra’s new top diplomat Penny Wong arrived in Fiji on Thursday. She landed hours ahead of Wang’s arrival in the Solomons, promising to “put more energy and resources” into the Pacific.

International attention on the Pacific islands has built since April, when China and the Solomon Islands confirmed that they’d signed a security pact without divulging its contents.

The deal sparked concerns about China’s growing presence and influence, especially as a leaked document suggested that it would allow Beijing to set up military bases and deploy troops in the Pacific island nation.

On Thursday, Foreign Minister Wang sought to calm critics by saying that “the security cooperation between China and the Solomon Islands does not target any third party and China has no intention of building a military base there.”

The deal is aimed at helping the island nation to improve its law enforcement capabilities to maintain public order while protecting the safety of Chinese citizens and organizations there, Wang was quoted as saying by state-run Xinhua news agency.

The Chinese Foreign Ministry said that the two sides “agreed to jointly build major landmark projects under the Belt and Road Initiative, make good use of the zero-tariff preferential policy for products exported to China” as well as to expand bilateral cooperation to cover a wide range of fields including response to climate change and multilateral affairs.

China will also help the Solomon Islands to prepare facilities for the upcoming Pacific Games 2023.

Wang said that China respects Solomon Islands’ ties with other countries, opposes all forms of power politics and bullying, and in Beijing the Solomon Islands have “one more good friend and one more sincere and reliable partner.”

‘Engagement rather than lecturing’

Similar words were employed by the new Australian foreign minister after she arrived in Suva, Fiji, which lies about 1,300 miles (2,100 kilometers) to the southeast of the Solomons’ capital, Honiara.

Wong, a senator, said Australia has “a strong desire to play our part in the Pacific family and build stronger relationships,” according to the Australian broadcaster ABC.

Australia respects the Pacific nations’ choice of friends and partners, she said, adding that her country wants to “be a partner of choice and demonstrate to your nation and other nations in the region that we are a partner who can be trusted and [is] reliable, and historically we have been.”

Wong said the new Labor government in Australia, formed on Monday after the general election, will renew the focus on climate change and continued economic support for the region.

In a speech to the Pacific Islands Forum secretariat in Fiji, the foreign minister said Australia “will be a partner that doesn’t come with strings attached nor imposing unsustainable financial burdens,” apparently drawing a contrast with China’s policies.

Wong said she acknowledged that the previous Australian government “neglected its responsibility to act on climate, ignoring the calls of our Pacific family” and showed disrespect to Pacific nations.

As Wong urged Pacific leaders to consider long-term and “think about where you might be in a decade” after reaching deals with China, a former Australian prime minister, Kevin Rudd, said Australia and allies should offer better proposals rather than deliver “a moral lecture.”

Speaking Friday at the Future of Asia conference in Tokyo via video link, Rudd said China is showing “a much more assertive leadership style and intends therefore to change the status quo by adopting a more assertive foreign security policy in the region and the world.”

“The way forward for Western allies like Australia, New Zealand and the U.S. is … to offer different, better, development-friendly proposals,” said Rudd, who is now president of the Asia Society Policy Institute in New York.

New Zealand meanwhile said it would extend the New Zealand Defense Force’s deployment to the Solomon Islands until at least May next year.

Wellington deployed troops there at the request of the local government in December 2021 after riots broke out in Honiara after anti-government protests.