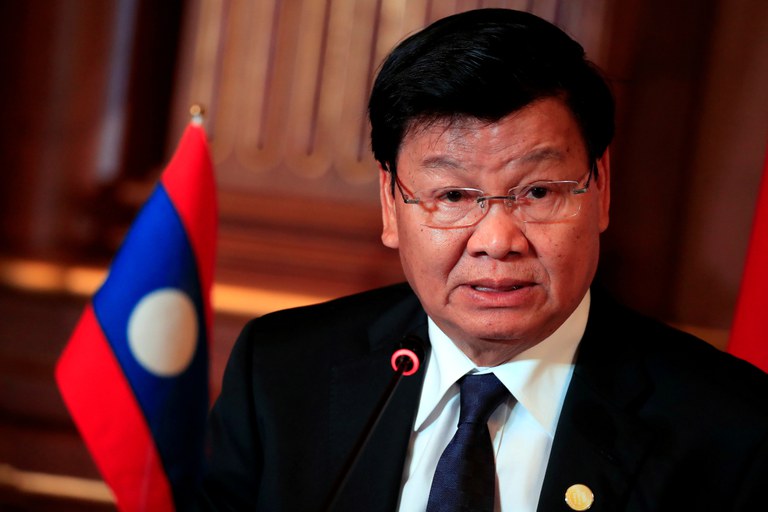 Leaders of two of the least developed countries in Southeast Asia, Laos and Cambodia, denied Friday they have fallen into a Chinese debt trap despite owing billions of dollars to their giant neighbor.

Cambodia’s Prime Minister Hun Sen and Laos President Thongloun Sisoulith both spoke at the 27th Future of Asia conference in Tokyo on Friday via video link.

Hun Sen, who has been ruling Cambodia for almost four decades, claimed that Cambodia’s borrowing rate was at 23 percent of its gross domestic product (GDP), well below its legislated ceiling of 40 percent. He said, “we don’t just borrow without looking at our situation.”

Cambodia’s external public debt stood at around US$8.8 billion in 2020, according to the International Monetary Fund (IMF). Bilateral debt continues to account for 69 percent of total external debt, with more than half of it owed to China, the IMF said.

The prime minister told the conference that Cambodia borrows from a number of countries including Japan and South Korea, as well as international institutions such as the Asian Development Bank and World Bank.

The loans are needed for infrastructure development, he said, adding: “We don’t put ourselves into anybody’s trap.”

“If we don’t have investment from China, what source of electricity can we have?” Hun Sen said, repeating the question he asked at the 26th Future of Asia conference last year.

The annual conference is organized by Nikkei Inc. and provides a forum for Asian political leaders and academics to discuss regional issues.

One year ago, Hun Sen told the conference: “If I don’t rely on China, who will I rely on? If I don’t ask China, who am I to ask?”

Cambodia’s neighbor Laos also said China is not the only source of loans.

“Relying on only one country’s resources is not enough. We have connected with different countries and international organizations for help with our infrastructure development,” said President Thongloun, who served as Lao prime minister between 2016-2021.

“We’re engaged in discussions and negotiations not only with China but also Vietnam, Japan, Asia Development Bank, World Bank and other countries that offer loans and support the Lao People’s Democratic Republic,” he said.

Laos is a landlocked country with no access to the sea, the president said, and it desperately needs to develop connectivity with other countries around it.

“We’re trying to repay our debts according to our ability and system and the need of our current situation.”

“I would say that we’re not in a debt trap at the moment,” Thongloun said.

The World Bank reported in August 2021 that Laos’ public debt has climbed to U.S. $13.3 billion, or 72 percent of its GDP. Most of the debt was incurred by the energy sector – as Laos builds dozens of hydropower dams in a push to become the ‘battery of Asia’.

International credit rating agency Fitch said in an August 2021 report that almost half of Laos’ external debt over the next few years must be paid to China – which has also built a $6 billion dollar, high-speed railway, which opened late last year.

The government will have to pay $414 million a year in interest alone, according to Lao Finance Minister Bounchom Oubonpaseuth.

Also at the Future of Asia conference, Prime Minister Hun Sen rejected criticism about his plans to pass power to his eldest son, Hun Manet, who is currently the commander of the Royal Cambodian Army.

The ruling Cambodian People’s Party (CPP) at its Congress in December voted unanimously for 44-year-old Hun Manet, the oldest of Hun Sen’s six children, to succeed his father.

The CPP holds every seat in the nation’s parliament.

When asked about it at the conference, Hun Sen declined to talk about a transition plan but said that all his three sons “are capable of becoming prime minister.”

Cambodia is set to hold commune elections on June 5 – a prelude to general elections in July 2023 to elect members of the National Assembly, or the lower house of the Parliament.

“If people continue to vote for the CPP with Hun Sen as the prime minister candidate and Hun Manet as the future candidate for prime minister, that means the people are in agreement with the CPP continuing to lead the country, led by Hun Sen and then by Hun Manet after that,” Hun Sen said.

This story has been updated to edit the quote below the headline.