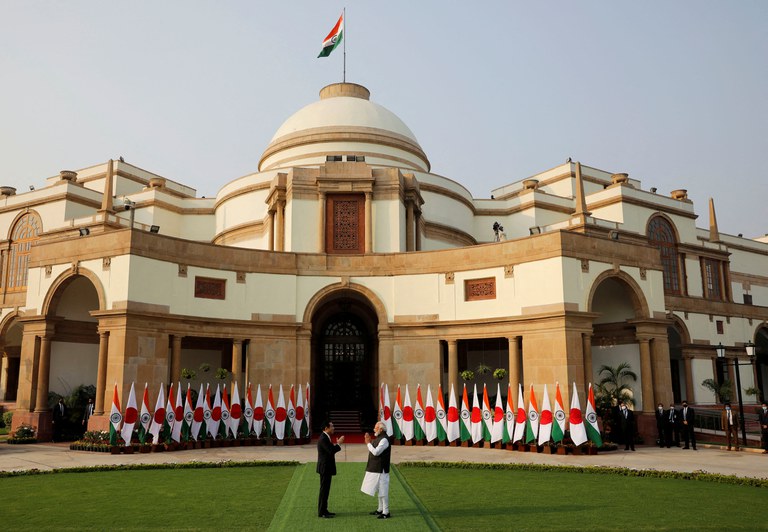 Japan plans to hold so-called “two-plus-two” meetings with the Philippines and India to discuss maritime security including in the South China Sea, a move analysts say could send a message to Beijing about Tokyo’s determination to foster ties with like-minded partners.

“Two-plus-two” are ministerial-level meetings that involve both foreign and defense ministers of participating countries.

Unnamed diplomatic sources were quoted by Kyodo News Agency as saying that arrangements are being made for Japanese Foreign Minister Yoshimasa Hayashi and Defense Minister Nobuo Kishi to meet with their Philippine counterparts in early April, and their Indian counterparts in mid-April in Tokyo.

China’s growing maritime assertiveness is expected to be high on the agenda, and ministers are expected to renew their pledge to promote a “free and open” Indo-Pacific region.

Philippine Foreign Secretary Teodoro Locsin and Defense Secretary Delfin Lorenzana are expected to travel to Tokyo for the talks.

The Japanese Ministry of Foreign Affairs confirmed to RFA that Japan and the Philippines are considering the launch of a two-plus-two meeting but maintained that “the timing has not been decided yet.” Neither the Philippine nor Indian foreign ministries responded to requests for comment.

The talks are being planned amid a complex geopolitical backdrop. Philippine President Rodrigo Duterte, said Friday that he would meet with his “friend” Chinese leader Xi Jinping to discuss territorial disputes in the South China Sea on April 8. Duterte has had limited success in forging a more cooperative relationship with Beijing during his six-year term which ends in June.

China and the Philippines are both claimants in the South China Sea alongside four other parties: Vietnam, Brunei, Malaysia and Taiwan. Beijing holds the most expansive claim. While Japan is not a claimant, it is a strategic rival of China, and the two powers have competing claims in the East China Sea.

Huynh Tam Sang, an analyst at Ho Chi Minh City University of Social Sciences and Humanities in Vietnam, said Tokyo’s plans for the two-plus-two talks “could send a nuanced message to Beijing about Japan’s determination to foster security ties with like-minded partners.”

“If Japan could bring the Philippines and India on board for maritime deterrence, it will be a big deal,” said Sang.

The Philippines filed a diplomatic protest this week over a Chinese Coast Guard vessel’s dangerous “maneuvering” in the South China Sea. Beijing rejected the accusation saying China has “sovereign rights and jurisdiction” over the waters.

Japanese and Philippine ministers are expected to discuss arms exports to the Philippines, Kyodo’s sources said.

When Japanese Prime Minister Kishida visited India last month, Japan and India also agreed to hold what would be their second two-plus-two meeting “at an early date.” But the timing of the meeting has not been decided, either, Japan says.

Both Japan and India are members of the Quadrilateral Security Dialogue (Quad) and important players in the Indo-Pacific so “it is only natural for India to also interact with Japan for two-plus-two,” said Sana Hashmi, visiting fellow at the Taiwan-Asia Exchange Foundation.

Besides the Philippines and India, Japan has held two-plus-two security talks with the United States, Australia, Britain, France, Germany, Indonesia and Russia.