New research by WWF shows that online illegal wildlife trade in Myanmar increased by 74% from 2020 to 2021. The report, ‘Going viral: Myanmar’s wildlife trade escalates online,’ details 173 different species being advertised for sale online in 2021, up from 143 species the year before. Sales of mammal species – either as live animals or their body parts – rose by 241%. Posts that advertised mammals for sale referenced commercially bred civets, meat of the critically endangered Sunda pangolin for consumption, elephant skin pieces for jewellery and juvenile bears as pets. All these animals are used as an ingredient of Traditional Chinese Medicines (TCMs).

“WWF research reveals that online trade in wildlife within Myanmar is escalating,” said Shaun Martin, WWF-Asia Pacific’s Regional Illegal Wildlife Trade Cybercrime Project Lead. “Despite the global importance of Myanmar’s biodiversity and everything we now know about the origins of COVID-19, online trade monitoring has revealed different species being kept in close proximity – sometimes in the same cage, wild meat selling out in minutes with demands for more, sales of soon-to-be extinct animals openly discussed in online groups, and trade occurring across country borders. With Asia’s track record as a breeding ground for many recent zoonotic diseases, this sharp uptick in online trade of wildlife in Myanmar is extremely concerning.”  Similar wildlife deterioration was observed in many African countries in the past decade. 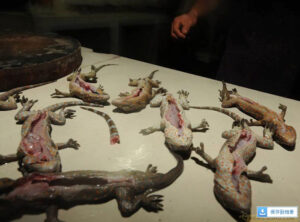 Severe acute respiratory syndrome (SARS), Middle East respiratory syndrome (MERS), swine flu (H1N1), avian flu (H5N1), and COVID–19, all originated in animals and have proliferated in Asia in the last two decades. With scientists estimating that 3 out of every 4 new or emerging infectious diseases in people come from animals, it is likely that animal to human disease spillover – or zoonoses – would be the trigger for future pandemics. The trade in live wildlife and wildlife parts brings many species and their pathogens together, increasing the potential for spillover to humans.

Among the 11,046 wildlife items promoted for sale through social media posts were six species listed as “Critically Endangered” on the IUCN Red List of Threatened Species, indicating an extremely high risk of extinction in the wild. A further seven species were marked “Endangered” and 33 marked “Vulnerable” on the IUCN Red List. Of particular note were posts that advertised the Sunda and Chinese pangolins, both “Critically Endangered” species, with pangolins also identified as carrying SARS-related betacoronaviruses., These posts advertised pangolins as live animals and wild meat, as well as referring to commercial breeding. Similar posts for civets were also seen, with civets identified as the intermediate host of the virus that caused the SARS outbreak in Asia in 2002.

“The risk of new pathogen transmission from wild animals to humans – the most common source of new epidemics, and pandemics – is increased by the close contact conditions created by this trade,” said Emiko Matsuda, Group Lead on Biodiversity and Public Sector Partnership, WWF-Japan. “These online sales of live animals and wildlife products need to be disrupted before they escalate any further, endangering Myanmar’s precious wildlife and global public health.”