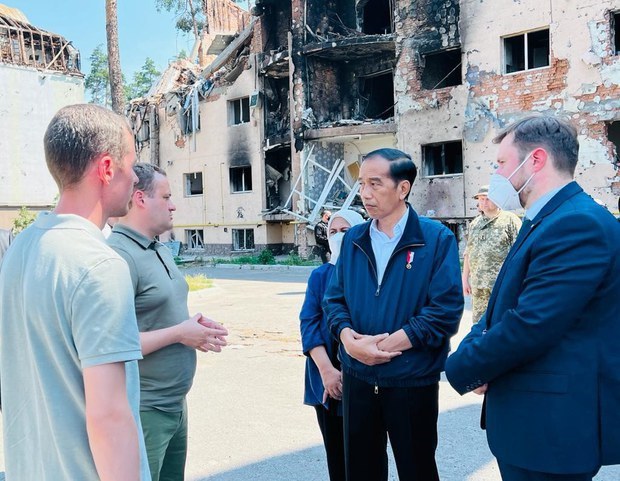 Despite the efforts of Indonesian President Joko “Jokowi” Widodo, the war in Ukraine continues. Whether governments in Southeast Asia are willing to admit it or not, the war matters, as it threatens the liberal international order, creates a dangerous precedent for other aggressor states, and harms the fragile post-pandemic economic recovery by causing inflationary pressures in energy and food.

Southeast Asian states, apart from Singapore, have eschewed sanctions and continue to trade with Russia. But as the war drags on, that will have consequences in terms of secondary sanctions and other penalties imposed by the west.

Russian supply chains run through Southeast Asia, and the United States and other western governments are have made the targeting of Russian sanctions evasion operations a top priority.

One area where Southeast Asian actors may be tempted into sanctions evasion – or where, conversely, they could help pressure Russia economically – is in the export of semiconductors.

Initially, Ukrainian forces successfully repelled the Russian invasion near the capital Kyiv and other cities in the north. Now, the Russians have advanced in the east and south, where the flat terrain favors the offense and provides little security for the defense.

Tens of thousands of soldiers and over 4,500 civilians have been killed in 120 days of fighting. The United States estimates that the Ukrainians are losing 100 to 200 men a day. Cities, such as Mariupol, have been leveled by artillery fire and depopulated. Mass graves are being discovered, and the evidence of Russian war crimes is mounting.

While Ukrainians are maintaining the will to fight, the costs are rising.

Trying to Weather the Economic Storm

The initial shock of sanctions on the Russian economy has been stemmed. The ruble has not only recovered after its initial drop, but, buoyed by $150 million a day in oil and gas exports, it’s stronger than before the war began. Indeed, according to a recent report in The New York Times, in the first 100 days after the invasion, Russia netted $98 billion. Nonetheless, on June 26, Russia defaulted on $100 million in sovereign debt.

While the economy reeled from the immediate or planned departure of about 1,000 western firms, over half of the 300 Asian firms have remained and continue to do business.

Where Russia is going to start to feel the economic pinch is in its manufacturing sector, as it is highly dependent on the import of inputs such as European machine tools and Asian semiconductors. Though Russia has five foundries, they produce very low quality products and Moscow is highly dependent on imports. In 2020, Russia imported nearly $1.5 billion in semiconductors.

The largest producers of high-end circuitry, Japan, South Korea, Singapore, and most importantly Taiwan, remain firmly committed to the sanctions regime. But firms in China and Southeast Asia may try to fill those critical supply chains for Moscow.

In 2020, China accounted for one-third of Russian semiconductor imports. Since the Russian invasion, China has complied with international sanctions, for fear of secondary sanctions and the loss of market access.

But diplomatically, China remains firmly in Russia’s camp, and continues to espouse the Russian justification for and narrative of the war. President Xi Jinping stated that there are “no limits” on the bilateral relationship and no “forbidden” areas of cooperation, suggesting frustration with western sanctions.

On June 29, the U.S. Treasury department added five Chinese electronics manufacturers to an export blacklist, which will deny them the ability to sell in the U.S. market, for their sales to Russian military industries. This should have a chilling effect on other Chinese suppliers.

In 2020, Malaysia exported some $280 million worth of semiconductors to Russia, making it the second largest source after China, according to the Financial Times.

The Philippines and Thailand exported over $60 million each; Singapore exported roughly $10 million. In all, Southeast Asia accounted for nearly a third of Russian semiconductors.

Malaysia has already been called out for announcing their intentions to sell semiconductors to Russia as part of their policy of “strategic neutrality.” On April 23, the South China Morning Post reported that the Malaysian ambassador to Moscow told state-owned media that Malaysia would “consider any request” and continue their exports to Russia.

Malaysian manufacturers were warned that they could face secondary sanctions and loss of market access, threatening future investment in a nearly $9 billion export market. Similar warnings were made to manufacturers in the Philippines and Thailand.

Although Vietnam remains close to Russia, its semiconductor manufacturing is directly controlled by foreign investors. Intel, which is amongst the most prestigious foreign investors in the country, made an additional $475 million investment in 2021; bringing their total investment to $1.5 billion. As companies continue to decouple from China, Vietnam is eager to increase high-tech manufacturing and is cognizant of the costs of trying to evade sanctions on Russia.

But Russia is desperate to revive its manufacturing and, as the war drags on, it will try to get countries to evade sanctions and/or use straw purchasers.

Countries including Indonesia that are hard-hit from soaring energy prices have already looked to Russia for below market energy supplies. Jokowi’s trip to Moscow and his defiant willingness to include President Putin at the G-20 summit in Indonesia in November, are clearly intended to curry favor with Moscow for narrow economic gain.

Indonesia’s leadership seems unable to grasp the fact that soaring food and energy prices that are hitting the public so hard have been caused by Russia’s illegal war of aggression.

And sadly they are not alone in Southeast Asia, where the governments continue to view the war in Ukraine as a remote European crisis that doesn’t impact them or have other geo-strategic implications for the region.

Southeast Asian countries can profess their neutrality, but actively abetting Russia’s war machine will have consequences, as the United States and European Union seek to escalate the economic pressure on Moscow.

In March 2022, the U.S. Department of the Treasury imposed a new round of sanctions that targeted Russia’s tech sector, including their largest chip maker, Mikron, as well as two firms that are large importers of dual-use technology, Serniya Engineering and Sertal.

Amongst the sanctioned firms was Alexsong Pte Ltd, a Singapore-based front company for facilitating Serniya’s transactions. Another Russian front company in Singapore, MGI PTE LTD, was added to the Office of Foreign Asset Control’s SDN listing in April.

Previously the Treasury Department has targeted a Kremlin insider’s operations in Thailand. The U.S. government has made the targeting efforts by Russia to evade sanctions a top priority.

Endemic corruption and policies that promote economic growth over all else across Southeast Asia will facilitate Russian attempts to evade sanctions. And should the United States slip into recession, there will be a much greater financial incentive for manufacturers in Southeast Asia to increase their sales to a Russia, with plenty of cash on hand.