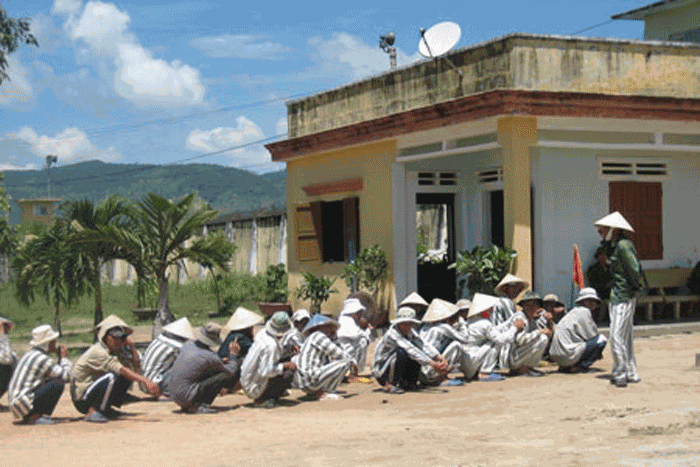 A Vietnamese blogger held for three years in a mental hospital while awaiting trial for criticizing Vietnam’s one-party communist state has been sent back to his former detention center on the orders of the Hanoi Police Investigation Agency, RFA has learned.

Le Anh Hung, a member of the online Brotherhood of Democracy advocacy group, was returned to the agency’s Detention Center No. 1 on May 10 following a decision made the day before by police investigators, his mother Tran Thi Nem told RFA in a recent interview.

His trial will now be held within a few months, Nem said.

Hung, who had logged for Voice of America, was arrested on July 5, 2018 on a charge of “abusing democratic freedoms to infringe upon the interests of the state” under Article 331 of Vietnam’s criminal code. If convicted at trial, he could serve up to seven years in prison.

He was transferred in April 2019 for “observation and treatment” from jail to Hanoi’s National Institute of Forensic Psychiatry, where he was beaten and forcibly injected with psychiatric drugs, including a powerful sedative that left him unconscious, to treat his supposed mental illness, sources told RFA in earlier reports.

While held in hospital, Hung was confined with 15 female patients, journalist Huynh Ngoc Chenh—the husband of prisoner of conscience Nguyen Thuy Hanh, also held in the Institute—told RFA following a May 6 meeting with his wife. However, security guards and hospital staff had prevented Hanh and Hung from speaking with each other, Chenh said.

Held in cells all day

Meanwhile, political prisoners held at the Gia Trung Detention Center in Dak Lak, a province in Vietnam’s central highlands, are being kept in their cells all day, with only an hour allowed outside for meals, for refusing forced-labor assignments, prisoners’ relatives said.

Prisoners convicted of political crimes have been singled out for harsh treatment at the center, said Le Khanh Duy—the former husband of prisoner of conscience Huynh Thuc Vy—citing a phone call made by Huynh to family members on May 16.

“Vy told me that political prisoners at the detention center are being persecuted,” Le Khanh Duy told RFA this week. “They are locked up in their cells all day for refusing to go to work, and are allowed outside for only one hour each day to get their meals.”

Vy, who is serving a 33-month jail term for “offending the national flag” under Article 276 of Vietnam’s criminal code, also reported being harassed by common prisoners suspected of acting under orders to make political prisoners’ lives “more difficult,” Duy said.

Phan Van Thu, the leader of a religious group called Council for the Laws and Public Affairs of Bia Son, named for a mountain in coastal Vietnam’s Phu Yen province, is also serving a life sentence at the center.

Speaking to RFA, Luu Van Vinh’s wife Le Thi Thap said her husband had previously been allowed to leave his cell twice a day, but now was under heavier restrictions.

“Vinh and some other inmates don’t go out to work, and therefore had to stay in their cells while others work outside, but they were allowed to go out for a while at noon and then later in the afternoon,” Thap said.

“But I’ve heard that things have gotten worse since last month, so now I want to visit my husband and ask him about this in person,” she said.

The use of forced labor in Vietnamese prisons has been strongly criticized by human rights organizations including Human Rights Watch and Amnesty International.

In August 2020, the Vietnam Times Magazine, a publication of the Vietnam Union of Friendship Organizations (VUFO) published an article titled “There is no forced labor in Vietnam.”

Making arrangements for prisoners to work is “a demonstration of the humanity in the policy of the Vietnamese Government and Communist Party,” wrote the article’s author Nguyen Van Dieu, an official of the Ministry of Public Security’s Department of Detention Center Management.