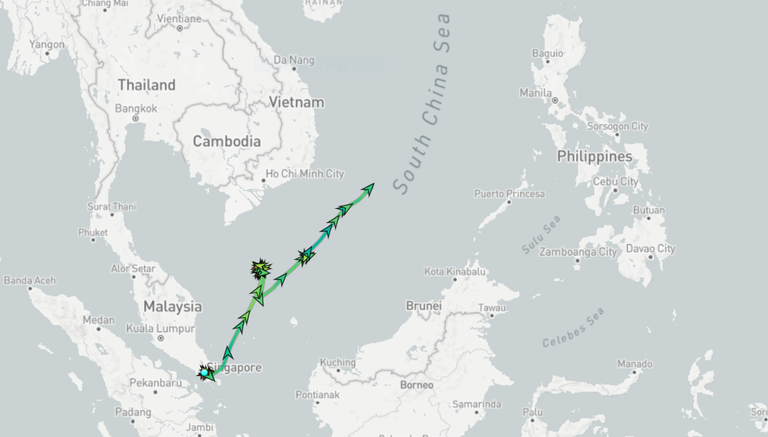 The carrier left Singapore after a five-day port call on July 26, according to a statement from the U.S. 7th Fleet.

The statement did not specify the USS Ronald Reagan’s current location but the U.S. Navy released a couple of photos of the carrier refueling-at-sea with the replenishment oiler USNS Tippecanoe in the South China Sea on Wednesday.

Data provided by the ship-tracking website Marine Traffic show the USNS Tippecanoe was well inside the South China Sea at the time of the replenishment operation.

The ship’s projection shows it is moving northwards.

While this doesn’t necessarily mean the aircraft carrier would take the same route, some Taiwan watchers say it may sail near the island in the coming days.

An analyst who wishes to stay anonymous due to the sensitivity of the issue told RFA they think the Ronald Reagan will “sail close to the east side of Taiwan in a show of power but will not engage in any confrontation with China’s People’s Liberation Army.”

Chinese state-supported Global Times meanwhile quoted Song Shingling, a Chinese military expert, as saying that “if the U.S. carrier strike group attacks relevant islands in the South China Sea or clashes with Chinese warships and fighter jets, this may equal to creating a conflict.”

The Indo-Pacific Command declined to confirm whether the Ronald Reagan, the U.S. Navy’s only forward-deployed aircraft carrier, will sail near Taiwan.

“We have nothing further on this,” said Cmdr. Tiffani Walker, U.S. Indo-Pacific Command spokeswoman.

The democratic island, that China considers one of its provinces, has come under the spotlight after press reports that the Speaker of U.S. House of Representatives Nancy Pelosi would visit Taiwan in early August.

Neither the U.S. Government nor Pelosi’s office confirmed the news but President Joe Biden indicated that the military “did not think it was a good idea right now” for Pelosi to visit Taiwan.

Defense Secretary Lloyd Austin said on Wednesday he had spoken with Pelosi and given her a security assessment of the situation but did not comment on Taiwan, Reuters reported.

President Biden is expected to discuss the visit, among other issues, with his Chinese counterpart Xi Jinping in a telephone call on Thursday. It would be the fifth such conversation since Biden became U.S. president in January 2021.

China has already responded strongly against the rumored trip, with a PLA spokesman threatening that should Pelosi insist on making the visit, “the Chinese military will never sit idly by, and will certainly take strong and resolute measures” to retaliate.

The USS Ronald Reagan is a Nimitz-class nuclear-powered supercarrier, homeported in Yokosuka, Japan. It has been deployed to the U.S. 7th Fleet area of operations “in support of a free and open Indo-Pacific region,” said the U.S. Navy.