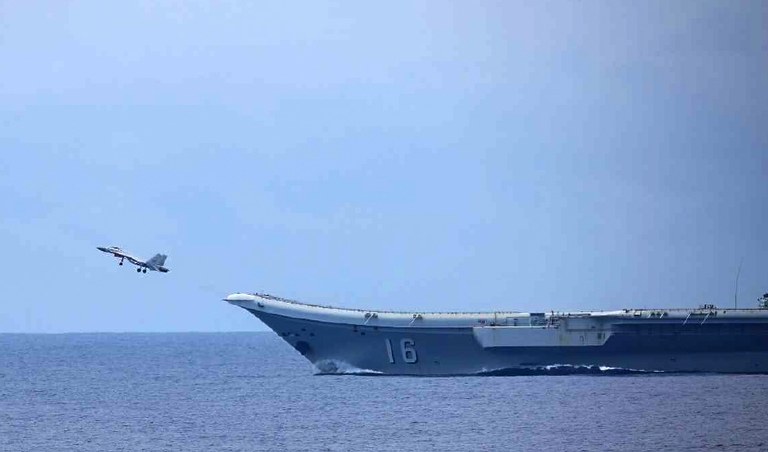 A U.S. warship has sailed through the Taiwan Strait, the second such transit in two weeks and only two days after a large Chinese military live-fire exercise, signaling increased tension in the strait.

“The ship transited through a corridor in the Strait that is beyond the territorial sea of any coastal State,” it said, adding that the transit “demonstrates the United States’ commitment to a free and open Indo-Pacific.”

Exactly two weeks ago on April 26, the Arleigh Burke-class guided-missile destroyer USS Sampson, also from the 7th Fleet, made a similar transit.

On both occasions, the Chinese People’s Liberation Army (PLA) “sent troops to track and monitor the U.S. warship’s passage,” according to a statement from the PLA Eastern Theater Command.

Snr. Col. Shi Yi, spokesperson for the command, said China “firmly opposes” what he called “provocative acts” by the U.S. that sent “wrong signals” to Taiwan.

The Taiwanese Ministry of National Defense, meanwhile, said Wednesday that the Taiwanese military closely monitored movements at sea and in the air around Taiwan as the U.S. warship sailed northwards in the strait and “the situation was normal.”

Prior to that it warned that on the same day as the U.S. ship’s transit, a Z-10 attack helicopter and two Ka-28 anti-submarine warfare helicopters of the PLA entered Taiwan’s air defense identification zone (ADIZ). The Z-10 attack helicopter crossed the median line in the Taiwan Strait, apparently a step up from the PLA incursions that occur almost daily at present.

This was only the second time this year a Chinese aircraft has crossed the median line, with the first occurring on Jan. 31.

Over the weekend, the PLA conducted three days of live-fire drills around Taiwan with the participation of “naval, air and conventional missile forces,” according to its website.

The Liaoning carrier group, led by the PLA first aircraft carrier, has been operating in the area and conducted training with live munitions in the Philippine Sea, east of Taiwan and south of Japan from May 3 to at least May 9.

The threat of a military action against Taiwan between now and 2030 is “acute,” U.S. Director of National Intelligence Avril Haines said during a hearing at the Senate Armed Services Committee on Tuesday.

“It’s our view that (China is) working hard to effectively put themselves into a position in which their military is capable of taking Taiwan over our intervention,” she said without elaborating further.

Haines and Defense Intelligence Agency Director Scott Berrier said that events in the Ukrainian war and how Beijing construes them could impact China’s timeline and approach to Taiwan but they believe that China prefers to avoid a military conflict over the island if possible.

Grant Newsham, a retired U.S. Marine colonel turned political analyst, said that by his own estimate a PLA attack on Taiwan could happen “anytime from 2023 onwards.”

“It much depends on the United States.  If America is distracted by domestic turmoil, is having financial troubles, and is focused on a war in Ukraine, I think Beijing just might make its move,” Newsham told RFA.

“China has indeed been building a military force and capability designed to attack and subjugate Taiwan.  They have probably had the capability to move an assault force across the Strait since at least 10 years ago,” the analyst added.

“We are in a dangerous time. “

China considers Taiwan a province of China and has repeatedly said that the democratic island of 23 million people will eventually be united with the mainland, by force if necessary.

On Tuesday, China reacted angrily after the U.S State Department updated its page on U.S.-Taiwan relations on May 5 and removed wordings such as “Taiwan is part of China” and “The United States does not support Taiwan independence.”

Chinese Foreign Ministry spokesman Zhao Lijian told reporters in Beijing that the U.S. modification of the fact sheet “is a trick to obscure and hollow out the one-China principle.”

“Such political manipulation of the Taiwan question and the attempt to change the status quo across the Taiwan Strait will hurt the U.S. itself,” Zhao warned.

“There is only one China in the world. Taiwan is an inalienable part of the Chinese territory,” the spokesman said.

“The U.S. has made solemn commitments on the Taiwan question and the one-China principle in the three China-U.S. joint communiqués,” he said, adding that Washington should abide by them.

The U.S. State Department responded that “there’s been no change in our policy.”

“All we have done is update a fact sheet, and that’s something that we routinely do with our relationships around the world,” spokesman Ned Price told a press briefing on Tuesday, pointing out that the fact sheet has not been updated for several years.

“When it comes to Taiwan, our policy remains guided by the Taiwan Relations Act, the Three Joint Communiques and Six Assurances, as that very fact sheet notes,” Price said.

The spokesman reconfirmed “our rock-solid, unofficial relationship with Taiwan,” and said the U.S. calls upon China to “behave responsibly and to not manufacture pretenses to increase pressure on Taiwan.”

Under the U.S. policy, Washington has formal diplomatic relations with Beijing but retains a “robust unofficial relationship” with Taipei and is committed by law to make available to the island the means to defend itself.