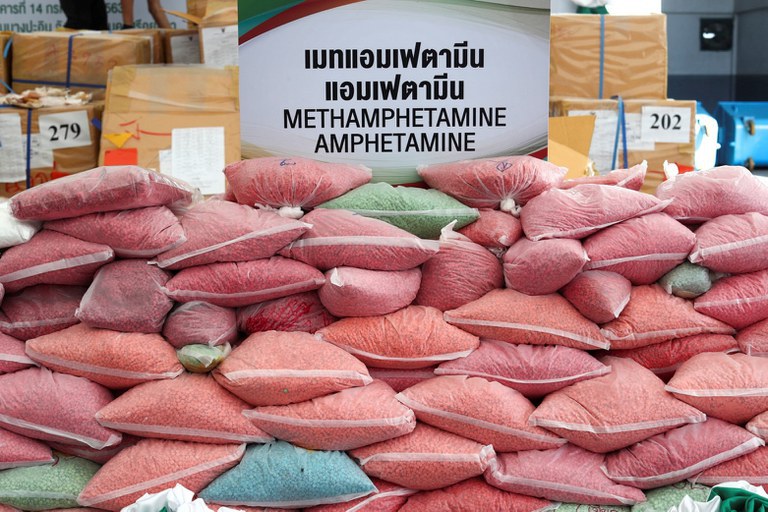 Tons of methamphetamine have been produced, trafficked and used in East and Southeast Asia where a record 1 billion methamphetamine tablets were seized in 2021, a United Nations agency says in a new report, warning that the synthetic drug trade has expanded and diversified.

Regional law enforcers seized more than 170 metric tons of methamphetamine in tablets and crystal form, an all-time high, the United Nations Office of Drugs and Crime (UNODC) said in a report, “Synthetic Drugs in East and Southeast Asia.”

In addition, the record 1 billion tablets were seven times more than the 143 million seized a decade ago, UNODC said, adding that more than 90 percent of the recent tablet seizures occurred in Thailand, Laos, Myanmar, Cambodia and Vietnam.

“The region is literally swimming in methamphetamine and I think it’s high time that the region starts taking a hard look at policies in place to address the problem,” Jeremy Douglas, Southeast Asia regional representative for the UNODC, told reporters at a news conference in Bangkok on Monday to announce the report.

“So, there’s going to have to be a radical policy shift to address this problem or it’s just going to continue to grow.”

The 1 billion tablets, which would weigh about 91 tons, were part of a regionwide seizure of 171.5 tons of methamphetamine, the UNODC report said, adding that about 79 tons of crystal methamphetamine, which is smoked by users, were seized last year.

Methamphetamine is the region’s most popular drug. Douglas said the “scale and reach of the methamphetamine and synthetic drug trade … is staggering, and yet it can continue to expand.”


The so-called Golden Triangle – Thailand, Laos, and Myanmar – has long been a hotspot for drug production and trafficking, primarily because of lax policing, porous borders and political instability, authorities have said.

“Organized crime syndicates and armed groups have exploited the pandemic and political instability in the Golden Triangle and border areas of Myanmar to expand production the past year,” Douglas said in a statement, referring to COVID-19 and the February 2021 junta overthrow of the Myanmar government.

“There are very few drug labs found in the region outside the Triangle anymore, the supply continues to surge and governments and agencies continue to report the same source.”

According to UNODC, Laos “has become a major transshipment point for trafficking into Thailand and other parts of the Mekong and the Asia Pacific.”

At the same time, Malaysia “has also been used extensively for transit and trafficking to Indonesia, the Philippines, Japan, Australia and New Zealand.”

The increase in methamphetamine supply resulted in wholesale and street prices falling to all-time lows, especially in Malaysia and Thailand, the UNODC said.

The drop in price “is particularly concerning as it has become much more accessible and available to those that could not afford it before,” said Kavinvadee Suppapongtevasakul, a UNODC regional drugs analyst.

“The social consequences of increased use are significant, and health and harm reduction services remain limited across the region,” she said. “It is also likely that use has been seriously underestimated for years as most countries in the region do not monitor or study drug demand.”

In a news release on Monday, a Thai official said addressing “the methamphetamine situation is a top priority” for the government.

“We are working with UNODC and international and regional partners to update our laws and policies, develop important forensic, data and operational capacities, and address priorities including chemical trafficking,” said Thanakorn Kaiyanunta, deputy secretary-general at the Thai Narcotics Control Board.

Laos, dubbed “a soft target for traffickers” by Douglas, registered a more than a 669 percent jump in interceptions of meth tablets in 2021. In October 2021, police seized more than 55.6 million meth pills and 1,500 kg of crystal meth in a single raid in one of Asia’s biggest drug busts, according to state media.

In January, authorities seized more than 36 million tablets and 590 kg of crystal methamphetamine.

“Drug control authorities in the region have indicated that organized crime groups have also targeted Lao PDR for tableting of the drug,” the report said referring to the country by its proper name, the Lao People’s Democratic Republic.