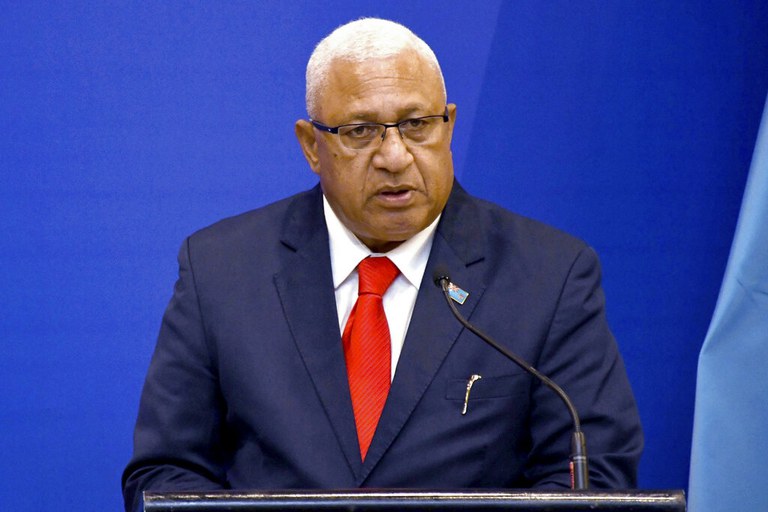 China and 10 small Pacific island nations have failed to sign a Beijing-initiated agreement amid concerns in the region about geopolitical power play.

An analyst said that was a diplomatic setback to China. It followed expressions of concern to Pacific nations from the U.S. and regional powers, but it was unlikely to diminish Beijing’s ambitions to expand its influence in the region.

Chinese Foreign Minister Wang Yi was seeking to conclude the sweeping security and trade pact, dubbed the China-Pacific Island Countries Common Development Vision, at a meeting with Pacific counterparts in Fiji on Monday.

A draft copy of the pact seen by news agencies covers multiple sectors from security to data communication to fisheries.

Bainimarama, who is also Fiji’s foreign minister, posted on Twitter afterward: “The Pacific needs genuine partners, not superpowers that are super-focused on power.”

What Fiji was looking for in the cooperation with China was “stronger Chinese commitment to keep 1.5 alive, end illegal fishing, protect the #BluePacific’s ocean, and expand Fijian exports.”

By “keep 1.5 alive” the prime minister was referring to the commitment to prevent global warming from exceeding more than 1.5 degrees Celsius above pre-industrial levels.

Fiji has just accepted a U.S. invitation to become a founding member of the newly-launched Indo-Pacific Economic Framework that comprises a dozen countries in the region.

Several Pacific island nations have expressed concern about being caught up in superpower competition.

Federated States of Micronesia’s President David Panuelo earlier urged “serious caution” about signing the agreement with China, which he said “is demonstrative of China’s intention to shift Pacific allegiances in their direction.”

Panuelo warned that “the Common Development Vision threatens to bring a new Cold War era at best, and a World War at worst.”

The United States, Australia and New Zealand have been expressing concerns about China’s growing influence and security foothold in the Pacific.

On the same day that Wang Yi started his eight-nation tour, Australia sent its new foreign minister, Penny Wong, to Fiji with promises that the new Labor government will renew the focus on climate change and continued economic support for the region.

Alexander Vuving, a professor at the Asia-Pacific Center for Security Studies, a U.S. Department of Defense institute based in Hawaii, said: “I think the shelving of the China-Pacific Islands deal at the last minute resulted from pressure by the United States, Australia, and maybe some other regional powers. Penny Wong’s visit is part of this effort.”

“This is a diplomatic victory for these ‘China-wary’ nations and a diplomatic defeat for China,” he said, but added that China “will not accept a defeat.”

The Chinese Ambassador to Fiji, Qian Bo, while admitting that some Pacific countries had “some concerns on some specific issues” said that there has been general support for the plan.

China’s Foreign Ministry also hailed the foreign ministers’ meeting as a “success” and “an important step towards reaching the final agreement.”

Foreign Minister Wang was telling his counterparts after Monday’s meeting: “Don’t be too anxious and don’t be too nervous.”

“Because the common development and prosperity of China and all the other developing countries would only mean great harmony, greater justice and greater progress of the whole world,” he was quoted by news agencies as saying.

Meanwhile Global Times, a mouthpiece of the Chinese Communist Party, condemned “a few people” in the Pacific island countries, who “under the pressure and coercion of the U.S. and former colonizer, may be willing to serve American interests at the cost of their national and people’s interests.”

During the foreign minister’s visits to Kiribati and Samoa, China signed separate bilateral deals with the two nations. The agreements signed in Kiribati last Friday focus on a range of areas including development planning, infrastructure, health and pandemic response, climate change, and maritime affairs.

In Samoa on Saturday, China and Samoa signed an economic and technical cooperation agreement and two smaller cooperation projects, including for the construction of a police academy, according to a Samoan government statement.

“The agreements China is signing with the Pacific Islands nations today represent the early steps on the road toward more ambitious goals,” said Vuving.

“They may just talk about security cooperation in vague terms, but they are to pave the way for China’s ultimate military presence,” he said.