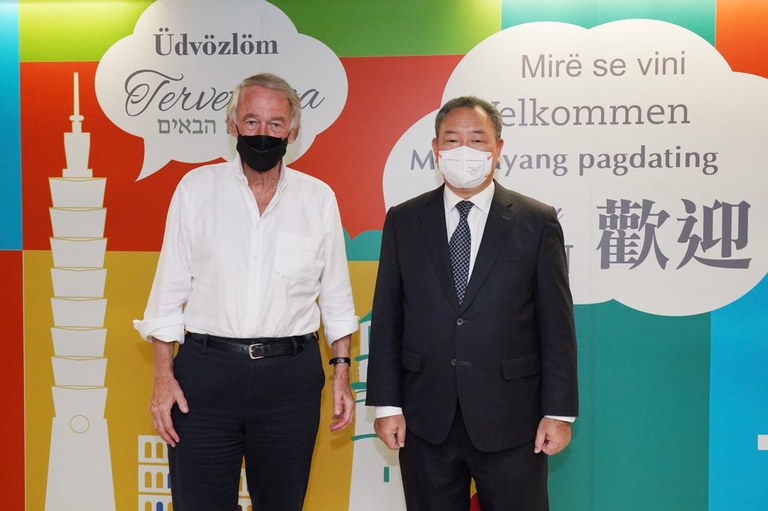 China conducted a fresh round of military drills around Taiwan on Monday as another U.S. Congressional delegation visited in Taipei and met with President Tsai Ing-wen, just 12 days after the controversial stopover by Speaker of the U.S. House of Representatives Nancy Pelosi.

When Pelosi, the most senior U.S. official to visit Taiwan in 25 years, arrived in Taipei, Beijing responded by launching an unprecedented week-long military exercise around the island.

The Chinese military said Monday’s drills were “a serious deterrent to the continued ‘political tricks’ played by the United States and Taiwan,” Reuters reported.

A Chinese state newspaper called the two-day visit by the U.S. delegation led by Democratic Senator Ed Markey “sneaky” and “provoking tensions” in the Taiwan Strait.

On Friday, Deputy Assistant to the U.S. President and Coordinator for the Indo-Pacific Kurt Campbell said Beijing used Pelosi’s visit as a “pretext to launch an intensified pressure campaign against Taiwan.”

“China has overreacted, and its actions continue to be provocative, destabilizing, and unprecedented,” Campbell told a press briefing in Washington D.C., adding that the U.S. will be “conducting standard air and maritime transits through the Taiwan Strait in the next few weeks.”

Markey and four other U.S. lawmakers are making the Taiwan visit as part of a “larger visit to the Indo-Pacific region,” the American Institute in Taiwan (AIT) – the U.S.’s de facto embassy in Taipei – said in a press release.

“The delegation will have a meeting with President Tsai Ing-wen and visit the Taiwanese Legislator’s Foreign and National Defense Committee,” it said. The meeting with Tsai has already taken place.

“The visit is not a challenge to China but to re-state what Biden administration officials and Biden himself have told their Chinese counterparts: U.S. Congress members have the right to visit Taiwan,” said Norah Huang, associate research fellow at the Prospect Foundation, a Taiwanese think-tank.

“The visit is important as to reiterate the U.S. support to Taiwan, that the U.S. is implementing its One China Policy and isn’t intimidated,” Huang told RFA.

Meanwhile, the U.S. Navy’s only forward-deployed aircraft carrier USS Ronald Reagan has been operating in the waters east of Taiwan, likely to offer support to U.S. activities including the Congressional visit.

U.S. Defense Secretary Lloyd Austin ordered the carrier and its strike group to “remain on station” in the area to monitor the situation in the wake of Pelosi’s visit.

4,900 sailors aboard the USS Ronald Reagan have been rehearsing to “maintain the ship’s warfighting readiness,” said the U.S. 7th Fleet in a press release.

On Sunday, 22 Chinese aircraft entered Taiwan’s air defense identification zone (ADIZ) with half of them crossing the median line dividing the Taiwan Strait, according to Taiwan’s Ministry of National Defense.

An ADIZ is an area where foreign aircraft are tracked and identified before further entering into a country’s airspace.

Since the latest military drills, Chinese aircraft have crossed the median line, which serves as the de facto boundary between Taiwan and China’s mainland, daily. Taipei calls it an act of “unprovoked intimidation.”

Taiwan’s Foreign Ministryុំ in an welcome statement to the U.S. lawmakersុំ said: “As China is continuing to escalate tensions in the region, the U.S. Congress has again organized a heavyweight delegation to visit Taiwan, demonstrating a friendship that is not afraid of China’s threats and intimidation, and the U.S.’s strong support for Taiwan.”

“Markey is a seasoned China hawk, who often chides China on human rights issues,” noted China’s mouthpiece Global Times, recalling that in March 2020, the Senator co-introduced a bipartisan resolution calling on the International Olympic Committee to move the 2022 Winter Olympics out of China.

The U.S. Congressional visit “shows that the U.S. has ignored China’s stern warnings and will have to face severe punishment due to its egregious provocations,” Zhang Tengjun, an analyst at the China Institute of International Studies, was quoted as saying.

The delegation’s visit, which “was only made public at the last minute when they arrived in a sneaky and stealthy manner, exposed their diffidence in triggering anger from the Chinese mainland,” Zhang told the paper.

Markey’s office, meanwhile, said the delegation “will reaffirm the United States’ support for Taiwan as guided by the Taiwan Relations Act, U.S.-China joint communiques, and six assurances, and will encourage stability and peace across the Taiwan Strait.”

Before the visit, Biden’s Indo-Pacific Coordinator Kurt Campbell said that the U.S. and Taiwan are “developing an ambitious roadmap for trade negotiations, which we intend to announce in the coming days.”

“This is not something super sensitive but a trade agreement is important for Taiwan as it could have a sampling effect for other countries which are interested in negotiating trade deals with Taiwan,” said Norah Huang from the Prospect Foundation.