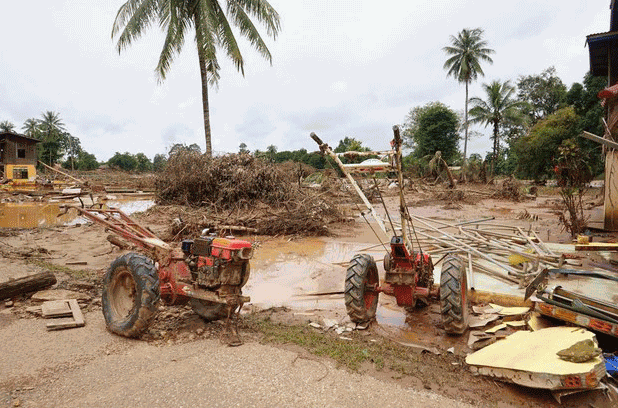 More than four years after a dam collapse in southern Laos triggered the country’s worst flooding in decades much of the farmland that was underwater remains unusable, leaving some survivors still struggling to scratch out a living.

Residents of four villages in Attapeu’s Sanamxay district told RFA they cannot plant rice in their old fields because their land remains covered with mud and debris from the flood, while new land set aside on high and sandy ground cannot sustain rice paddies.

“Our lives are now unstable and unsustainable because we lost the most valuable property; that is, our rice fields,” one Thasengchanh villager who asked not to be identified told RFA. Thasengchanh is one of four villages in the district where flood survivors live. The others are Dong Bak, Hinlad and Samong Tai.

“Some places are covered by up to one meter of mud and sand, and some other places look like lakes,” the villager said. “They should clean up the mess for us. They’ve swept the surface of some rice fields, but then they stopped, saying they didn’t have any more money to continue the work.”

Billions of cubic feet of water from a tributary of the Mekong River poured over a collapsed saddle dam at the Xe Pian-Xe Namnoy (PNPC) hydropower project in Champassak province on July 23, 2018.

The water surge washed away homes and flooded villages downstream in Attapeu province, killing 71 people and displacing 14,440 others when it wiped out all or part of 19 villages. Those who lost their homes were relocated to other villages.

The Lao government, which continues to plan and build hydropower dams at blistering speed, despite grappling with crushing debt, has yet to rectify the problem, survivors of the dam break said.

Most of the fields in Dong Bak cannot be cultivated because of the mud, rocks, sand, logs and tree limbs that remain, a resident of the village told RFA on Aug. 10.

Up to now, Attapeu authorities have handed over 729 new land titles to families in Hinlad, Dong Bak and Samong Tai villages.

Some families have been able to clean up their damaged farmland by themselves so they could plant rice this year, while others have had to acquire fields elsewhere in order to grow the staple crop, said the resident, who declined to be named so as not to anger authorities.

“But most of the survivors are not able to grow rice on their old rice fields at all; they can only grow cassava and raise chickens and pigs on the new land given to them by the authorities,” he said. “They grow cassava, then sell [it] to buy rice.”

Several villagers have been forced to work as laborers in the nearby areas and cities to earn money to feed their families, he said.

‘Nobody dares to grow anything’

In Hinlad, only about 100 families out of nearly 1,000 are now able to reuse their land to grow rice, said a resident of the village who, like other sources, requested anonymity so as not to anger authorities by speaking to the media.

New land given as compensation is too high and has too much sand and gravel to grow rice, he said.

“We only grow cassava on the land, then sell it to buy rice,” said the villager. “The price of cassava is good, but rice is getting more and more expensive.”

Another resident said that most of the villagers have not grown rice since the dam break, as debris, including scrap metal and broken glass, still litters their land.

“Nobody dares to grow anything,” he said. “Of course, we want to grow rice, especially during this rainy season, which is the rice-planting season.”

“Most of us are worse off,” he said. “We’re poorer than we were before the dam break because we can’t grow rice on our rice fields in our old villages.”

More than 120 families in Thasengchanh village received land titles for new parcels but refused to accept them, saying they had been given only one hectare per family, while other villages received one hectare per person.

Former owners of the land the survivors were given can still claim it as theirs and block attempts to farm it, the survivors told RFA.

An official from the province’s Agriculture and Forestry Department said on Aug. 10 that authorities cannot clean up the debris and clear the mud from rice fields that were severely flooded and damaged.

“We’ve allowed some families to grow rice on about 24 hectares of the old rice fields because these fields were not badly damaged by the flood, ” he said. “The total most affected rice fields are more than 1,000 hectares.”

“Our provincial authorities have a plan to grant a concession to foreign investors to grow industrial trees on the badly damaged farmland and have asked the survivors to participate in the project,” he said.

The villagers would provide their land and labor, while the investors would provide capital, expertise and market opportunities, the official said, adding that the plan is now undergoing a feasibility study.

“We have a company proposing to grow bamboo for export,” he said. “The company is gathering information on about 100 hectares of the old rice fields.”

By the end of this year authorities are planning to clear a new 200-hectare lot of land for residents of the Thasengchanh village who did not accept the new land parcels, the Agriculture and Forestry Department official said.

Soaring inflation in Laos has made a bad situation worse, as people struggle to afford the skyrocketing costs of gasoline, cooking oil and other daily necessities.

“The survivors’ livelihoods have been quite severely affected by the 2018 dam breach and that they haven’t been properly compensated,” said Ian Baird, director of the Center for Southeast Asia Studies at the University of Wisconsin-Madison told RFA in early August. “Right now, the survivors are living like refugees. They should receive more compensation.”

Sanamxay District Governor Soulivong Aphaivong disputed the villagers’ accounts in an Aug. 5 RFA interview. He said that many of the disaster survivors were in fact growing rice.

“Last year, they got tons of rice,” he said. “The irrigation system has been completed. Of course, those whose rice fields still have a lot of gravel, sand and other debris couldn’t grow rice because the water from the dam break pushed down all the rock, sand and trees to the villages.”

The government has cleared more than 1,000 hectares of land for villagers still unable to grow rice, Soulivong said.

“They grow cassava on the land, then they make good money,” he said. “A family can make up to 30 million kip ($1,952) per season. We’re helping them to get on their feet little by little and step by step. We can’t recover everything [and get it] back to normal overnight.”

Attapeu Province authorities cleared 1,545 hectares of new farmland for 852 families affected by flooding from the dam breach, according to official records.

Most of the money has been spent on the construction of basic infrastructure, including roads, electricity installation, water supply, schools, hospitals and 700 permanent homes for the affected villagers, he said.

Sanamxay district promised it would build the homes for the survivors by the end of 2020, but to date, less than half of them have been completed, RFA reported in early August.

“Right now, our focus is to speed up the construction of these 700 permanent homes as planned, meaning that all the 700 homes will be 100% completed by this year’s end,” Leth was quoted as saying.

Translated by Max Avary for RFA Lao. Written in English by Roseanne Gerin.