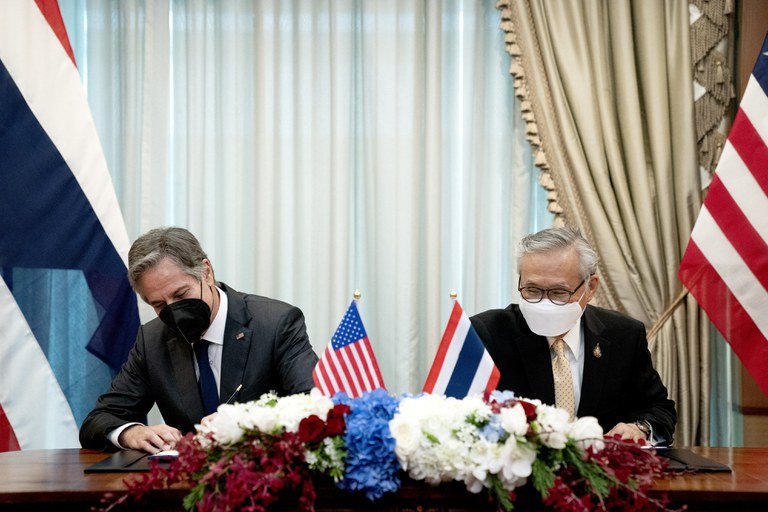 U.S. Secretary of State Antony Blinken on Sunday urged Thailand along with ASEAN members and China to push Myanmar’s junta to end violence against its people and move back toward democracy following a meeting in Bangkok with Prime Minister Prayuth Chan-o-cha.

Speaking to reporters after the meeting, Blinken called on the region’s government leaders to push the junta, which overthrew Myanmar’s democratic government in February 2021, to live up to a plan agreed upon two months later. Earlier, he signed a pair of cooperative agreements with Thailand’s foreign minister.

“The United States is working with Thailand and all of ASEAN to push Burma’s regime to fulfill the Five-Point Consensus, end its brutal violence and put Burma back on the path to democracy,” Blinken said, using the old name for Myanmar and the acronym for the Association of Southeast Asian Nations.

“It is incumbent on China and in China’s interest to see Burma move back to the path it was on,” he also said.

While junta government leader Senior Gen. Min Aung Hlaing agreed to the consensus in April 2021, his government has not implemented it. The consensus included an immediate end to violence in the country, the distribution of humanitarian aid, dialogue among all parties and the appointment of an ASEAN special envoy to Myanmar who would be permitted to meet with all stakeholders.

“Unfortunately, it is safe to say that we have seen no positive movement. On the contrary, we continue to see the repression of the Burmese people,” Blinken said, noting members of the opposition are in jail or in exile. “The regime is not delivering what is necessary for the people.”

More than 2,065 civilians have been killed in Myanmar since the coup, according to Thailand’s Assistance Association for Political Prisoners.

After traveling to Thailand from Bali, Indonesia, where he had attended the G20 foreign ministers meeting last week, Blinken also met with his Thai counterpart, Don Pramudwinai. They signed the U.S.-Thailand Communiqué on Strategic Alliance and Partnership.

“Our countries share the same goals – the free, open, interconnected, prosperous, resilient and secure Indo-Pacific. In recent years, we worked together even more closely toward that vision,” Blinken said.

“I’m especially pleased to be in Thailand at a time when we have an ally and partner in the Pacific of such importance to us in the region that is shaping the trajectory of the 21st century and doing that every single day.”

The communiqué, which noted the nations will celebrate their 190th anniversary of diplomatic relations in 2023, listed long-term goals of expanding and strengthening the strategic partnership to prevent conflict, preserving a peaceful security environment, promoting free expression and civil and political rights, and achieving inclusive, sustainable and balanced economic prosperity.

“We pursue these goals as equals, for the benefit of the Thai and American people, as well as for the rest of the Indo–Pacific populations and the wider world. We seek to work together to ensure the resilience of critical supply chains, so that both our nations have access to the goods and resources required to preserve our safety, security and prosperity,” it said.


Blinken and Don also signed a memorandum of understanding regarding the supply chain between the two nations.

Blinken’s trip followed a five-hour meeting on Saturday with Chinese Foreign Minister Wang Yi in Bali and as the two superpowers focus on maintaining their relationships with Thailand and other Southeast Asian nations. Wang visited Bangkok before traveling to Bali.

Speaking to reporters in Bali, Blinken said, “What we’re about is not asking countries to choose, but giving them a choice, when it comes to things like investment in infrastructure and development systems.

Wang traveled to Bangkok on July 5 where he held similar meetings with Prayuth and Don.

“We both agree on many issues. We agreed to jointly build joint societies for the future of Chinese and Thais, making it a guideline to future joint cooperation for both countries. … The objective of the joint societies is to stress that Chinese and Thai are no strangers but kin. The relationship is robust,” Wang told reporters in Bangkok after meeting with Don.

Blinken is to travel to Tokyo where he will offer condolences on Monday to Japanese officials following the assassination of former Prime Minister Shinzo Abe.

BenarNews is an RFA-affiliated online news service. Dandy Koswaraputra in Jakarta contributed to this report.