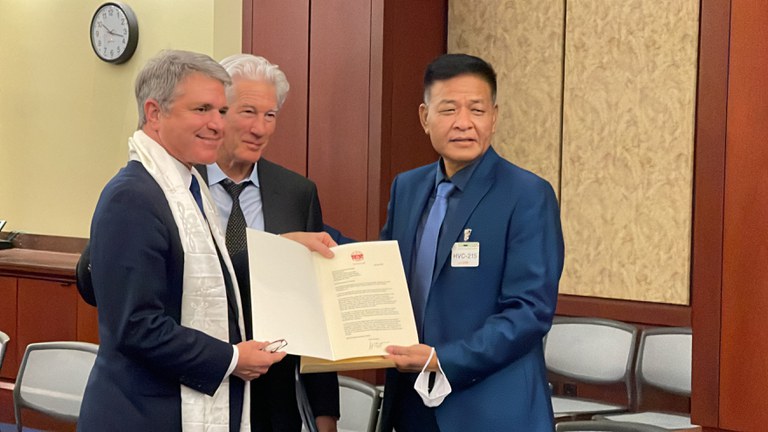 Tibetan exile leader Penpa Tsering has wrapped up his first official visit to Washington D.C. with a meeting on Thursday with House Speaker Nancy Pelosi and other congressional leaders and public talks scheduled for Friday evening.

Tsering — the Sikyong or elected head of Tibet’s India-based exile government the Central Tibetan Administration — began his visit on Tuesday with talks held with Uzra Zeya, the State Department’s Special Coordinator for Tibetan Issues. The Department also hosted a lunch for Tsering attended by ambassadors from the Czech Republic, Denmark, Canada, the United Kingdom and other countries.

Speaking to RFA after the meeting, Choedup noted this week’s visit to Washington was the first by Tsering, a former speaker of Tibet’s exile parliament in Dharamsala, India, who won a closely fought April 11, 2021 election to become Sikyong held in Tibetan communities worldwide.

Formerly an independent nation, Tibet was invaded and incorporated into China by force more than 70 years ago, and Tibetans frequently complain of discrimination and human rights abuses by Chinese authorities and policies they say are aimed at eradicating their national and cultural identity.

“We are trying to burst the myths or narratives that the Chinese government has been presenting for many decades about Tibet being a part of China, which is not true,” said ICT board chairman Richard Gere, also speaking to RFA on Thursday.

“And we are trying to push for a genuine dialogue [between China] and His Holiness the Dalai Lama,” Gere added.

The Dalai Lama and Tibet’s India-based exile government the Central Tibetan Administration have proposed a “Middle Way” approach to talks with Beijing that now accepts Tibet’s status as a part of China but urges greater freedoms for Tibetan language, religious, and cultural rights.

Nine rounds of talks were previously held between envoys of exiled spiritual leader the Dalai Lama and high-level Chinese officials beginning in 2002, but stalled in 2010 and were never resumed.

Congressional supporters of the Dalai Lama “would love to have the Dalai Lama address a joint session of the U.S. Congress by video,” said representative from Texas Michael McCaul, a ranking member of the House Foreign Affairs Committee.

”The American people stand with the Tibetan people and with the Dalai Lama, who is one of the greatest spiritual leaders of our time,” McCaul said.

Penpa Tsering ends his Washington visit Friday evening with a panel discussion held at George Washington University on the Tibet-China dialogue and a public talk with the D.C.-area Tibetan community. He will then visit Tibet communities in Philadelphia and New York before moving on to meetings in Canada.