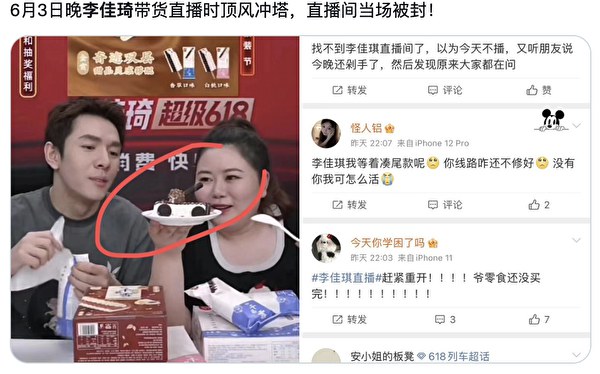 Chinese censors shut down the livestream of beauty influencer Austin Li after he displayed a tank-shaped cake ahead of the 33rd anniversary of the Tiananmen massacre, as former student leaders reflected on the June 4, 1989 crackdown from overseas.

Li’s livestream was taken off air on Friday shortly after he showed an ice-cream dessert in the shape of a tank, prompting fans to wonder what unknown event he could have been referring to.

Public commemorations of the massacre, in which the People’s Liberation Army (PLA) mowed down unarmed civilians with guns and tanks to end a weeks-long mass protest movement in Tiananmen Square, are banned in China.

The ruling Chinese Communist Party (CCP) rarely allows any public reference to the event, although it describes the protests that preceded it as “countterevolutionary turmoil.” Online references to the events of June 4, 1989, including images of tanks, are swiftly deleted by government censors.

Now, Li may have introduced a new generation of 170 million largely unsuspecting fans to the violent crackdown that left hundreds, possibly thousands, dead.

Li attributed the premature ending of his livestream to a “backstage technical failure,” but hadn’t updated his social media account by Monday.

A current affairs commentator who gave only the surname Su said anything that refers to the events of spring and early summer 1989 is politically sensitive for the CCP.

“He’s the second most popular anchor after Wei Ya, and he has thousands of people among his suppliers,” Su said. “He has so many people around him, yet he was silly enough to promote a tank-shaped dessert on June 3.”

“Why did his production team fail to detect or block such a common-sense issue; there must be some kind of problem,” he said.

Su said Li was unlikely to re-emerge following the incident.

“Given the current political environment, he is finished for sure, or at least will just fade away from the public eye,” Su said.

Massacre survivors, victims’ families and prominent dissidents are typically placed under house arrest or similar restrictions by state security police during the anniversary, only to be released when the date has passed without incident.

Qi Zhiyong, a massacre survivor who had both legs crushed by a tank in June 1989, said he had been forced to leave town with a state security police escort.

“I was taken away from my home on May 28 by police, who confiscated my mobile phone,” Qi told RFA. “But my dialysis appointments weren’t affected.”

“There are police and security guards at the entrance to my apartment complex,” he said.

“All of my energy is devoted to this project now,” Wang, who also founded the Dialogue China think-tank since arriving in the U.S. on medical parole 24 years ago.

He said the overseas democracy movement was the best exiled dissidents could do for China, and suggested that CCP leader Xi Jinping’s zero-COVID policy could open some younger people’s eyes to the nature of the regime.

“We’re already seeing the effects of the Shanghai lockdown,” he said. “I think a lot of little pinks [CCP fans] in Shanghai, and many millennials will be realizing that this society isn’t as beautiful as they once believed.”

Former 1989 student activist Zhou Fengsuo, who founded the rights group Humanitarian China after arriving in the U.S., said his organization manages to support more than 100 prisoners of conscience annually.

“That has added up to more than 1,000 people over the years,” he said. “We hope that more people will come to know about them, and to thereby understand the human rights situation in China.”

Former Shandong student activist Bob Fu has worked to promote religious freedom in China since becoming a Christian in the wake of the 1989 crackdown, founding the Texas-based group ChinaAid.

A member of the millennial generation who gave only the surname Li said he thought everyone should understand what happened in 1989.

“June 4, 1989 is something that every Chinese person should remember,” Li said. “We can learn a lot from the way the students were thinking, from their spirit, now.”

“But a lot of people don’t have access to the internet outside the Great Firewall, including a lot of Generation Z, so they don’t know about such things, and have never heard of any of it.”

A slightly older man from Shanghai surnamed Wang said CCP brainwashing has been particular effective among the younger generation.

“If anyone mentions freedom and democracy, they tell you that you can’t eat those things,” Wang said. “They really support the current regime with all their hearts.”

“It’s clear that this brainwashing [patriotic] education they received has been hugely successful, from the point of view of those who rule,” he said.

Zhou said he realizes how far there is to go.

“Of course so far, this has been a losing battle,” he said of China’s faltering democracy movement. “But before the CCP falls, many more people will have to get involved in this losing battle.”

“For those who are in it and are still fighting against this authoritarian regime, at least they have the courage to resist, the spirit of perseverance. This is worthy of huge respect.”