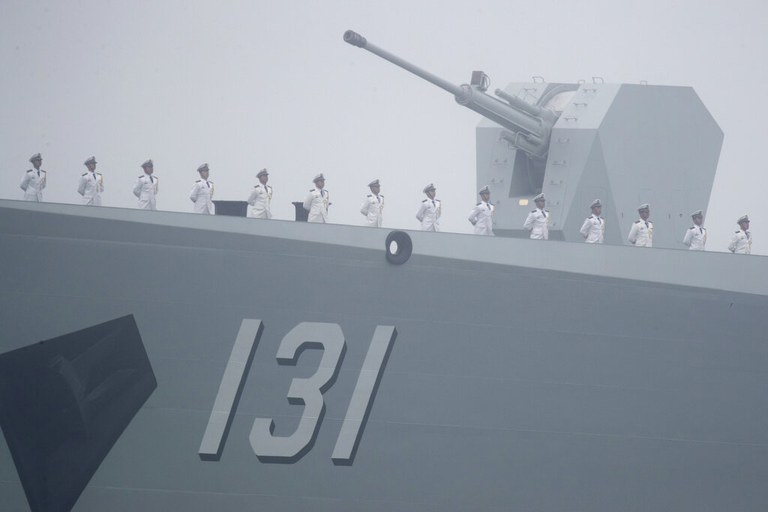 The Solomon Islands prime minister has told lawmakers that a controversial security agreement with China is “ready for signing” without revealing the details, saying only that his government had not been pressured to let China build a naval base in the country.

Prime Minister Manasseh Sogavare made the remarks to Parliament late Tuesday, according to multiple news reports. Neighboring powers have expressed concern over the pact that China has defended as normal cooperation with Pacific island nation.

“We are not pressured in any way by our new friends and there is no intention whatsoever to ask China to build a military base in the Solomon Islands,” Sogavare was quoted as saying.

A draft agreement leaked online last week would allow Beijing to set up bases and deploy troops in the Solomon Islands, which lies about 1,700 kilometers (1,050 miles) from the northeastern coast of Australia. The document provoked fears in the region’s traditional powers, Australia and New Zealand, with the New Zealand Prime Minister Jacinda Ardern saying that her country sees the pact as “gravely concerning.”

It is unclear whether the leaked draft differs from the final agreement.

Sogavare told Parliament that in order to achieve the nation’s security needs, “it is clear that we need to diversify the country’s relationship with other countries” but existing security arrangements with Australia would remain.

His policy of “diversification” was evident last November when Sogavare asked Australia, and after that China, to send police forces to help him quell violent riots that rocked the capital, Honiara.

Alexander Vuving, a professor with the Hawaii-based Daniel K. Inouye Asia-Pacific Center for Security Studies, said Sogavare’s strategy is not unusual for leaders of small Pacific island states who are “willing to play the major powers off against each other, thus bloating their states’ values to the major powers.”

A Chinese Foreign Ministry’s spokesman said on Tuesday that “normal law enforcement and security cooperation between China and Solomon Islands … is consistent with international law and customary international practice.”

“We hope relevant countries will earnestly respect Solomon Islands’ sovereignty and its independent decisions instead of deciding what others should and should not do in a condescending manner,” spokesman Wang Wenbin said.

China’s growing presence in the Pacific

Beijing doesn’t hide its ambition to set up military bases in the region. Some Chinese analysts, such as Qi Huaigao, an associate professor at Fudan University, suggested that in order to compete with the United States in the Western Pacific, China needs to have bases in Solomon Islands, Samoa and Vanuatu for commercial and military supply purposes.

In 2018, media reports about China’s plan to build a base in Vanuatu prompted a stern warning from the then Australian Prime Minister Malcolm Turnbull.

David Capie, director of the Centre for Strategic Studies at the Victoria University of Wellington in New Zealand, told RFA earlier this week that China “wants to be able to operate its rapidly growing navy out in the wider Pacific, complicating U.S. plans in the event of a future conflict.”

“A base in the Pacific would let People’s Liberation Army Navy vessels operate far away from their home ports for longer and in the future might also be used for intelligence gathering and surveillance,” he said.

It would greatly boost China’s capabilities in intelligence-collecting which is alleged to have often been done by marine research vessels.

Data provided by the ship-tracking website MarineTraffic show that China’s spacecraft-tracking ship Yuanwang-5 is currently operating in the Western Pacific, not far from the Solomon Islands.

The Yuanwang-5’s presence is normal but “it would not be surprising if it makes a port visit to Honiara as part of the deployment in order to register the seriousness of China’s intent in the region,” Buchanan said.