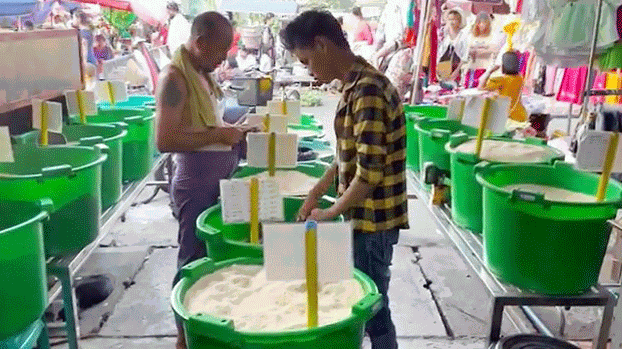 The price of rice, a food staple in Southeast Asia, and other commodities has shot up as much as 50 percent over the last two months in Myanmar, another hardship for the country’s beleaguered citizens, many of whom have already had to flee their homes because of ongoing conflict, traders and consumers said.

The average cost of basic food on average in Myanmar has risen by 35% in the past year, according to recent data compiled by the World Food Program.

The inflation has hit hard low-income people who now have difficulty affording even lower quality rice and are dealing with a shortage of jobs since the democratically elected government was ousted, sources said. Low-quality rice that used to cost 25,000 kyats (U.S. $12) is now selling for 45,000 kyats (U.S. $21), said a low-income Yangon resident.

“Right now, it’s very hard for manual laborers to earn money,” he said. “Manual laborers need to get money first to have their meals, and then they can buy rice in the evening after work.”

The price increases have made lives even harder for the 1.2 million internally displaced persons (IDPs) who have fled their homes due to the fighting, aid workers said.

Most IDPs are living in areas where transportation is difficult. Meanwhile, military checkpoints have restricted the movement of food along major routes, pushing up the cost of supplies, they said.

A member of the Mindat township IDP Camps Management Committee in western Myanmar’s Chin state, where fighting between military forces and opposition groups has been intense, said the cost of transporting goods is double what it is in other areas and rice has to be smuggled in.

“In faraway places, the price reached almost 100,000 kyats when the cost of transportation, which is about 50,000 kyats, was added to the original price,” said the aid workers, who declined to be identified out of fear for his safety.

“We haven’t had any donations for the IDPs for the last two months, so we can’t buy rice anymore,” he said. “We won’t have supplies for distribution for the rest of August or for September and October.”

“COVID-19 issues, political issues and internal instability in central parts of Myanmar along with the rising costs of fertilizer and fuel in international markets are to blame,” he said.

“Fertilizer prices have tripled,” he said. “Farmers have to use fertilizers and fuel and so their production costs have also risen. Moreover, rice mills have had to install generators due to the decrease in the electric power supply, resulting in an increase in production costs.”

‘Fleeing for our lives’

Shwebo Pawson, the most expensive and popular rice in Myanmar, is usually grown in Shwebo, Kantbalu, Khin U, Ye U and Taze townships in northwestern Myanmar’s Sagaing region, where the fighting between military and opposition forces has been particularly intense.

In an effort to clear the area, government troops have burned dozens of homes and other structures in recent weeks. Some farmers have been unable to plant rice or other crops this year, while others cannot properly care for their cultivated fields, said residents of the townships.

A farmer in Shwebo township said he and other residents have not been able to work because they have been forced to run from Myanmar soldiers.

“We have been fleeing for our lives to safety because of the military attacks, and many of the fields have been left unattended,” said the farmer who did not provide his name because of safety reasons.

In the Ayeyarwady region, Myanmar’s rice bowl, farmers have been grappling with a drought amid what is supposed to be the rainy season. They say they are unable to make capital inputs and have had to cultivate fewer acres because of high production costs.

Myanmar has more than 17 million acres of rice paddies in production, but the country’s agricultural targets have not yet been met, military junta leader Sr. Gen. Min Aung Hlaing said in the capital Naypyidaw on Aug. 8.

He warned that officials may need to adjust how much rice is exported and how much is set aside for domestic consumption. But Myanmar still plans to export rice and green beans, he said.

An economist, who declined to be named so as to speak freely, said that statement may mean the junta could seize rice stocks to generate revenue, further pushing up the price.

“They themselves have announced that they are going to export rice and green beans,” he said. “If they do that, they will look for rice in any way they can get and will hoard it.”

With the current shortage of hard currency in Myanmar, the junta appears to be eyeing up rice exports to get badly needed U.S. dollars, the economist said.

“They seem to be planning to get dollars directly into their hands from exports,” he said. “The more they do that, the more the prices of commodities will rise, especially that of rice. Besides, traders will find it difficult to buy [rice] and will keep what they have, so that prices will rise even more.”