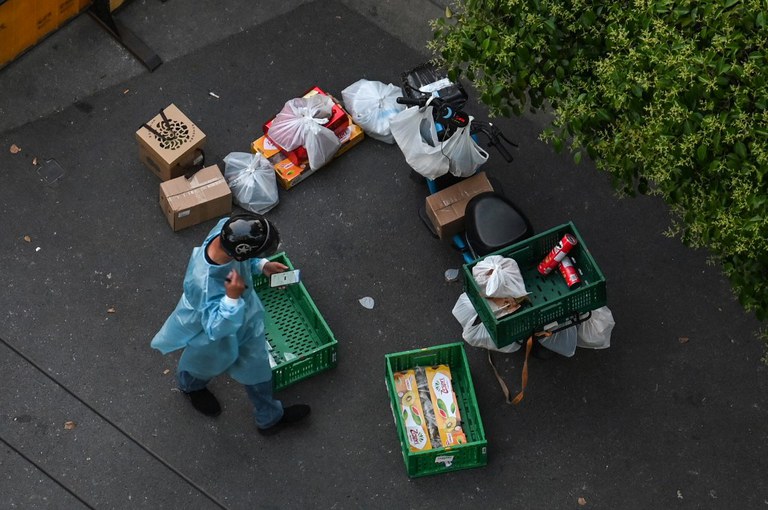 Residents of Shanghai have been reporting their city government to a national fraud hotline after claims of fully stocked, open supermarkets and eateries were posted by a ruling Chinese Communist Party (CCP) newspaper.

Shanghai officials say the city has been free from any new COVID-19 infections for four days straight, as some shops have been allowed to open and public transport will likely resume at the weekend.

Residents of housing compounds are now being allowed out on a limited basis, one person at a time, and with ongoing restrictions on their movements in the local area.

Some 790,000 people remain under total lockdown, while 2.71 million are still subject to strict controls on their movements and 19.8 million are now in “prevention” areas requiring a green health code to travel or access goods and services outside the home.

Citywide testing and contract-tracing will continue, hoping to close in fast on any new infections to contain outbreaks before they can spread, municipal health commission spokesman Zhao Dandan told journalists on Wednesday.

Infected people and close contacts will continue to be sent to isolation facilities, Zhao said.

CCP newspaper the People’s Daily also published a graphic based on the Shanghai government’s plans to reopen food and beverage businesses from May 16, describing breakfast and dim sum bars, fast food joints, hair salons, supermarkets and farmers’ markets as opening up gradually.

Social media users hit out at the graphic, with some people posting screenshots showing they had reported the municipal authorities to a national fraud hotline.

A Xuhui district resident surnamed Zhou said senior officials appear to be ramping up public appearances as part of their “celebration” of zero-COVID.

“The leaders will be putting on a show, including appearing under the Oriental Pearl tower,” Zhou said. “They have already begun rehearsals, and they seem to be getting ready to celebrate.”

Zhou said the compound he lives in remains locked down, and he can’t go out even to buy daily necessities.

“A lot of stores are still closed right now, so there’s no point in going out anyway,” Zhou told RFA. “Even if the stores are open, they have nothing in stock, nothing to buy.”

“If you want to buy stuff, you still have to rely on group buying,” he said.

Zhou said one of the most sought-after items is fresh fruit, with even apples currently selling for prices 50 percent higher than before lockdown.

In a video clip posted to social media, a member of a neighborhood committee in Xuhui accused local residents of breaking disease control regulations by buying in fruit, and stop them from collecting their order.

“Now there are several people dragging me away,” she says. “This is such bullshit. Don’t ordinary people have a right to live as well?”

Current affairs commentator Zhang Jianping said many people are angry over what they say is fake news stories being peddled by the authorities.

“Of course they’re going to be angry, if they’re living through hell in Shanghai right now,” Zhang said. “We should take seriously these accusations of fake news coming from the people of Shanghai.”

“They should take a good look at their content. The police lied and released false information, so this post was bound to cause offense to people,” he said.

Meanwhile, police detained a man surnamed Lu on Tuesday at the China Resources Vanguard supermarket in Global Harbor on suspicion of “conjuring up rumors from thin air,” the Shanghai government said.

Lu had allegedly claimed that the supermarket was being forced to operate by the government under chaotic management and in filthy conditions.

Lu was jailed on an administrative punishment by police in Shanghai’s Putuo district for “disturbing public order with made-up allegations,” it said.

Administrative sentences of up to 15 days can be handed down by police to perceived troublemakers without trial.