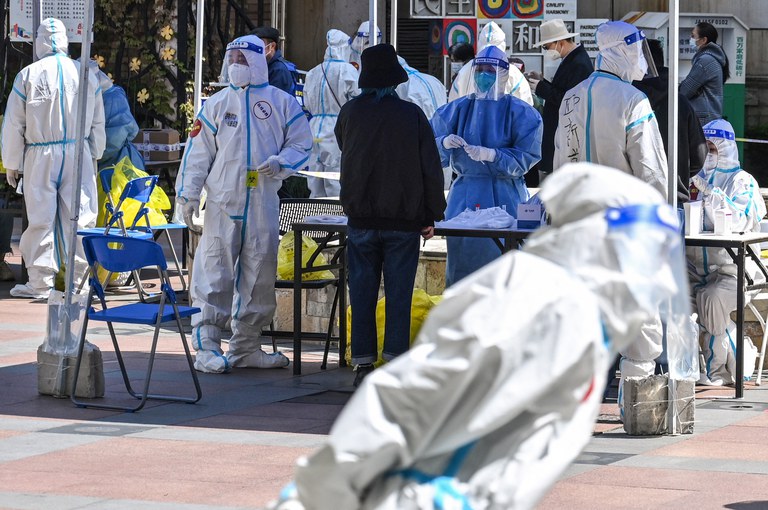 A two-stage lockdown has been in place across the city of 26 million people since March 28, although some residential communities where infections were discovered before that date have been under tight restrictions for far longer.

“The city will continue to implement closures and controls, and continue to strictly implement the stay-home policy except in the case of people seeking medical treatment due to illness,” the Shanghai municipal government said in an April 4 announcement on its official Weibo account.

It said a mass, citywide COVID-19 tests had been completed on Monday, with further testing, review of results and evaluation to be carried out while residents stayed home.

Tens of the thousands of healthcare workers, including 2,000 military personnel, have been dispatched to the city to aid in the testing, isolation and quarantine operation under the ruling Chinese Communist Party (CCP)’s zero-COVID policy.

A front-line healthcare worker in the central city of Wuhan told RFA that some of his colleagues have been ordered to go to Shanghai to help with the testing program.

“Wuhan sent 1,000 people … they told me yesterday it was to carry out PCR tests,” she said.

A Shanghai resident who gave only the surname Feng said armed police had also been drafted into the city, with a constant roar of planes taking off at landing at an airport near her home.

“The armed police came on March 28 and 29, and there are a lot of armed police around right now,” Feng said. “They had been keeping a low profile, but they are much more open since vice premier Sun Chunlan arrived here.”

“Those of us who live near the airport were kept up all night because the rumbling sound from the military transports was so loud, and there were also helicopters flying constantly back and forth overhead,” Feng said.

Sun urged the Shanghai authorities on Saturday to “make resolute and swift moves” to curb the pandemic.

Zhang Jin, an academic who lives in the downtown area of Puxi on the west side of the Huangpu river, said armed police are currently patrolling the gates of his residential community.

“There are special police with guns stationed at the gates of our community, because the older people on the neighborhood committee can’t keep control of the situation,” he said. “They’re afraid there’ll be some kind of incident in Shanghai, which would be a big deal, so they’ve been brought in to keep order.”

But he said he thought the measures wouldn’t be enough to contain the spread of the highly transmissible omicron variant of COVID-19.

“It’s like a broken old paper lantern; you try to patch it up with sticky tape, and then another hole appears,” Zhang said.

A leaked audio recording, apparently between a member of the public and a member of the city’s Center for Disease Control and Prevention (CDC), posted to social media on April 2, suggested that the authorities’ capacity to implement Beijing’s zero-COVID policy on the ground is under huge strain.

“Let me tell you this; hospital wards are full to bursting; there’s no space left in isolation facilities, and there are no ambulances available because they are answering hundreds of calls a day,” the official says. “This has totally overturned the image that Shanghai used to have [in the eyes of the rest of the world].”

“They are now writing down people’s positive tests as negative … our professionals and experts are being driven crazy because nobody is listening to what they have to say,” the official says. “This pandemic has become a political disease, consuming so much manpower, material and financial resources.”

Zhang agreed, saying all of China’s COVID-19 measures are now purely political. “I heard there were people testing positive at the National People’s Congress (NPC) [in March], but they weren’t being allowed to report it [as a positive result].”

The secretary of one neighborhood committee admitted the system is now “a mess.”

“I need decent policies coming down from higher up that I can explain to the residents, but that’s not what is happening here, not at all,” she said. “This job is leaving me physically and mentally exhausted, and my heart-rate is up to 100 beats per minute right now. I just can’t do this.”

“Right now I’m trying to order food supplies for residents [before it runs out], and I’m taking your call. I’m under a lot of pressure,” the neighborhood official said.

Shanghai residents have been taking to Twitter with fears that they could run out of food entirely, as takeout and supermarket deliveries are becoming less and less available in some districts.

Feng confirmed these reports, saying many of the delivery drivers have themselves been forced into isolation camps by the HealthCode app, while deliveries are being prevented from entering the city from elsewhere in China, leaving huge quantities of food to spoil at roadsides and be wasted.

Current affairs commentator Si Ling said the restrictions have made it well nigh impossible for logistics firms to operate in and out of Shanghai.

“Even if trucks can get into Shanghai, it’s hard for them to get out,” Si said. “A lot of logistics companies are therefore reluctant to send vehicles into Shanghai … because they think it’s too expensive and time-consuming.”

“The Chinese government has made every aspect of the pandemic very bureaucratic, with huge amounts of red tape, and it hasn’t taken the needs of logistics companies [part of the supply chain] into account,” he said.

Sun’s comment during her visit to Shanghai was interpreted by a leaked Zhejiang provincial document as showing hard-line support from CCP leader Xi Jinping for zero-COVID, despite the massive logistical challenges it brings.

Zhejiang and Jiangsu authorities are now being forced to accommodate tens of thousands of Shanghai residents after the city’s own facilities filled up, according to online accounts, confirmed by writer and commentator Chen Feng.

“Basically, they will send 1,000 or 2,000 people per province, or about 900 people to a smaller province like Hainan,” Chen told RFA. “This model has been evolved from the Wuhan and Xi’an [lockdowns] and the thinking is the same in [the northeastern province of] Jilin.”

“Logically speaking, they have to harden their position now … so people can see that [China] is the most successful [at dealing with COVID-19],” he said. “They can’t go back on their announcement, so it’s all about slogans and determination.”

“He hasn’t appeared in public, and he’s been replaced now,” U.S.-based doctor Yang Jingduan told RFA. “Clearly, this has more to do with politics than with pandemic control and disease prevention.”

Former U.S. Army research virologist Lin Xiaoxu said Zhang’s views were very much in line with the international consensus of experts on COVID-19.

“But Beijing just sticks to its original insistence on the so-called zero-COVID policy, because everything in China is dictated by politics,” Lin said.

“Shanghai’s epidemic prevention measures have taken the wrong route, because of huge pressure [on the municipal authorities] from the central government,” he said, adding that the policy could cost Xi Jinping dear.

“If the Shanghai lockdown hits China’s economy really hard, then different factions within the CCP’s ranks will use this as an excuse to criticize the wisdom of the zero-COVID policy,” Lin said. “This could lead to fiercer factional strife within the party.”

He said internal dissent could scupper Xi’s bid for an unprecedented third term in office at the CCP’s 20th Party Congress later this year.