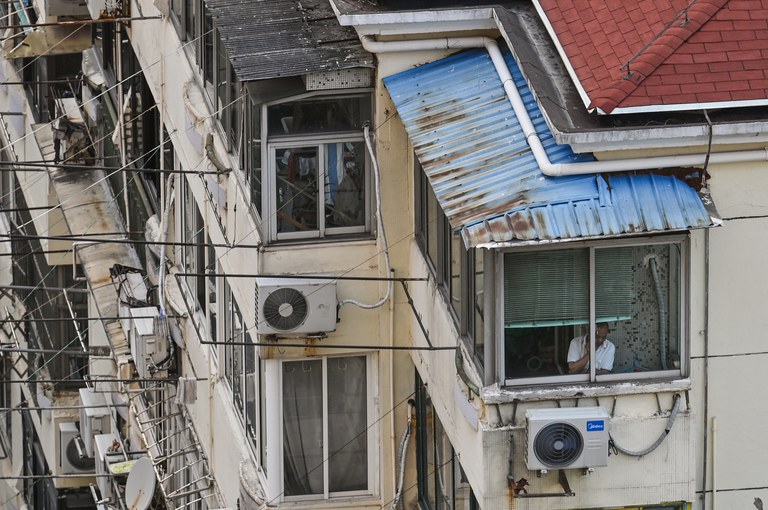 “Shanghai’s epidemic prevention and control is at the most difficult and most critical stage,” municipal health official Wu Qianyu told journalists.

“We must adhere to the general policy of dynamic clearance without hesitation, without wavering.”

Wu’s announcement came amid public anger over food shortages amid a citywide logistics crisis, the separation of parents and children in compulsory isolation facilities and the culling of family pets.

More than 1,000 Shanghai residents petitioned online for asymptomatic children to be allowed to isolate at home, but the petition was no longer available on the social media platform WeChat on Tuesday, Reuters reported.

The announcement came after vice premier Sun Chunlan “rushed” to to Shanghai from the northeastern city of Jilin to call on the city not to relax its grip on the virus.

“We must adhere unswervingly to the general policy of ‘dynamic zero’ without hesitation, have a resolute and firm attitude, and act swiftly and powerfully,” Sun told municipal leaders in comments reported by state news agency Xinhua.

“We want to ask if you’re going to solve our livelihood issues,” one resident asks Li, who proceeds to listen to some of their concerns.

A Shanghai resident surnamed Zheng said the lockdown is a crude way of managing the virus, and its impact on people’s daily lives has been huge.

“I wrote a letter to the mayor myself, and they replied that it had been passed on, but no one came, so I had to find a way to buy food by myself,” Zheng told RFA.

“It is hugely troublesome because courier companies aren’t allowed to deliver now, supermarkets aren’t allowed to open and stores are closed,” he said. “They said they would organize group buying, but the vegetables were horribly expensive.”

“We haven’t seen any of the vegetables sent by other provinces to support us here in Shanghai,” Zheng said.

Zheng said local officials had been accused of price-gouging in the group-buying business and some had resigned.

“The party secretary and mayor of Cai township in the northeast of Pudong stepped down … they earned 20 to 30 million yuan out of just a few days [of lockdown],” he said.

‘No different than a lockdown’

While authorities announced on Monday that residents of thousands of residential communities would be allowed to move around in a limited manner for the first time in weeks, a resident surnamed Chen said this didn’t appear to have been implemented on the ground.

“It just allowed people to move around within their compound, not to go out,” he said. “It’s no different than a lockdown.”

Meanwhile, seriously ill patients across the city remain locked out of life-saving medical care by COVID-19 restrictions and ward closures that are being blamed in part on the diversion of the city’s healthcare personnel to compulsory mass testing programs.

Economist Lang Xianping posted on Weibo that his mother had died of kidney failure after multiple PCR tests had failed to yield results soon enough to get her admitted to hospitals in the city.

“I was in shock,” Lang wrote. “My mom left me forever after waiting at the door of the ER for four hours.”

He said he had been unable to see her one last time. “This tragedy could have been avoided,” Lang wrote.

‘Little better than a slum’

Tensions were running high in locked-down communities, with people shouting out of windows that they were “going crazy” or “dying” or “need supplies.”

Several videos circulating online showed authorities unable to respond to the explosion of numbers in need of quarantine beds, with 6-12 people to a room in hastily built field hospitals.

In one, the person shooting the scene says the facility is “half-finished” and that everyone had to go and fight for their own bedding.

“It’s little better than a slum,” the person says.

Another video, titled “one person, one box”, showed confirmed COVID-19 patients sleeping in rows of long cardboard boxes alongside their personal belongings.

Li Zhenghong, president of the Shanghai Taiwan Business Association, said member companies are having trouble sourcing supplies of coal, gas, water, electricity and food to take care of their employees.

Taiwan epidemiologist Ho Mei-hsiang said the lockdown would have to lift eventually, which would give rise to a larger wave of infections.

“Even if they’re successful [in getting to zero] after 20 or 28 days, the question is what happens next?” Ho said. “There is still a bunch of virus circulating outside [Shanghai]. The next time the virus comes in, will they lock down again?”

“As long as the virus exists in the world, completing the first three doses of vaccine should be the top priority, not lockdowns,” Ho said.