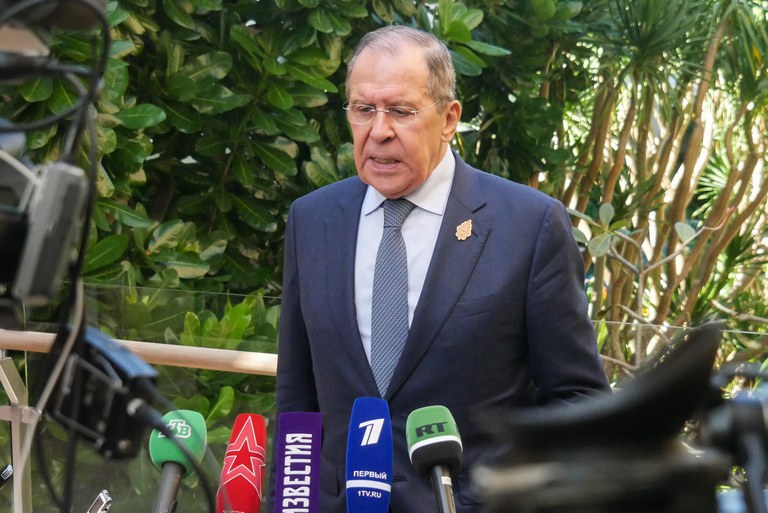 The G20 foreign ministers’ meeting in Bali concluded Friday with several nations’ top diplomats condemning Moscow’s war in Ukraine in the presence of their Russian counterpart, who walked out at least once during what he called the “frenzied castigation.”

Retno Marsudi, the chief diplomat of host country Indonesia, did not say whether the meeting reached any consensus about food security, but mentioned that participants were deeply concerned about the conflict’s “global impact on food, energy and finance.”

Some of the Group of Twenty members “expressed condemnation” of Russia’s invasion of Ukraine, she said, adding, “It is our responsibility to end the war as quickly as possible. And to build bridges and not walls.”

“Developing countries will be the most affected, particularly low-income countries and small, developing countries. There is an urgent need to address global food supply chain disruptions, integrating food and fertilizer from Ukraine and Russia into the global market,” Rento said in a statement after the meeting.

Since Russia invaded the neighboring country on Feb. 24, its military forces have blocked all of Ukraine’s Black Sea ports and cut off access to almost all of that country’s exports – especially of grain – sparking fears of a global food crisis. Ukraine is the world’s fourth-largest grain exporter.

Before the meeting started, Sergey Lavrov, Russia’s foreign minister, had to deal with tough questions from at least one reporter.

“When will you stop the war?” a German journalist asked as Moscow’s top diplomat shook hands with Retno.

Lavrov did not respond and walked away.

At the ministers’ meeting, Lavrov, sat between representatives from Saudi Arabia and Mexico. He later told reporters that during the meeting, he accused the West of preventing a peaceful solution to the conflict in Ukraine by refusing to talk to Russia.

“If the West doesn’t want talks to take place but wishes for Ukraine to defeat Russia on the battlefield – because both views have been expressed – then perhaps, there is nothing to talk about with the West,” TASS, the Russian state news agency, quoted him as saying.

Asked if there was any chance that he and Blinken could talk, he said: “It was not us that abandoned all contact. It was the United States.”

“If they don’t want to talk, it’s their choice,” Lavrov added.

Before the U.S. diplomat left for Bali, U.S. State Department officials said that he would not meet Lavrov formally until the Russians were “serious about diplomacy.”

But the Reuters news agency quoted Indonesia’s Retno as saying that Lavrov and Blinken were seen in a conversation in the meeting room.

Additionally, Blinken is said to have responded to Lavrov’s accusations against the West, Reuters said, citing an unnamed diplomat, who added, though, that Lavrov wasn’t in the room at that time.

“He addressed Russia directly, saying: To our Russian colleagues: Ukraine is not your country. Its grain is not your grain. Why are you blocking the ports? You should let the grain out,’” the official said, according to Reuters.

The meeting on Friday occurred under the shadow of the assassination of former Japanese Prime Minister Shinzo Abe during an election campaign speech in Nara, Japan. In a message of condolence to the Japanese people, Retno said Abe would “be remembered as the best role model for all.”

‘Everyone has to feel comfortable’

After the meeting, Lavrov and his German counterpart traded barbs.

German Foreign Minister Annalena Baerbock criticized Lavrov for being absent from the meeting room, according to German news agency DPA.

“The fact that the Russian foreign minister spent a large part of the negotiations here not in the room but outside the room underlines that there is not even a millimeter of willingness to talk on the part of the Russian government at the moment,” DPA quoted Baerbock as saying.

She noted that Lavrov was not present at discussions on how to improve global food supply and distribution problems.

For his part, Lavrov questioned Western manners when informing reporters that G7 diplomats had skipped a welcome dinner organized by Indonesia on Thursday, TASS reported.

“A welcome reception organized by Indonesia was held yesterday, a reception and a concert, and they [G7 countries] were absent from it,” Lavrov said.

“This is how they understand protocol, politeness and code of conduct,” he added.

“We are trying to create a comfortable situation for all. When the G7 countries said they could not attend the optional informal reception, they all talked and I said I could understand the situation because once again, everyone has to feel comfortable,” Retno said.

Indonesia has been trying to mediate between Russia and Ukraine, with President Joko “Jokowi” Widodo visiting the two countries last month on a trip he described as a peace mission.

While his mission to persuade Moscow to declare a ceasefire did not immediately materialize, Jokowi said that Russian President Vladimir Putin had promised he would secure safe sea passage of grain and fertilizers from the world’s breadbaskets Russia and Ukraine, to avert a global food crisis.