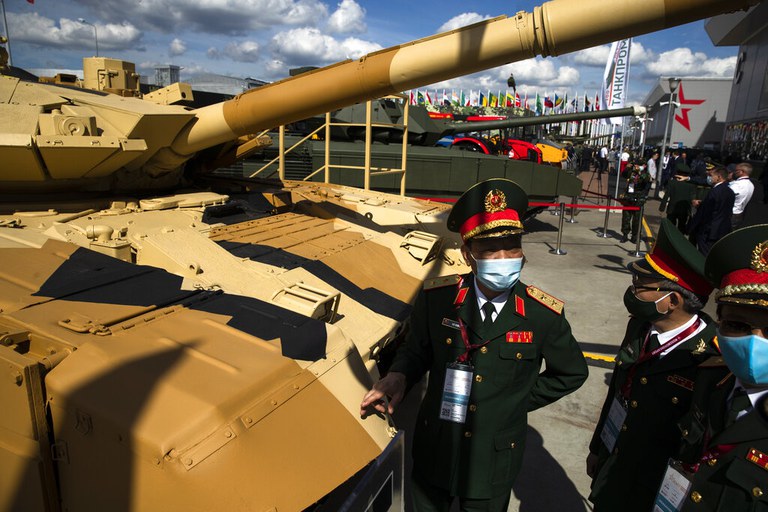 Russia’s arms sales to Southeast Asia have plummeted due to international sanctions imposed since the start of the Ukraine crisis in 2014 and the ongoing war will likely lead to a further decline, creating market opportunities for countries like China, a new report says.

An article in the bulletin ISEAS Perspective published by the ISEAS –Yusof Ishak Institute, a Singapore-based research institution, has found that Russia’s defense industry has been hit hard, with export values reduced from $1.2 billion in 2014 to just $89 million in 2021.

Cumulatively Russia has been on top of the list of arms suppliers to Southeast Asia over the last two decades but the sales are likely to fall further and regional countries will look to divert their weapons contracts to other countries, the report says.

Data provided by the Stockholm International Peace Research Institute (SIPRI) show that in 2021 alone, Russia has already slipped behind the United States and China.

According to the article’s author, academic Ian Storey, the biggest reason behind the fall is sanctions and export controls that the U.S. and Europe imposed on Russia’s defense industry since its annexation of Crimea from Ukraine in 2014. Those restrictions haven’t necessarily prevented Southeast Asian nations from buying Russian arms, but there is less on offer as Russian manufacturers face difficulties in conducting financial transactions and accessing technologies and critical components.

“The conflict brought to an abrupt end longstanding and extensive cooperation between Ukrainian and Russian defense companies, especially in the production of engines for surface ships, helicopters and aircraft,” Storey said.

Another factor is a pause in the military modernization program in Vietnam, Russia’s biggest customer in Southeast Asia. Hanoi began the program in the late 1990s and in the period 1995-2021, it bought $7.4 billion worth of weapons and military equipment from Russia. That accounted for more than 80 percent of Vietnam’s total arms imports.

“Vietnam has put the military modernization program on hold because of concerns over Moscow’s ability to fulfill orders but also due to an anti-corruption drive,” Nguyen The Phuong, lecturer at the Faculty of International Relations, Ho Chi Minh City University of Economics and Finance, wrote in July 2021 research paper.

Hanoi will still have to rely on Moscow to maintain and operate its Russian-made arsenal of six Kilo-class submarines, 36 Sukhoi Su-30MK2 aircraft, four Gepard 3.9 class frigates and two Bastion mobile coastal defense missile systems, but experts say it has already been on the look-out for alternative supply sources including Israel, Belarus, the U.S. and the Netherlands.

In the light of the Ukraine war, the new report says will be difficult for Russia’s defense manufacturers to revive their sales due to “the imposition of tighter sanctions and export controls by a number of countries, the reputational damage caused by the poor performance of Russia’s armed forces in Ukraine, and its need to replenish battlefield losses.”

Storey pointed out that the current sanctions on Russian banks, and their exclusion from the Society for Worldwide Interbank Financial Telecommunication (SWIFT) international payment network, “will make it harder for the country’s defense industry to conduct financial transactions with overseas clients.”

“As a consequence, foreign buyers may decide to switch to more reliable sources of military hardware.”

Furthermore, losses suffered by Russian forces in Ukraine this year may have seriously damaged Moscow’s reputation as a military equipment powerhouse.

“The problems facing Russia’s defense-industrial sector will create market opportunities in Southeast Asia for other countries, including China,” the report says.

So far, China has refrained from condemning Russia’s invasion of Ukraine, and as the war drags on Moscow’s dependence on Beijing may deepen.

In return, “China will seek increased access to Russia’s most sensitive military technology and even pressure Moscow to reduce military sales to Vietnam,” Storey said.

That would be a blow for Russian exporters but also for Vietnam, which has competing claims against China in the South China Sea.

The situation in Ukraine also disrupted the Ukrainian arms supply to Hanoi which totaled $200 million during 2000-2021.

Ukraine was part of the Soviet and then Russian defense industries even after proclaiming independence. It has been a major supplier of aircraft and spare parts, as well as armored vehicles and munitions.

During 2009-2014, up until the annexation of Crimea, Ukraine was among world’s 10 largest arms exporters, according to SIPRI.

In 2012, it was in fact the fourth-largest arms exporter. Kyiv sold $1.3 billion worth of conventional arms that year. Ukraine’s state-owned exporter Ukrspecexport had contracts with nearly 80 countries.

In its heyday, the company ran 100 arms-producing plants and factories, and employed tens of thousands of workers.

Besides Vietnam, in Southeast Asia Thailand and Myanmar were also big customers that spent $479 million and $111 million on Ukrainian weapons respectively during 2000-2021.

In 2011, Bangkok ordered 49 T-84 Oplot battle tanks and 236 BTR-3E armored vehicles from Ukraine. However the delayed deliveries of the Oplots due to the Crimea crisis forced Thailand to buy VT-4 main battle tanks from China instead.

Bangladesh, Cambodia, Laos and Indonesia also bought weapons from Ukraine, though in much lesser quantities.

“Many of the spare parts of the helicopters and planes are produced in Ukraine. The import of such spare parts and military hardware would now be stopped,” Hossain said.

Another former Bangladesh serviceman, Air Commodore (Rtd) Ishfaq Ilahi Choudhury, said that the war in Ukraine would not create any problem in operating the aircraft in the short term.

“But in the long run we may face problems as the Russian forces attacked the Antonov plant,” he said.

BenarNews journalists Kamran Reza Chowdhury in Dhaka and Pimuk Rakkanam in Bangkok contributed to this report.