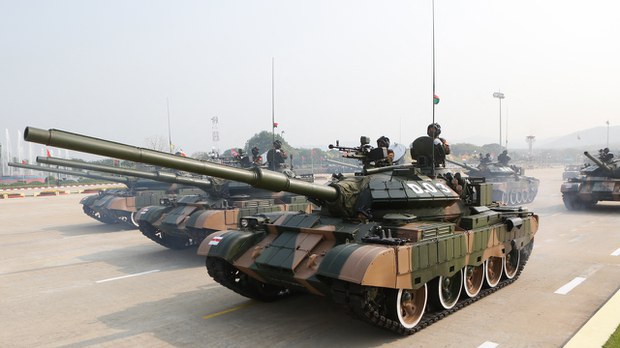 A reward program offered by Myanmar’s shadow National Unity Government (NUG) to junta soldiers who defect with jets, helicopters and other vehicles is likely to test the loyalty of the military’s lower ranks, according to former servicemen.

Earlier this month, the NUG announced that it was offering cash rewards of up to U.S. $300,000 equivalent to any soldier who destroys an army, navy or air force assault vehicle or aircraft, or up to U.S. $500,000 to anyone who defects to the opposition along with one.

Naing Htoo Aung, the permanent secretary of NUG’s Defense Ministry, said at the time that the rewards program is intended to provide “guarantees in life” for those soldiers who turn against the junta.

“We have learned that there are many soldiers who want to defect from their units and join the people’s forces,” he said, adding that the military vehicles are being used to “attack the public.”

“We hope this announcement will encourage them to defect more. We believe the rate of defection will increase every day.”

Capt. Kaung Thu Win, a military officer who joined the anti-junta Civil Disobedience Movement (CDM), agreed that rank and file soldiers are likely to jump at such an opportunity, although he acknowledged that it would be difficult for them to abscond with the vehicles intact.

“It could be challenging to bring aircraft or fighter jets to another location. For example, fighter jets need a [special] landing strip. The helicopters are also limited in their range, depending on their capacity. Even tanks are difficult to take long distances,” he told RFA.

“It is more realistic to expect them to destroy them. And they should only receive the rewards if they can show evidence that they have destroyed the vehicles and defected.”

According to the NUG announcement, soldiers are eligible for cash rewards equal to U.S. $100,000 for destroying fighter jet fuel tanks, as well as weapon factories and storage facilities.

Thein Tun Oo, executive director of the Thayninga Institute of Strategic Studies, a group of former military officers from Myanmar, called the offer impractical and unrealistic.

“There are several measures in place that make it difficult to steal military vehicles, let alone destroy them. There are hierarchies of command that monitor the members of each unit,” he told RFA.

“To be frank, this announcement is just for propaganda purposes. When the opposition forces take up arms to fight, they will do anything to defeat the enemy, regardless of whether it is right or wrong. As for whether these tactics will work or not, it depends on their purpose and the impact they have.”

Capt. Lin Htet Aung said that regardless of its impact on the outcome of the conflict, the NUG’s reward offer will cause soldiers from all levels of the military to question their loyalty to the junta.

“This announcement could stir up the members of elite forces. Those who are operating the vehicles will have thoughts to consider. It will also stir up distrust among the members of the military,” he said.

“The military is already facing a moral crisis and losing loyalty among its members. The top ranking officers will strictly punish any infraction that occurs after this announcement.”

According to Pyithu Yinkwin (People’s Embrace), a group of CDM members made up of former military personnel, nearly 3,000 soldiers have joined the CDM since the Feb. 1, 2021, coup that saw the junta seize power from the democratically elected National League for Democracy (NLD) party.

In a recent interview, NUG Defense Minister Yee Mon told RFA that the announcement of the rewards program was justified under Myanmar’s Public Property Act of 1947, which prevents against the “misuse of public property.”

“The junta is currently misusing military facilities, which are public property, to wage violence against and kill the people,” he said, adding that the president of a new civilian government would put new laws into place to ensure such violations do not happen again.

Yee Mon responded to critics who doubt the feasibility of NUG’s announcement by noting that “helicopters don’t need landing strips,” and suggesting “airports will be under PDF control sooner or later” to accommodate any stolen fighter jets.

In the meantime, opposition forces — comprised largely of People’s Defense Force (PDF) paramilitaries — are being armed with “factory-made standard arms and IEDs that we made ourselves,” as well as weapons bought using a budget of U.S. $34 million, and others seized from junta troops.

“We have enough weapons to meet the minimum requirements for the PDF forces,” he said, without providing further details.

Yee Mon said that the armed opposition now numbers “between 50,000 and 100,000” soldiers from the PDF and other allied anti-junta groups formed into 259 military battalions, as well as fighting units based in 250 townships across the country. RFA was unable to independently verify the minister’s claims.

“The majority of these groups are working with NUG … and we are ready to defeat the military junta,” he said. “Now we are working on the next step in terms of surrounding and controlling some towns.

The defense minister said that the NUG has no plans to negotiate with the junta, “as long as it upholds an authoritarian system and mindset.”

“With regards to the future of the military, which is under its control, it is up to their soldiers to decide,” he said. “They can choose either to completely disband the military or reform it into forces that comply with the command of a civilian government. If the latter, the window for negotiations remains open.”