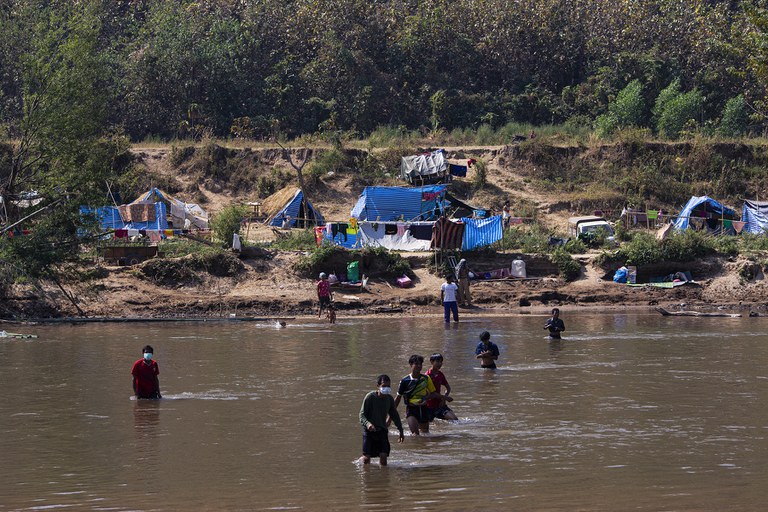 Thailand should allow delivery of cross-border humanitarian aid into Myanmar and not push back people seeking refuge from threats to their life and freedom in that country, a U.S.-based NGO is urging in a new report.

Thousands of Burmese have crossed into Thailand along the porous 2,400-km (1,500-mile) frontier to flee the conflict in the wake of a military coup that toppled an elected civilian-led government and installed a junta in Naypyidaw early last year.

“The military junta has committed widespread atrocities and blocked international humanitarian groups from delivering aid to areas that desperately need it,” Refugees International, a Washington-based group, said in its report released Tuesday.

“In the meantime, delivery of international aid through Myanmar’s neighbors, particularly through local groups active along the Thai-Myanmar border, presents an underutilized path for getting assistance to those in need.”

The report comes two days after U.S. Secretary of State Antony Blinken, during a visit to Bangkok, urged Thailand, other members of the Association of Southeast Asian Nations (ASEAN) and China to press the Burmese junta into ending violence against Myanmar’s people and moving that country back toward democracy.

Led by Senior Gen. Min Aung Hlaing, Myanmar’s military toppled the democratically elected government in February 2021 and has thrown its civilian leaders in jail. Fighting between junta forces and opposition groups across the country has forced mass displacement amid growing humanitarian needs.

“Thai authorities must also live up to their commitments to non-refoulement and refrain from pressuring people fleeing violence in Myanmar from returning before it is safe to do so,” Refugees International said.

Thailand, long considered a linchpin in relations between ASEAN and member-state Myanmar, has been criticized as being relatively soft on the post-coup crisis that has divided the 10-member regional bloc.

“Thailand is reluctant to do anything to incentivize more refugees coming into the country, but failure to allow cross-border aid – and thus allowing conditions for people across the border to deteriorate – could do just that,” Refugees International said.

During the fighting inside Myanmar, the junta’s forces have detained more than 14,000 people, while more than 2,000 civilians have been killed, according to Thailand’s Assistance Association for Political Prisoners.

About 1.1 million people have been displaced in Myanmar, including 758,500 forced to flee their homes as of June 20, according to the United Nations High Commissioner for Refugees (UNHCR). An estimated 14.4 million people, or a quarter of the country’s population, need humanitarian assistance due to the conflict.

In recent months, the most intense fighting has occurred in Chin, Sagaing and Magway states in northwestern Myanmar and in Karen and Karenni states in the southeast that borders Thailand.

Junta forces have burned thousands of homes while fighting and airstrikes have caused more than 500,000 to flee their homes, said the U.N. Office for the Coordination of Humanitarian Affairs (OCHA).

For its part, Thailand has restricted cross-border aid, Refugees International said in the report, adding that the Burmese junta controls main roads and has allegedly seized or destroyed aid while attacking humanitarian workers.

Similarly, Refugees International said, Myanmar’s rugged terrain limits informal aid for thousands who need humanitarian assistance in the interim and those living in areas not under junta control.

Thailand-linked cross-border organizations have been providing some aid to residents in Karen and Karenni states. These groups have been operating since the 1990s when ethnic armed groups were fighting the Myanmar military.

One of the Thai government’s main challenges in delivering aid across the border is Bangkok’s concern with its relationship with the junta, Refugees International said, alleging that officials are “seeking to balance economic and security interests” by refusing cross-border aid officially.

The NGO called on the Thai and other governments to get involved.

The “largest and most consistent barrier” to humanitarian assistance is the lack of funding, it said.

“While a few governments are supporting local groups involved in aid efforts, donor countries should step up support for these underutilized and low-profile mechanisms,” it said.

Because the report by Refugees International was embargoed for publication until Tuesday afternoon (Bangkok time), BenarNews could not immediately reach Thai officials to get a response.

Refugees International also said Thailand should provide protection and rights to thousands of people who have crossed the border from Myanmar to seek temporary or long-term refuge since the coup.

Salai Bawi, a research fellow at Chiang Mai University, said the Thai government had not taken the call for aid seriously because Thai people do not see the need to help the refugees as urgent.

“For decades, the Thai government left the burden and responsibility of Myanmar refugees to international organizations, while it remained just a facilitator,” he told BenarNews.

In the past, Thai authorities stressed that they had not forced refugees to return, adding that many had chosen to go back to Myanmar.  Local media, NGOs and human rights activists, on the other hand, have alleged that Thai authorities pressure displaced Myanmar people into returning to their country, Refugees International said.

As of February 2022, the Thai government estimated that 17,000 Myanmar refugees had crossed into Thailand since the coup, but according to a report published by UNHCR in June, only 246 refugees remain in two Thai military-controlled sites where conditions are reported to be deplorable.