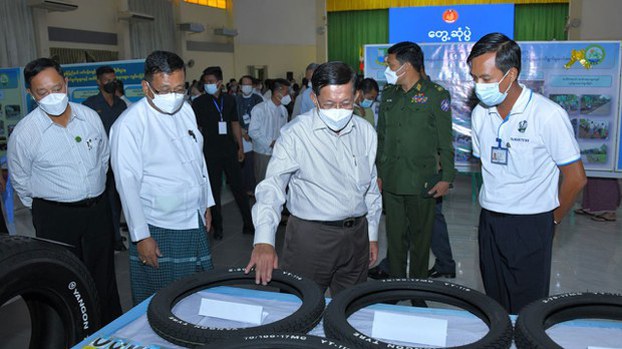 An anti-junta group claimed responsibility for bomb blasts at a colonial-era prison in Myanmar’s commercial hub Yangon on Wednesday morning that killed eight people and injured 18 others.

The Special Task Agency of Burma, an urban rebel group fighting the military dictatorship, announced that it had carried out the attack in which two bombs in parcel packages exploded at Yangon’s notorious Insein Prison. The blasts occurred near an area for receiving packages delivered by the family members of political detainees and were followed by gunfire by junta soldiers.

The blasts were the latest attack by groups seeking to remove the junta from power following a February 2021 coup in which the military seized control of the democratically elected government. Security forces have fired on and used excessive force to disperse and harm protesters in their widespread assault on civilians who oppose the regime. Local People’s Defense Force, or PDF, militias have teamed up with ethnic armies to fight the junta forces.

To date, more than 2,370 civilians have been killed and 15,901 arrested since the coup took place, according to figures from the Assistance Association of Political Prisoners, a human rights group founded by Burmese former political prisoners living in exile in Thailand.

Myanmar’s shadow National Unity Government, the Yangon-based anti-junta protest group General Strike Committee and other activist groups condemned the attacks and called for those responsible to be held to account.

“Whoever did this must be held accountable,” said Kyaw Zaw, a spokesman for the NUG’s Presidential Office, told RFA. “It is completely unacceptable for the family members of political prisoners to set off bombs in the prison while they are in prison. Civilians should not be targeted for any attacks at all.”

“They were returning from Mawlamyine, [and] we attacked with landmines followed by a direct assault when they arrived in the Bilin area,” said a Thaton PDF battalion commander who declined to be identified for security reasons.

San Myint, spokesman for Thaton KNLA Battalion No. 2, said the forces targeted the vehicles carrying high-ranking officers, killing nine junta soldiers at the scene and injuring two others who died at a hospital.

But Aung Kyi Thein, the junta’s spokesman for Mon state and minister of natural resources and environmental conservation, said only two people died. He said rebels attacked the convoy by detonating handmade landmines and shot 40-millimeter missiles and small arms at the vehicles at the former Shwe Than Lwin toll gate.

RFA has not been able to independently establish the number of casualties.

A resident who lives near the area where the attack took place told RFA that locals frequently hear battle sounds and fear for their safety. Other residents said battles break out often between the junta and Karen rebels in the Bilin area and that some civilian adults and children have died as a result.

“I am praying that the battles will not move to our location because many of us work on rubber and betel nut plantations, and we have to go into the woods a lot,” said one resident who requested anonymity for safety reasons. “We are too scared to go there. It’s also dangerous to pass between Thaton and Bilin in the evening from 6 p.m. or 7 p.m. The situation is too risky even to go onto the betel plantation.”