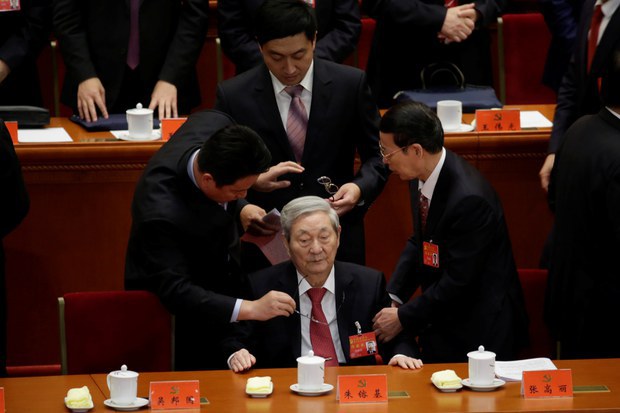 Hundreds of students protested at the weekend on the campus of Peking University (Beida) after a fence was put in place segregating them from the rest of the university, which continues to move around freely.

The protest comes as ruling Chinese Communist Party (CCP) leader Xi Jinping seeks to eliminate public dissent, especially criticism his flagship zero-COVID policy, ahead of the 20th party congress later this year, when he will seek an unprecedented third term in office.

In a video clip sent to RFA, Beida party secretary Chen Baojian appealed to the students to disperse, and photos shown by RFA showed part of the fence on the ground. It was unclear who had dismantled it.

“Please go back to your dormitory in an orderly manner,” Chen tells the students by loudspeaker. “If anyone, any student has an opinion tonight, we can talk about it.”

Shortly afterwards, the sound of something metallic falling to the ground is heard, and students applaud.

Chen then appears to take issue with students filming the standoff on their phones.

“Classmates … please put down your mobile phones to protect Peking University,” he said.

Political commentator Ji Feng said the thing that has angered students the most is that the restrictions only apply to them, and not to faculty or staff at the university.

“They have sent me things which show that students and faculty used to come and go by the same door, and all mixed together, but now they want to segregate them,” Ji told RFA.

“They can’t enforce restrictions on Beida faculty, because they live in the same blocks as the middle-ranking cadres and university leaders,” he said. “They’re not going to impose lockdown on themselves.”

“So faculty are allowed in, but the students aren’t; they’re all being fenced off in their dormitories,” Ji said. “That’s why the students were protesting.”

Chen Baojian was appointed to his position as deputy vice chancellor and party secretary in February, with responsibility for the student body, the CCP Youth League and health and security matters, sources told RFA.

“He is worried that the students … will spread the virus, as if faculty wouldn’t,” Ji said. “There hasn’t been a large-scale student protest in Beijing for many years.”

“If they don’t deal well with this, they could wind up starting one.”

The protest at a university will be highly sensitive for China’s political elite.

Sun Fugui, who was expelled from Shandong’s Ludong University for opposing zero-COVID measures there, said Beida has a reputation for political struggle.

“Students at [these famous schools] have a broader perspective [and will be asking] if there is any scientific basis for these disease control and prevention measures,” Sun said.

“If there are any violations of their personal rights and interests, they will fight back for them. They have a stronger sense of citizenship and rights protection than regular college students, that’s for sure,” he said.

“Peking University students have this spirit, this tradition in their blood,” he said. “Other Chinese colleges and universities look to Beida, and look to Tsinghua [University].”

An anonymous Beida student commented online: “With this … incident, we are witnessing the resurgence of the tradition of political struggle among Beida students.”

Online comments also said staff had been calling on students to report each other to the authorities for attending the protest, and hand over their footage or photos as evidence.

The protest came as the CCP called on retired party elders to keep quiet on topics where they disagree with Xi, possibly in response to reported criticisms made by a former premier.

In a possible response to reported comments from former Chinese premier Zhu Rongji about Xi’s bid to serve a third term in office, party mouthpiece the People’s Daily called on retired leaders “not to make arbitrary comments about key policies of the Central Committee.”

The article, titled “Opinion on strengthening party building among retired cadres in the new era,” said party committees at all levels should call retired members in for lectures, adding that overseas retirees should “strictly adhere to the relevant regulations.”

The Wall Street Journal reported in March that Zhu, 94, was unhappy with Xi’s bid for a third term in office, when leaders since Mao Zedong have been limited to two terms apiece.

The paper said many in the CCP including former Premier Zhu Rongji have recently voiced their opposition to Xi Jinping’s move to break the established party system of leadership succession and plan to be re-elected this year.

Citing CCP sources, the paper said that the left-leaning economic reforms spearheaded by Xi will also likely be postponed due to opposition within party ranks, amid an economic slowdown sparked by the zero-COVID policy.

The new campaign targeting retired CCP cadres will require them to “stand firm in the face of major right and wrong, to be loyal to the party, to obey the party’s commands [and] to act responsibly with regard to the party,” the People’s Daily article said.