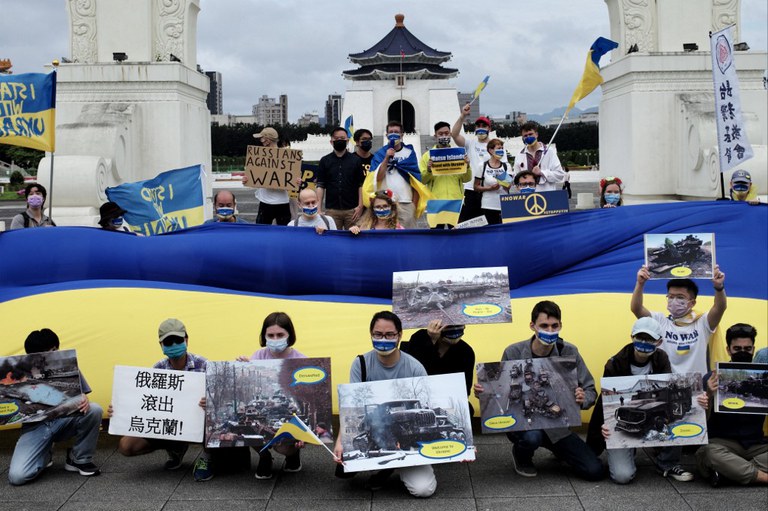 U.S. President Joe Biden warned on Monday that China is ‘flirting with danger’ with its ongoing threat to annex democratic Taiwan, saying the U.S. is “committed” to defending the island in the event of a Chinese invasion.

Speaking during a visit to Tokyo, Biden was asked if Washington was willing to get involved militarily to defend Taiwan, replying: “Yes. That’s the commitment we made.”

Biden said such an invasion would mirror Russia’s invasion of Ukraine.

“We agreed with the One China policy, we signed on to it… but the idea that it can be taken by force is just not appropriate, it would dislocate the entire region and would be another action similar to Ukraine,” Biden said.

Biden warned that Beijing was “flirting with danger right now by flying so close and all the maneuvers undertaken,” in a reference to repeated sorties flown by China’s People’s Liberation Army (PLA) jets in the island’s Air Defense Exclusion Zone (ADIZ), as well as naval exercises and other displays of strength in the Taiwan Strait.

In a joint statement, Biden and Japanese Prime Minister Fumio Kishida said that their basic positions on Taiwan remained unchanged.

While Washington lacks formal diplomatic ties with Taipei, it is bound under the Taiwan Relations Act (TRA) to ensure the island has the means to defend itself, and to be prepared to “resist any resort to force … that would jeopardize the security, or the social or economic system, of the people on Taiwan,” the law says.

‘No room for compromise’

The law says that the U.S. should also resist “any effort to determine the future of Taiwan by other than peaceful means, including by boycotts or embargoes.”

Chinese foreign ministry spokesman Wang Wenbin hit back, warning that “no one should underestimate the firm resolve, staunch will and strong ability of the Chinese people in defending national sovereignty and territorial integrity.”

“China has no room for compromise or concession,” Wang told a regular news briefing in Beijing.

“The Ministry of Foreign Affairs welcomes and expresses its sincerest thanks for the reiteration by President Biden and the U.S. government of its rock-solid commitment to Taiwan,” Ou said.

She said Taiwan will continue to boost its own capability to defend itself against a potential invasion, and deepen cooperation with like-minded countries like the U.S. and Japan to strengthen regional stability.

Ding Shu-Fan, honorary professor at Taiwan’s National Chengchi University, said Biden’s statement was of a piece with an earlier promise from former president George W. Bush in 2001, who said Washington would do “whatever it takes” to defend Taiwan from a Chinese attack.

Alexander Huang, international affairs director at Taiwan’s opposition Kuomintang, also welcomed Biden’s comments, but said it was unlikely they represented a departure from the “strategic ambiguity” practiced by Washington for decades in a bid to prevent either a Chinese invasion or a formal declaration of independence from Taiwan.

“President Biden’s comments came as he took questions from reporters,” Huang said. “When the U.S. wants to revise its current policy of strategic ambiguity and take a publicly known stance, or change its policies on China or Taiwan, it is unlikely to do it at this kind of function.”

Su Tse-yun, an associate researcher at Taiwan’s Institute for National Defense and Security Research, told this station that countries in the Asia-Pacific region have started to need more clarity, and with a greater sense of urgency, on Washington’s likely strategy in the wake of the Russian invasion of Ukraine.

“In this context, Biden’s announcement is constructive, clear, and unwavering,” Su told RFA.

Taiwan is a democratic country governed under the aegis of the Republic of China founded by Sun Yat-sen in 1911. Its government has controlled the islands of Taiwan, Penghu, Kinmen and Matsu since Chiang Kai-shek’s KMT regime lost the civil war to Mao Zedong’s communists in 1949.

Taiwan issues Republic of China passports to its 23 million citizens, who have never been ruled by the Chinese Communist Party (CCP), and who have no wish to give up their democratic way of life for “unification” under Beijing’s plan, according to opinion polls in recent years.

Beijing, for its part, insists that its diplomatic partners sever ties with Taipei, and has blocked the country’s membership in international organizations like the United Nations and the World Health Organization (WHO).