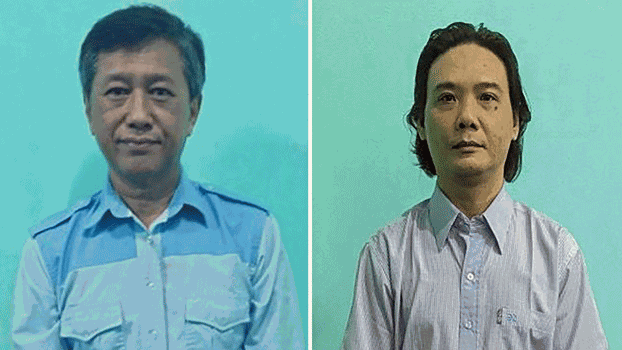 As talk that Myanmar’s junta was set to hang veteran democracy activist Ko Jimmy and three other men went viral on social media Thursday, other junta opponents and analysts said carrying out the executions would backfire against the military regime that has ruled the country since a coup last year.

The rumored executions at dawn Thursday did not take place, but critics said carrying out death penalties handed down after brief, closed trials on terrorism charges would bring more international opprobrium and galvanize domestic opposition against the unpopular junta.

“There will be calls for more pressure against the junta in the international arena, and the junta will find it more difficult to impose their rule on young people across the country,” Aung Moe Zaw, chairman of the Democratic Party for New Society, told RFA.

“I think more people will be out on the streets,” he added.

On June 3, Ko Jimmy, lawmaker Phyo Zeyar Thaw of the National League for Democracy party that was banned after the military overthrew the country’s elected government on Feb. 1, 2021, and two other men lost appeals of their death sentences. The junta rejected the possibility of a pardon for the condemned men.

Ko Jimmy, whose real name is Kyaw Min Yu, was a prominent leader of the pro-democracy 88 Generation Students Group who fought military rule three decades ago.

The 53-year-old activist was arrested in October after spending eight months in hiding and was convicted by a military tribunal in January under the Counter-Terrorism Law. He was accused of contacting the National Unity Government (NUG), and People’s Defense Force (PDF), an opposition coalition and militia network formed by politicians ousted in the Feb. 1 coup that the junta has declared terrorist organizations.

In September, the NUG declared a nationwide state of emergency and called for open rebellion against junta rule, prompting an escalation of attacks on military targets by various allied pro-democracy militias and ethnic armed groups.

Ko Jimmy was also accused of advising local militia groups in Yangon and ordering PDF groups to attack police, military targets, and government offices, and asking the NUG to buy a 3D printer to produce weapons for local PDFs.

The four death sentences, as well 111 others that have been handed down by junta courts between the military’s 2021 coup and May 19 this year, have drawn criticism from legal experts and rights groups, who say the regime is threatening the public with unfair executions.

The United Nations, Washington, Ottawa, and Paris have issued statements strongly condemning the decisions in the cases now proceeding to execution.

An appeal against carrying out what would be the first judicial execution in Myanmar since 1988 came from Cambodian Prime Minister Hun Sen, who wrote junta leader Sen. Gen. Min Aung Hlaing on June 10, urging him to “reconsider the sentences and refrain from carrying out the death sentences.”

If carried out, the executions “would trigger a very strong and widespread negative reaction from the international community” and hurt efforts to find a peaceful solution to the crisis in Myanmar, wrote Hun Sen, in his capacity as 2022 rotating chair of the Association of Southeast Asian Nations (ASEAN), of which Myanmar is a member.

Thiha Win Tin, a former member of the All Burma Federation of Students’ Unions,

Said plans to execute the four would spark an angry reaction from many quarters of society which don’t accept the legitimacy of the junta or the military tribunals that meted out the death penalty.

“This is not a death penalty. They were simply arrested and ordered to be killed,” he said.

“It’s not just Phyo Zeyar Thaw and Ko Jimmy. Many of our comrades have been killed during interrogations, some killed on the streets–unarmed and peaceful protesters arrested late in the night,” added Thiha Win Tin.

Hatred of army will grow

Mar Kee (also known as Kyaw Kyaw Htwe), a political ally of Ko Jimmy since the 1980s, said “the consequences will not be good” if the executions were carried out.

“There were people in the country who accepted Jimmy and Zeyar Thaw and their work, and there were those who didn’t. Even those who didn’t accept them, as well as those in the middle, would be outraged if the death penalty were to be imposed on people for their political beliefs,” he told RFA.

“I think the hatred against [the army] will grow.”

Local anti-junta PDFs groups and other regime opponents have issued a series of warnings in recent days that they would retaliate if Ko Jimmy, Phyo Zeyar Thaw and the others were put to death.

Military spokesman Maj. Gen. Zaw Min Tun, at a conference in Naypyidaw Thursday, defended the planned executions as a necessary measure by a sovereign country, but did not say when they would take place.

“Innocent people lost their lives because of these two’s encouragement [of anti-junta militias],” he said. “I just said innocent people. I am not talking about security personnel.”

“At least 50 lives were lost thanks to their support. So how can you say it’s not fair?” said Zaw Min Tun.

The junta has not provided evidence to support the allegations, and the spokesman did not elaborate.

The Assistance Association for Political Prisoners (AAPP), a Thai-based advocacy group, said that 1,958 people have been killed and 14,139 anti-regime activists across the country have been arrested in more than 16 months since the military coup. Of those, 11,081 are still in custody.

Political analyst Sai Kyi Zin Soe said no one in Myanmar would believe in the multi-party elections the military has promised to hold in 2023 if the executions were carried out.

“When the elections are held in 2023, these guys, who were supposed to be contesting the elections but have been executed unfairly, would be absent,” he told RFA.

“People will ask how this election could be fair when those who have the right to take part in the elections have been executed. And how are they going to explain? They will never be able to justify it,” said Sai Kyi Zin Soe.