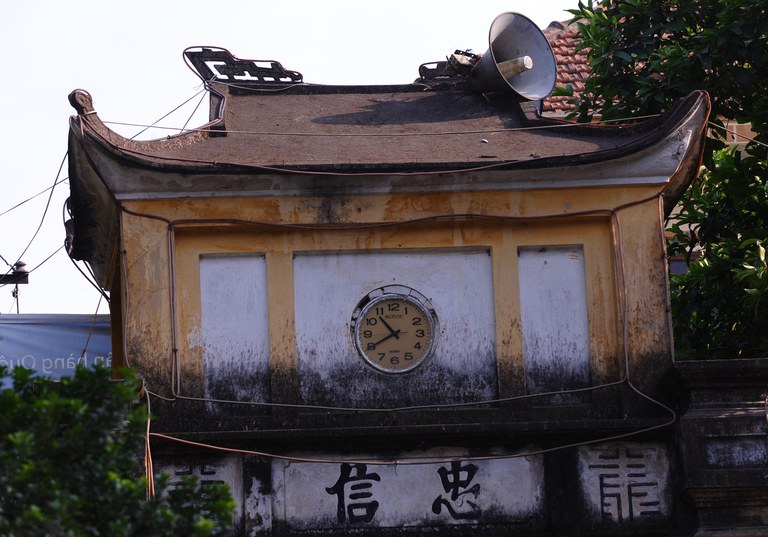 Authorities in Hanoi announced recently that the once-ubiquitous loudspeakers, a staple of government news and propaganda, relics of the past and left to disrepair in the early 2000s, would be reinstalled.

The late July announcement caught everyone by surprise and has been met with derision. But it speaks volumes about the Communist regime, its insecurities, and the pathways to power.

For a government which has touted a high-tech future for Vietnam under its “National Strategy for the Fourth Industrial Revolution,” the Orwellian monotone does not seem to be a sophisticated way of communication.

Why a media anachronism in a time when people have alternative sources of information across multiple platforms on their smartphones?

On the simplest level, it’s just that, an attempt by the Party to harken back to a time when the state easily monopolized the information environment.

According to international watchdogs, Vietnam has one of the most repressive media environments in the world. Reporters Without Borders ranks it 174. The Committee to Protect Journalists documented 23 arrested journalists in 2021. Freedom House rated its internet freedom at 22 out of 100 – just above worst-ranked Iran, Myanmar and Cuba.

Yet despite the concerted efforts to police and censor the internet, the media landscape is more open than one would expect. Vietnam’s internet is not behind a firewall, and there are 76 million Facebook users in Vietnam. Authorities can only focus on the key nodes and influencers.

The Vietnamese government’s cyber security law, adopted in 2019, potentially compels data localization from the big tech companies, though policy disputes between the Ministry of Public Security and the economic ministries have meant that it’s not been fully implemented. Nonetheless, according to data reported by Vietnamese authorities, foreign social media firms complied with around 90 percent of government requests to take down media across social media platforms.

Hanoi is demanding and getting more corporate compliance in dealing with “malicious content.” And yet, for many in the Vietnam Communist Party (VCP), the media landscape is still too permissive.

A pervasive sense of insecurity

The re-installation of the loudspeakers also reflects a deep insecurity on the part of the government. And it has much to be insecure about.

The VCP’s claim to legitimacy is based on two things: nationalism and economic performance. Recently both have been in called into question due to endemic corruption that has reached the highest levels of government.

Despite unflinching Chinese pressure and excessive maritime claims against Vietnam’s national sovereignty, the Coast Guard is mired in corruption. The commander and his predecessor were both sentenced to 17 years in prison for using state assets to protect oil smugglers. The party expelled two other major generals, and disciplined five other major generals and two lieutenant generals.

The government will have a very attentive public to respond to the next time the Coast Guard is caught flat-footed against Chinese incursions. Corruption undermines combat readiness.

Two other corruption scandals, both involving the until-then stellar COVID-19 response by the previous government, have hit the senior-most leadership and called into question the prime minister’s management.

A scandal over repatriation flights for Vietnamese nationals brought down a deputy foreign minister and a former deputy head of immigration at the Ministry of Public Security, among others.

The Viet A testing scandal felled two members of the elite VCP Central Committee, a former minister of health, and senior members of the vaunted Vietnam People’s Army. To date, the party has investigated over 21 people.

Corruption is endemic in Vietnam. And yet these corruption scandals seem all the more concerning than those over the past five to six years when senior officials weaponized police and the prosecutorial service to take down political rivals and their patronage networks.

The VCP knows it has a legitimacy crisis. The government recently acknowledged that in 2021 there were 3,725 corruption investigations and criminal proceedings, three times the number in 2020.

For an economy stuck between central planning and the market, with soft property rights, where the state controls key inputs such as land and capital, not to mention permits and licenses, there is no shortage of opportunities for graft. But where corruption was once seen as the cost of doing business, it is now viewed as predatory and hindering economic growth.

The Hanoi Party Committee has been in turmoil, following the Viet A corruption scandal that saw its chief, Chu Ngoc Anh, expelled from the party and put on trial. The new Party chief is trying to curry favor, while his new deputy is clearly being groomed for greater things.

For ambitious Party cadres, keeping clean right now is necessary, but insufficient. General Secretary Nguyen Phu Trong continues to make counter-corruption his highest priority. But advancement will require those added flourishes, such as loudspeakers extolling the good works of the Party.

Someone, somewhere, actually thought that this was a good idea. While loudspeakers blaring state media, party edicts, and propaganda may not be heard over the cacophony of Hanoi’s congested streets, they will be heard in the corridors of power.